Inspired by Sonavor's recent effort to characterize the amplifier performance of a Beomaster 8000 after replacing all signal path opamps, my Australian customer asked that the same would be done to his 8000 before sending it back (after upgrading its circuit with a muting function for the FM section while the Phono input is selected to eliminate crosstalk).

And I am glad he asked. It turns out that it is a great idea to replace the opamps when performing a full restoration of the Beomaster 8000. My measurements yielded a 14 dBV improvement of the THD (Total Harmonic Distortion) performance on the left channel after implementing new opamps.

This shows the preamplifier and input selector board with the original opamps in place: 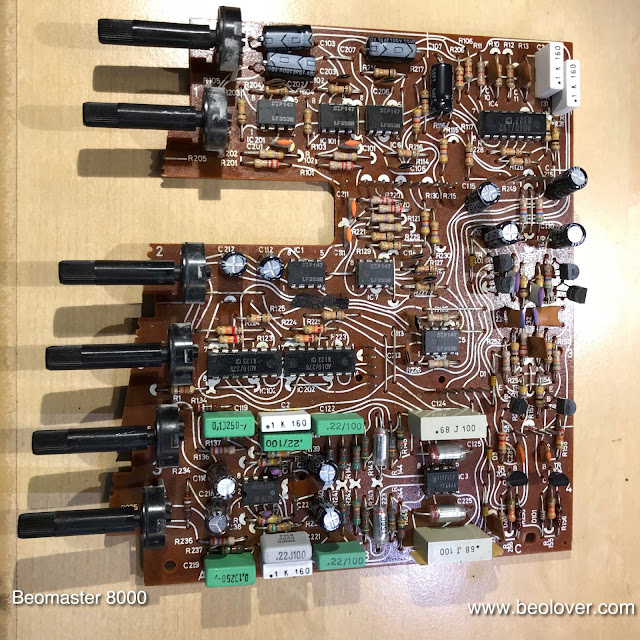 and after replacing them with new LF353 units (except the phono input, which was replaced with a low noise LM833 type): 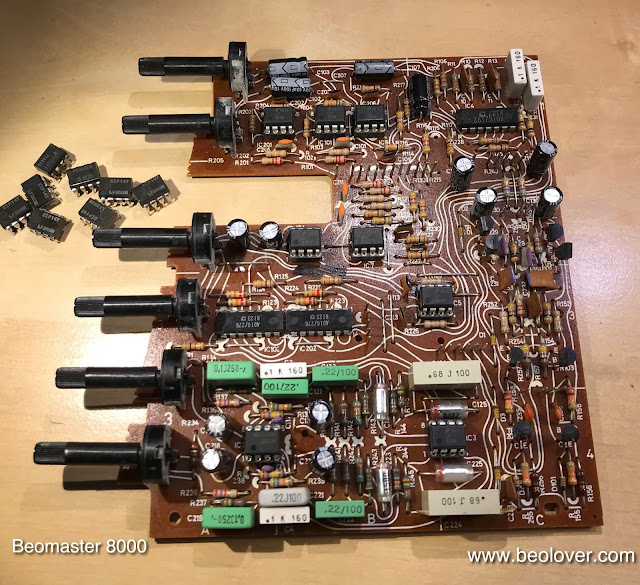 I used IC sockets to spare the opamps the stress of soldering. Probably not necessary, but then why not. I did the same for the control panel PCB. This shows it with new LF353s in place: 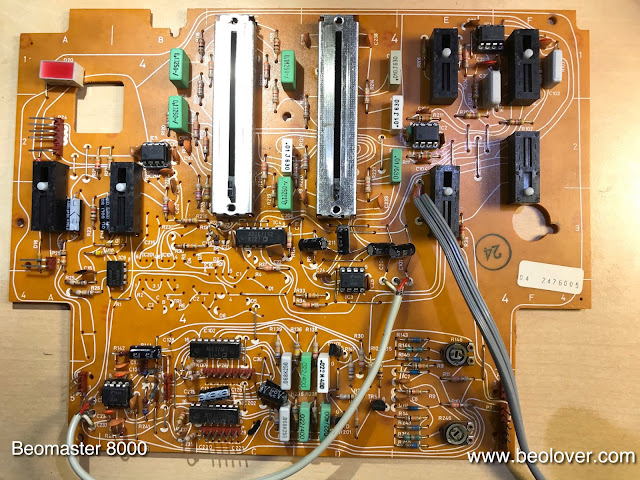 After putting the control panel back together I performed a series of measurements to see if the amplifier performance would measure up to the values given in the service manual. It turned out that such a comparison is difficult to make due to the inherently different measurement methodology used in the 80s and with the instrumentation that is available today. But I think the measurements below show that this 8000 is now in good shape.

Let the fun begin:
I use a Quant Asylum QA400 audio analyzer for such measurements. Essentially this device yields a Fast Fourier Transform (FFT) of the audio signal that is put into it, and it can perform some measurements (i.e. calculations on the FFT spectrum) based on that data. The measurements include power, total harmonic distortion, signal-to-noise, and frequency response.
Let's have a look at the output spectrum measured with a 0 dBV 1 kHz signal at the Tape 1 input of the Beomaster: 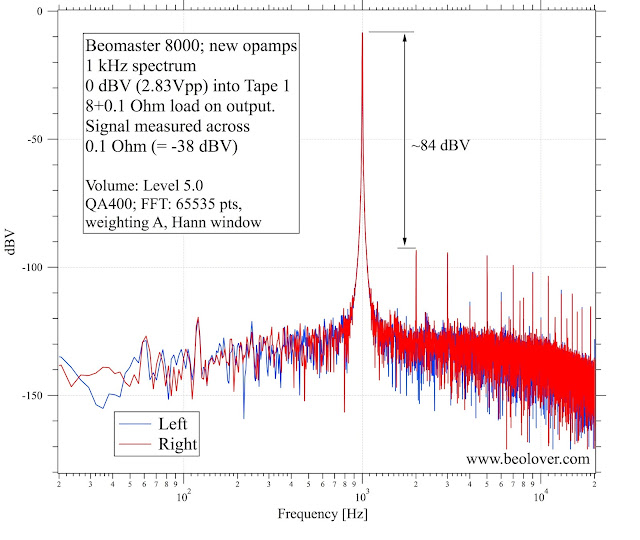 The dBV values essentially give the amplitude ('level') of the signal relative to a standard 1Vrms signal V0. Since level=20*log(V/V0), a signal change of 20dBV corresponds to a 10x change of the amplitude. As an example, if the measured amplitude of the 1kHz signal at the output of the amplifier is 10 Vrms with an input signal of 1 Vrms from the waveform generator, then level=20*log(10/1)=20*1=20 dBV. If the output signal were 100 Vrms, the level gain would be 40 dBV and so on.

Looking at the spectrum above, you probably wondered why the 1 kHz peak is only at about -8 dBV, while the amplifier operated at a volume setting of 5.0, which is close to the maximum output amplitude it can muster. The reason is that the measurement was performed via a voltage divider that was connected as load at the output of the amplifier. The divider was built from two 4 Ohm 50W power resistors and a 0.1 Ohm 3W resistor in series. This shows the setup: 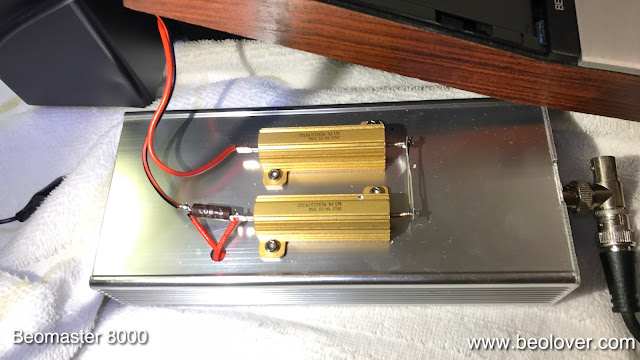 Since the Beomaster is able to produce 100W output power into an 8 Ohm load, the resistors need to be mounted on a heat sink. I used a RF amplifier can that I had laying around from another project. The Y-shaped red wires that are soldered to the small 0.1 Ohm resistor connect to the BNC jack on the right side of the RF can, which then is connected to the QA400 input. The resistor chain is connected on the left to the speaker jack of the Beomaster. This setup guarantees that the QA400 input never gets more than about 1 Vpp. But it also means that the output amplitude that the QA400 'sees' is only 1/81th of the actual amplitude that is applied across the 8.1 Ohms.
Using the above level=20*log(V/V0) formula, we can calculate that the level difference due to the voltage divider is about -38dBV (20*log(1/81)=-38.17 dBV). This means that the 1 kHz peak in the above graph would be at ~-8+38dBV=~+30dBV. I could have shifted the peaks in the graph, but since all measurements that are performed are inherently differences between two levels, this shift really does not matter, i.e. in the following all levels are just as they came out of the QA400, i.e. -38dBV lower than the real signals.

So what do we see in the above spectra? Mainly the THD spectrum to the left of the main 1 kHz peak and some noise. We can see that the 1st harmonic at 2 kHz is about -84 dBV weaker than the main peak. According to the above calculation, this means that the amplitude of that distortion is about 10^4 (= 10,000) times weaker than the main signal. Well below what a human ear could notice. The -84 dBV value is close to the THD measurement result of the QA400, which came in at about -82 dBV (=0.008%). The measurement is a bit worse than the 84 dBV value determined from the graph since there are higher order THD peaks that add to the total distortion. This was the only measurement result that changed before and after replacing the opamps in the signal path. My initial measurements of the left channel yielded a measly -68 dBV THD value, and after the opamp exchange this was improved to -82 dBV. So I think it is a great idea to replace all opamps when the boards are upgraded with new capacitors, just to be on the safe side.

So how does this value compare to the THD value from the Beomaster 8000 service manual? The value stated there is "< 0.05%". So we could be happy and say: "Wow this 8000 is almost 10x better than the value in the manual!". Not so fast, I would think, since the manual states that the measurements were performed according to the "IHF A-202" standard. At this point I do not know what this means, i.e. we need to postpone this comparison with the stated values. But I think we can confidently say that this Beomaster is performing reasonably well and is probably within the original specifications.

Another interesting measurement to perform on an amplifier is its signal to noise (SNR) ratio. This essentially gives us a number that qualifies how much stronger the signal is relative to the noise ("hiss") of the amplifier. This measurement is a bit more difficult to do and understand since we are comparing a defined signal peak amplitude (or power) with a diffuse noise background that is composed of a continuum of frequencies spanning the entire audible range and beyond.

I played a bit with the QA400 settings and it turned out that the SNR measurement is strongly dependent on the number of samples used for the FFT transformation of the input signal. I was able to "change" the SNR value from 65 dBV to 88 dBV simply by changing the FFT resolution from 8196 samples to 65535 samples. This means that depending on the setting the SNR value changed by a factor of 10, one full magnitude. So what is happening? A bit of reading up on the internet and a semi-cryptic response from the Quant Asylum tech support suggested that at lower FFT resolutions the main 1 kHz peak spreads out over several 'frequency bins', thereby lifting the spectral power outside the 1 kHz line, which is misunderstood by the FFT algorithm as part of the noise. This means that at higher FFT resolutions this 'frequency spill out' becomes less pronounced. So we can assume that the higher value is closer to the true value, even though the true value may be even better. Unfortunately the QA400 can only go to 65535 samples, i.e. we would need to find better equipment for an answer.
Wondering about this topic, I performed an experiment that would allow me circumventing the FFT based calculation of the SNR. I measured the signal power of the spectrum at various FFT resolutions and it turned out that the PWR value is not significantly dependent on the resolution. This makes sense since PWR measures the power of the entire spectrum, i.e. integrates over the entire frequency range. So resolution is of limited importance, as long as the signal peak is still 'caught' in one of the sampled frequency bins.
This realization enables a basic SNR measurement: Measure the PWR value with the signal present at the amplifier input and then ground the input and measure again. Subtract the two values and the SNR is obtained.
My measurements yielded on both channels -8 dBV with 1 kHz signal (at Volume setting 5.0) and -98 dBV with the input grounded (also at Volume 5.0). The difference is 90 dBV, a bit better than the best 88 dBV value measured via FFT analysis. This compares to a ">77 dB" stated in the service manual. Again, we do not really know at this point how the 77 dB value was measured, but I think we are on the safe side and can conclude that this Beomaster 8000 is operating on spec.

Another interesting measurement is the frequency response ("FR"). The QA400 does this measurement by sending a square pulse into the input of the amplifier and then measuring the response at the output. Since a square pulse contains all wavelengths, the FFT of the response yields a true spectrum of the amplifier FR. I verified this by manually measuring the transmission for a few frequencies and the FR curves were exactly matched, i.e. I think we can believe this measurement as it comes out of the QA400. This shows the FR spectrum measured on both channels: 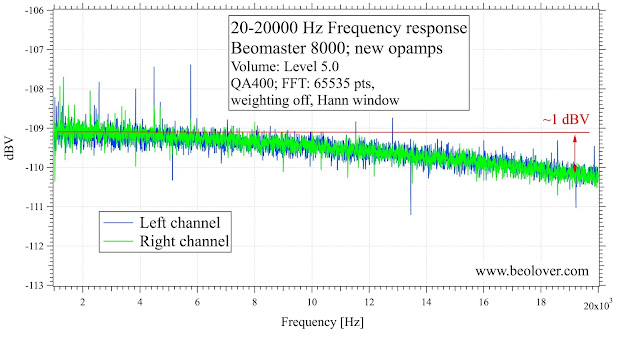 I cut the spectrum off at 1 kHz since there was some 60 Hz noise, and the FR drop at 20 kHz seems typically referenced to 1 kHz. So what we see from the graph is that there is a 1 dBV drop from 1 kHz to 20 kHz. The manual prescribes 0.5 dBV, but of course, again, we do not know how this was measured etc...A difference of 0.5 dBV corresponds to a signal ratio of 10^(0.5/20)=1.06, i.e. the signal at 20 kHz is 6% smaller than it should be. Not very dramatic, and most likely this discrepancy is a result of the different measurement methodologies that were applied in the 80s.

Since everything was hooked up, I decided to measure the FRs for the various filters the 8000 has. This shows the spectra: 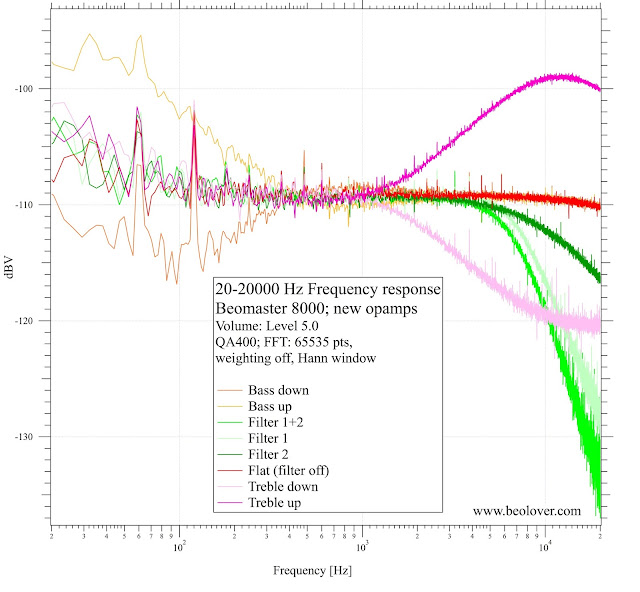 The spectra show the FR for filter 1, 2 and both active, for bass and treble sliders set to minimum and maximum, and the flat (filter button "off") response in direct comparison. We can see nicely that the treble and bass sliders allow a ~±10 dBV change of the higher and lower frequency ranges, and that the filters cut off around 7 kHz and 10 kHz at  as prescribed in the manual.

So in summary, I think we can say that this Beomaster is in excellent condition and that everything works as it should.