Measurements with a Spectrum Analyzer - What Does the dBm Readout Really Mean?

Last year I was given a broken Beomaster 3000-2, and I recently decided to fix it up. It turned out that the tuner has some problems. So I started learning abut FM stereo transmission and RF in general. At some point I started wondering about doing proper radio frequency (RF) measurements and characterizations etc.... I have access to a spectrum analyzer and after playing with it for a bit I was wondering what the 'mysterious' dBm units mean it uses to display its peaks. Well, a visit to wikipedia told me that this stands for dB relative to a power of 1 mW. Great! So what does this mean? Let's look at the formula:

This formula means that dBm gives us the power of the signal relative to a standard 1 mW signal. Why not 1W?...convention. In fact, there is also dBW, which is power relative to, you guessed it, 1W!

So far so good...but what does it really mean? What confused me was "where is this 'measured power' that is compared to 1mW actually measured"? Let's imagine for a moment that we are a Spectrum Analyzer. Sitting inside our enclosure, we see the world through the connector on the front panel, i.e. the measured power must be measured inside the enclosure! not anywhere in the 'device under test' (DUT) where the analyzer is connected to! This is where the 'input impedance' of the analyzer comes into play. On the input of my analyzer it says '50 Ohm'. What this means is that we can basically think of the entire expensive analyzer as a 50 Ohm resistor connected between the input and ground. In other words, when the analyzer is connected to the DUT, then we actually load the DUT output with a 50 Ohm load.

Now it gets pretty straight forward: The measured power in the analyzer is the power dissipated in the 50 Ohm resistor. In other words, if we know the RMS voltage on the input of the analyzer then we can calculate the power in the resistor, and understand the dBm readout.

The 50 Ohm, 1 MOhm resistors and the 15 pF capacitor are the internal impedances of the generator, analyzer and oscilloscope. The oscilloscope also has a capacitive impedance, which is 15 pF.

(BTW: this great little schematic was made with iCircuit for iPad...a fantastic way to spend $10! Very easy to play with circuits to understand electronics concepts. The kicker: It does real time simulation while you play with circuit components - give it a try!)

My goal in the experiment was to verify that the analyzer indeed gives me a 0 dBm readout if the power dissipated in the 50 Ohm impedance of the analyzer is 1 mW.

This photo shows the readout of the spectrum analyzer after playing with the waveform generator amplitude to achieve an exact 0.00 dBm peak value of the 10.7 MHz peak.: 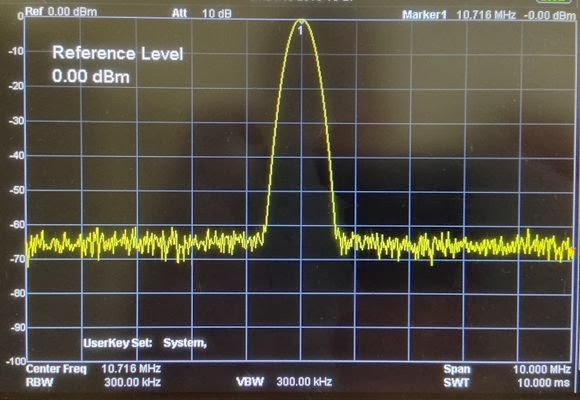 Here is the waveform generator screen: 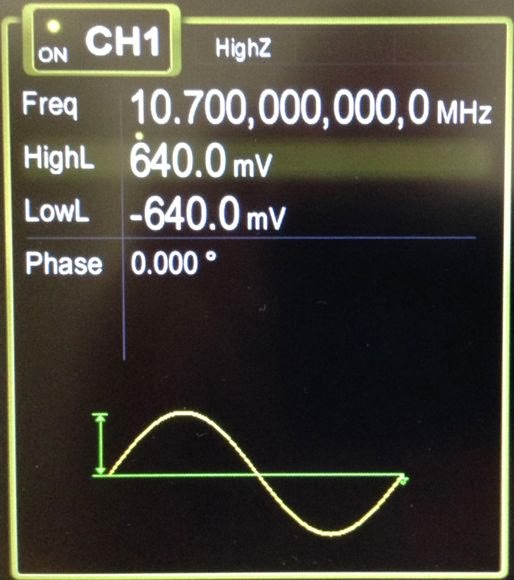 This means that a 0.64V amplitude apparently delivers 1 mW (0 dBm) into the analyzer 50 Ohm impedance. If the above circuit holds, we should get half this amplitude (0.32V) at the input of the analyzer. A look at the oscilloscope shows this: 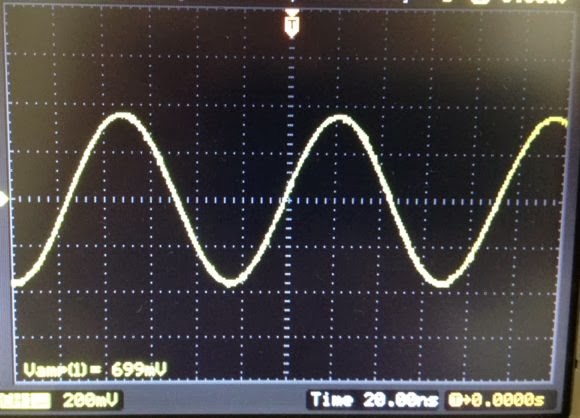 The Rigol DS 1052 apparently measures amplitude across the entire ±wave form. It shows a value of 699 mV, corresponding to a true signal amplitude of 0.35 V, i.e. a bit more than half of the 0.64V shown on the function generator. The 'bit more' is probably a measurement problem. It cannot be explained by the oscilloscope impedance, which should have reduced the reading a bit. Pretty close, though! Lets calculate the power using the presumed 50% (0.32V) amplitude at the analyzer input:

While reading up on spectrum analyzers, I learned that they actually work pretty much like a FM tuner. Like a tuner, they work best at a certain input power level. It appears that actually attenuating the signal with a calibrated BNC attenuation 'pad' to a -20dB level or so may be a good idea to protect the fairly sensitive inputs of these devices as long as one has a strong enough signal. This is a bit like using a 1:10 oscilloscope probe as long as your voltages are not too low....this protects the oscilloscope input from too high voltages. For further reading: There is a great (but also rather long) introduction to spectrum analyzers from Agilent. It is posted here: http://cp.literature.agilent.com/litweb/pdf/5952-0292.pdf

Yesterday the U264B prescaler ICs arrived from Germany and the UK. I bought two batches of Telefunken NOS ICs from to make sure I would have something that actually works. It turned out that both batches worked. I guess now I have enough U264Bs to last me for the next 40 years. This does feel good...;-).
I unsoldered the old chip (series TFK 208). Before: 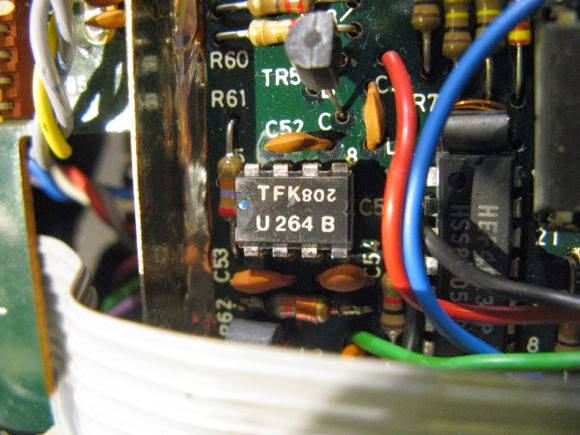 The new one I put in using a DIP8 socket. I wanted to test all the U264Bs I received, and this enabled a fast swapping of the chips. Here are the pics of the empty socket and with a new old TFK 225 installed: 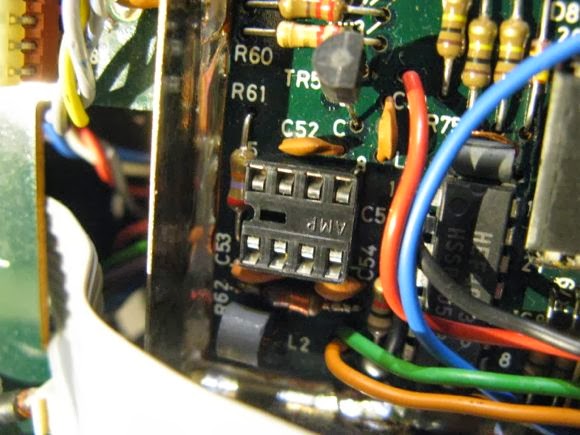 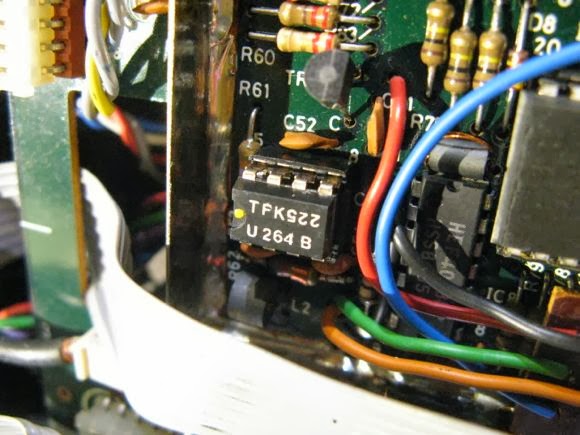 I also got some series 234 and they also worked. This puts the question to rest whether the series number matters...it does not. The tuner works very nicely now. However, I wonder why this IC died. Maybe it is time to consider putting some TVS diodes on the power rails to prevent over-voltages.
On a general note, I always run my B&O on uninterruptible power supplies to keep them safe from the all to often occurring brown outs and voltage spikes in our 3rd world style power grid.

One more comment about the defect U264B: When I measured the voltage at pin 1, the meter showed only about 1.2V instead of the value of 3.3 in the circuit diagram. The replacement chips showed a value of 3.25V. Maybe this can be used to identify a broken chip if one is far from an oscilloscope.
Posted by beolover at 11:43 PM No comments: