Today I rebuilt the right output stage. I put in new electrolytic capacitors and replaced the no-signal current trimmer. It was a good idea since a look at the old one revealed that it was intermittent when turning it. Adjusting the voltage between TP200/201 to 18 mV according to spec yielded a nice cool heat sink, even after a 1hr run. Here are before and after pics: 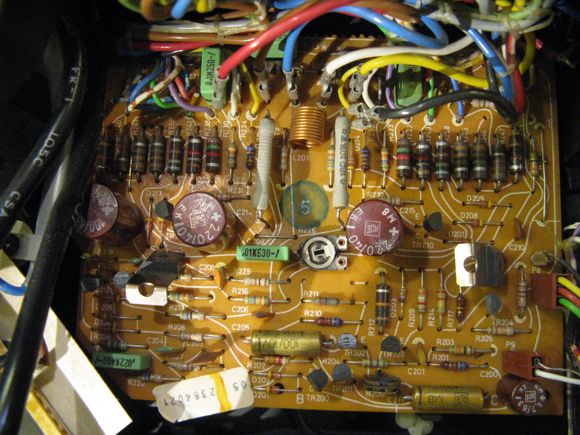 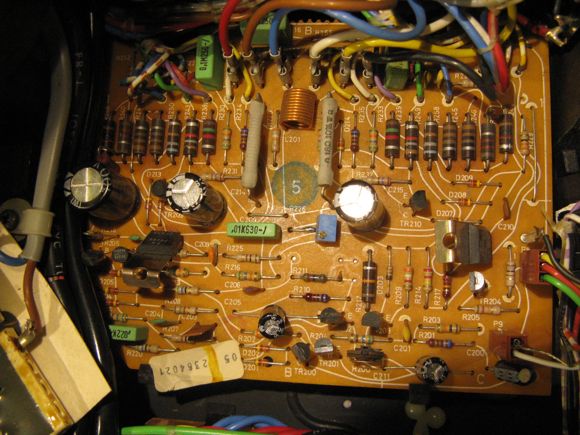 At the end I adjusted the offset of the differential amplifier input with R200 to 0mV at the speaker jack. On to the left channel!

This is turning into a fully blown addiction. I bought a third Beomaster 8000!!! Of course broken...gotta have some fun! Today, I finally opened it up with the plan to bring it on line slowly. I disconnected the 45V power supply from the output stages (pulled red and black cables on L and R output boards). The purpose was to avoid a potential burnout of the output transistors in case the trimmers have contact problems. After disconnecting, I checked the main capacitors on board 6 (power supply) to see if they still work. They showed reasonable values. Then I connected the Beomaster to the mains. Without pressing a button, it immediately showed some random segments on the displays: 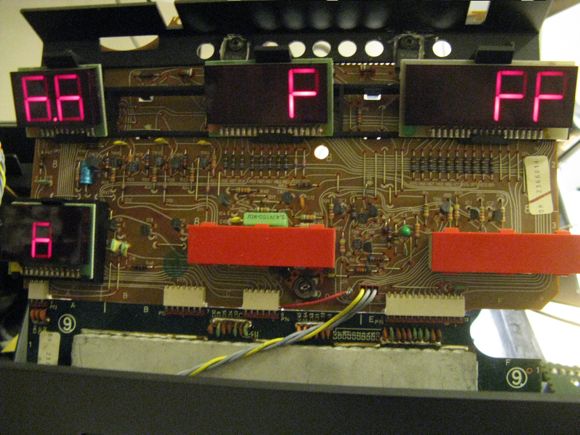 No response to any buttons. This made me think and pull out the circuit schematics. After some study I came to the conclusion that it is time to check the voltages relevant for the microcontroller and the displays. I measured on P48 on board 6 that the pins that should carry 5V only measured 2V. This means that the microcontroller is starved below its minimum voltage of about 2.7V. The circuit diagram shows that these pins are directly connected to the output of the 5V voltage regulator. That left practically only one possibility (aside from an (unlikely) short somewhere on the microcontroller board): C35 must be bad. Indeed a measurement with my capacitance meter indicated a capacitance of 2.3 nF instead of 10 uF. I immediately replaced the capacitor with a new one. Plugged the Beomaster back in and it started up normally. After pressing a button I got this: 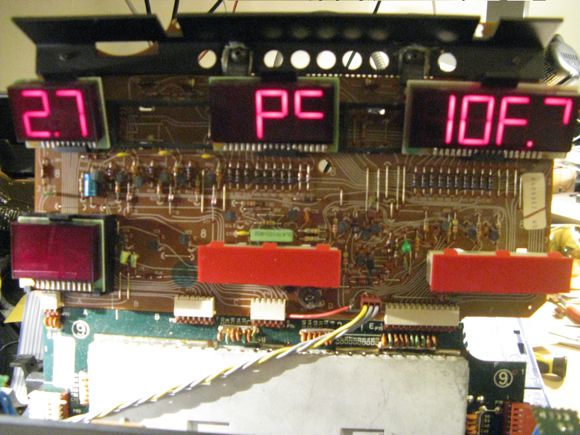 As usual, several segments are dead and these displays need to be refurbished. A worrisome phenomenon: No response to turning the volume encoder...well, it would be boring if they always had the same problems. More about this in the near future.
Posted by beolover at 12:37 AM No comments:

Recently I bought some used vinyls on ebay to relive some youth memories. Also I like to use my lovely Beogram 4002 once in a while. Spotify is cool, but just does not have that vinyl feel...;-). Unfortunately, once the vinyls arrived I had to acknowledge that they were in bad shape...one of my less exciting ebay experiences. They played pretty rough, lots of dirt in the grooves. Not many scratches, though. Anyway, emboldened by a recent experience with Mr. Clean "Magic Eraser" pads, which allowed me to restore the brushed aluminum panels of my various Beomasters to practically new condition, I put one of the pads to one of the dirty ebay records. A previously unthinkable way to treat a cherished record, but here I did not have any choice! To my amazement, the record now sounds much better. The distortion in the voice parts and trebles is much reduced, also crackle is much less.
Here is what I did:
I wet the pad, then put it with relatively firm pressure on the record, which was situated on a towel on the floor. I moved the pad in concentric motions around the tracks covering the entire disc. I took care to not touch the label in the middle to not damage it. A little bit of foam developed from the detergent of the pad. One can feel how the micro foam grips into the grooves-the pad 'wants' to move in a concentric orbit around the record because of this. After a few rounds, I rinsed the record thoroughly with tap water and then with some filtered water from the fridge to remove minerals from the tap. The label got a bit wet/drenched by this treatment, but it dried after without visible traces.
Then I put the record back on the towel and dried it in concentric motions with an old t-shirt.
Done.
After this I also cleaned the stylus of the 4002 with the pad. Under the microscope I observed how the crud came off...the needle looks now like new again. Quite impressive!
Mr. Clean Rocks!!...;-). Enjoy!
Posted by beolover at 12:05 PM No comments: