A Beomaster 6000 (2253) arrived on my bench for some TLC. It came with an indication of 'the volume adjustment makes strange noises'. I opened it up and as expected I found a slack volume servo belt that was not able to drive the volume potentiometer all the way anymore due to slipping. This phenomenon was responsible for the noises when the potentiometer got stuck. I replaced the belt with an EPDM O-ring of the correct size and that restored the volume function. Here is an impression of the new belt installed: 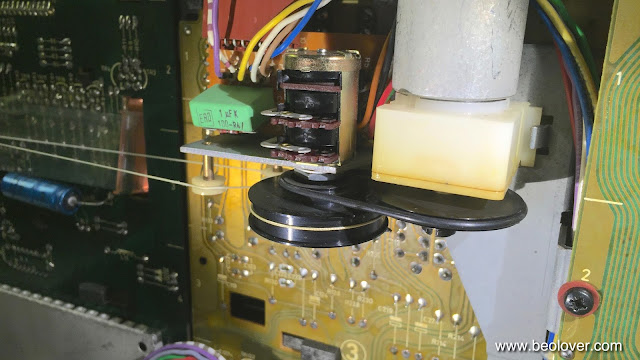 While I tested the units other functions I noticed that the heat sink very quickly developed a pretty high temperature in the center area. This indicated that the right channel at least runs at a too high quiescent current. This is a common phenomenon in this generation of Beomasters due to the often corroded quiescent current adjustment trimmers. As they increase their resistance due to the formation of an oxide film the current gets ramped up. In the extreme this results in a burn out of the output transistors of the respective channel. This means this Beomaster should quickly receive modern multi-turn encapsulated trimmers for long-term stability.

Posted by beolover at 3:29 PM No comments:

Beogram 8002: First Contact, Exchanging the Electrolytic Capacitors and a Lesson About the Importance of Decoupling Capacitors for Microcontrollers

I recently obtained a Beogram 8002 in decent cosmetic condition. As usual, the aluminum panels had come loose, though: 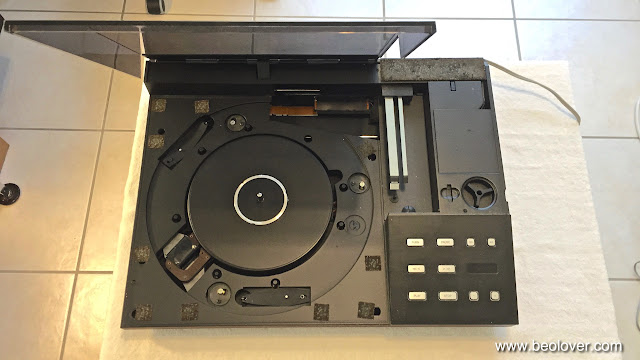 After loosening the transport locks, decoupling the suspension springs, taking out the plate below the arms and removing the two screws that hold the top part of the enclosure to the bottom part on the left, I put the unit into service position. Then I plugged it in. Nothing. No red LED dot in the display and no response to any of the buttons. It appeared that, as is often the case with unadulterated Beogram 8002 (or 8000) that come out of storage, the reservoir capacitors of the power supply had gone bad. This usually prevents the processor from operating and that is the end of it.
I decided to replace all electrolytic capacitors and then do some more troubleshooting in case that would not fix the issue.

This shows the circuit board after removing it from the Beogram: 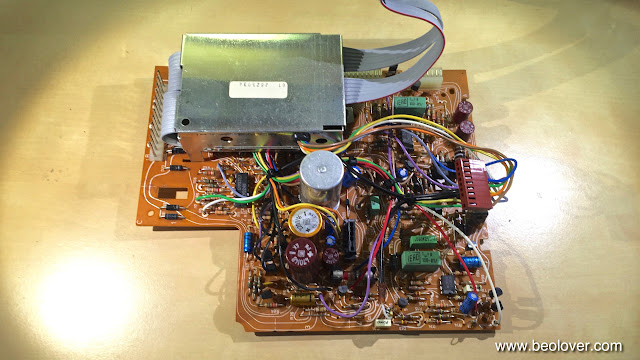 Here some details. This shows the reservoir capacitors of the power supplies: 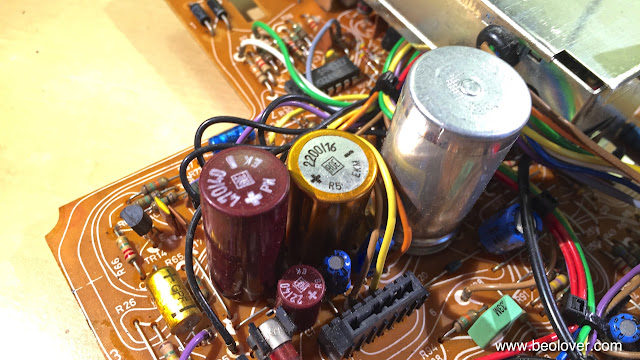 I replaced all the electrolytic capacitors with quality Japanese 105C grade units: 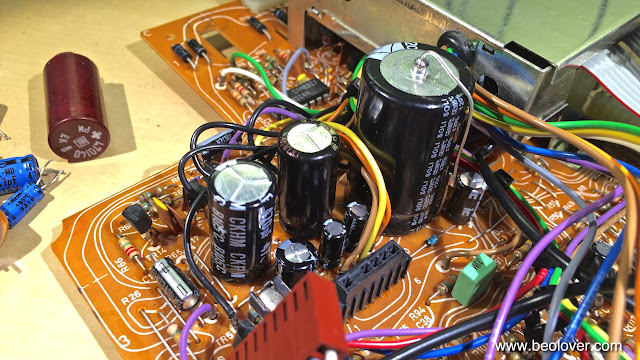 There is one more big capacitor that needs replacing. It is located in the power transformer 'brick' that can be removed from the units and allows configuring them for different grid voltages. This shows the original 47uF unipolar capacitor (C1): 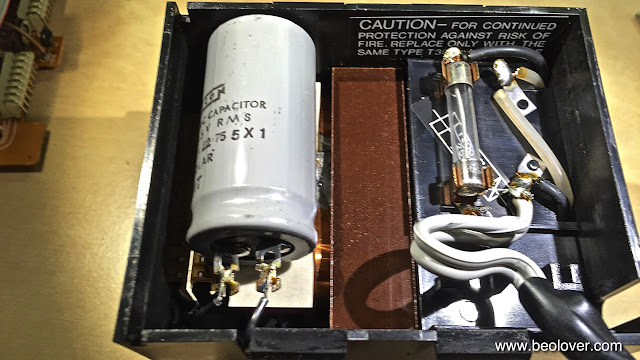 This capacitor acts as coupling capacitor for the two linear motor coils and gives them the desired phase shift. This is similar to the phase shift capacitor found in the AC motor Beogram 4002 and Beogram 4000 models which have run on two-phase motors. Probably due to the large size of 1980s unipolar capacitors this unit was put into the power brick. I replaced it with two modern bipolar 100uF units connected back to back in series: 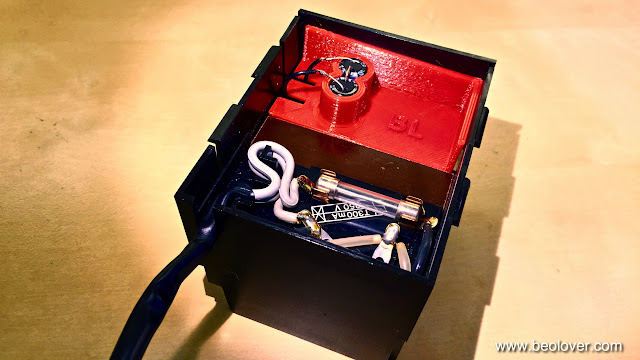 Due to their small modern size it was necessary to design a fixture to hold them in place. I designed a 3D printed part that filled the vacant space in the power brick: 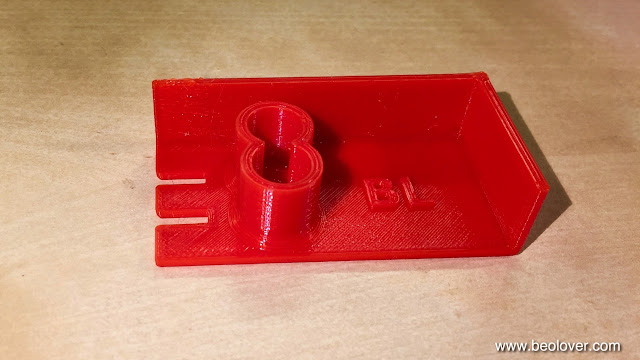 What was left after exchanging these capacitors were the two 5V voltage regulator capacitors soldered directly to the board that holds the 5V regulator and the +15V TIP32 transistor mounted to the bottom of the enclosure for heat transfer purposes. Unfortunately, I forgot to take pictures of these caps.
The final capacitor to exchange was the sole 47u electrolytic decoupling capacitor in the uProcessor can. It sits under the small board that holds the 4013 flipflop (IC7) that stores the tacho disk readout coming from the speed sensor (IC1) for evaluation by the microcontroller. 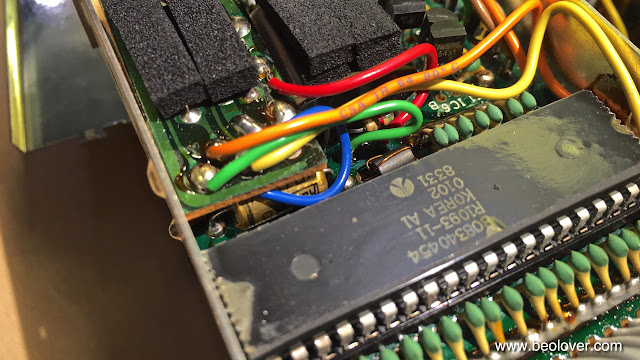 This shows the original capacitor after pulling up the flipflop board: 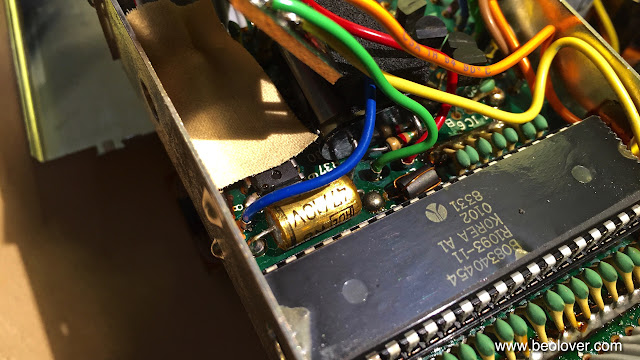 I replaced it with a new capacitor: 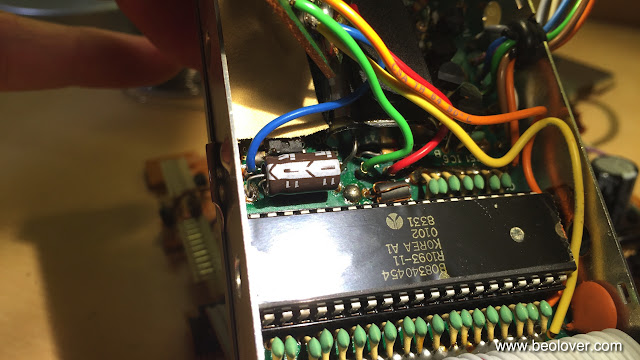 Note the solder point to the left of the capacitor where it is supposed to connect to GND. I forgot to solder it on the upper side, and that is where an interesting journey began that allowed me to 'explore' the 8000 and 8002 Beograms a bit more in depth...;-).

At this point I finally put the PCB back into the Beogram and then plugged it in. On the positive side it gave me a life sign on the display, indicating that power was restored. On the negative side the life sign was not a singular LED dot indicating readiness to operate, but it showed me "0.0.0.0." instead. Pressing buttons on the keypad yielded no response. Disappointing!

I unplugged it and then plugged it back in and the display showed "1.1.1.1.". Very mysterious I thought! After a few more plugging in and outs it assumed the normal state and I was able to activate "Play". The arm started moving and everything seemed fine. Well, I repeated the plugging cycle one more time and I was back to "0.0.0.0.". At this point it dawned on me that the microcontroller had a hard time to start into its 'ground state' when power was connected, and that it rather entered a random state preventing it from executing its firmware. Since it seemed to occasionally end up in the proper state and then worked, I thought there was a problem with the controller itself. So I did an interesting experiment:

Since I only had one 8002 at hand but several 8000s, I extracted the uProcessor from a 8000 and plugged it into the 8002 instead of its original processor. The result was that nothing changed. Occasionally it would work but mostly not. I then replaced the entire 8002 processor can with the one from the 8000. And everything was normal! This is an interesting result by itself since it establishes that one can indeed run a 8002 with the processor of the 8000. Even the "<" and ">" arrows on the 8002 sensor arm work properly since they get their power via an analog circuit that depends on the direction of the carriage movement. There may still be some minor differences with regard to updated operational or control behaviors but basically the 8000 processor seems to have a very similar if not the same firmware on it.

This told me that the 8002 processor was o.k. but that it had a difficult time to reset during the establishment of the 5V power rail during power-up. I then figured out that by manually resetting the processor (via briefly connecting the junction between R74 and R76 to GND) after plugging the deck in, I was able to reliably start it up into the 'ground state' and after that everything seemed normal.

All this finally got me thinking about the power supply of the processor and I finally realized that the 47u coupling capacitor was not connected to GND due to the missing solder point on the component side, which is the only connection to GND of this capacitor. The bottom solder point is not connected, i.e. is only there for mechanical stability.

I added some solder to the top point and then the deck worked (mostly) normally. The only issue I could see immediately was that the carriage moved at significantly different speeds in in- and out-directions. But this is the topic of another post...