The Beomaster 8000 boards are all recapped. The output amplifier boards were exercised and passed their bench test. The remainder of the components have to be tested reassembled in the Beomaster so I think now is a good time to see where I am actually at with this restoration.

I want to check the Beomaster power supply with everything back in the cabinet. I also want to see what the condition actually is on the microcomputer and display boards. Since this Beomaster arrived in a non-working state I don't really know if those two boards have any issues aside from the electrolytic capacitors.

So here goes...
It is difficult to really document clearly with pictures where every cable connection goes. The best thing to do is label the connectors as you are disassembling them and take lots of pictures.

Here are a few pictures of the reassembly of the Preamplifier, FM, FM Interface, Filter & Tone Controls and Microcomputer boards. 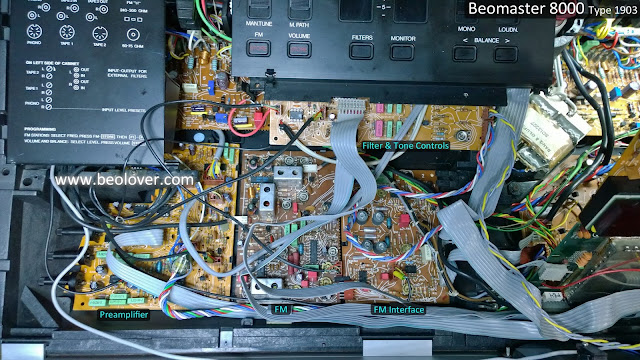 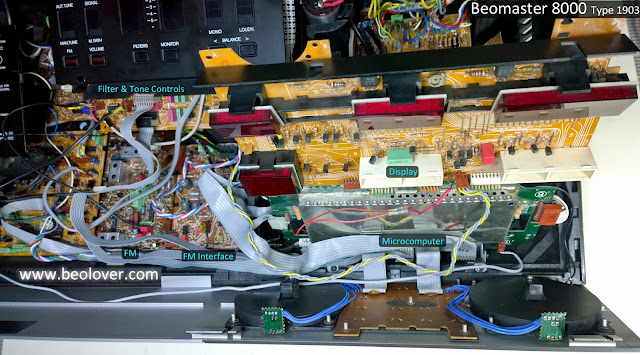 After a double and triple check of the wiring I plugged the Beomaster power cord into my bench AC power strip. This looks promising. It means I at least have +5V power.  The Beomaster correctly comes up in Standby mode. 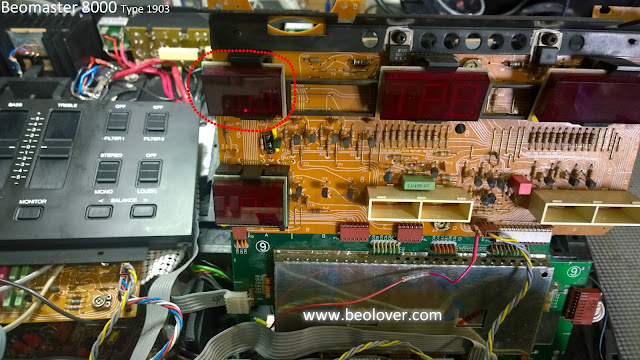 Time to check the voltage regulators.
First the +5V even though I know it has to be working. I still want to measure the input and output of the regulator. 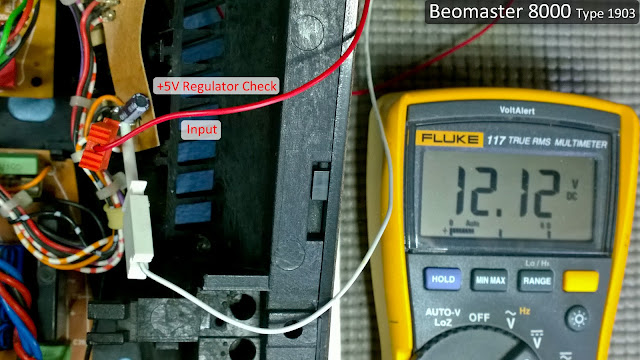 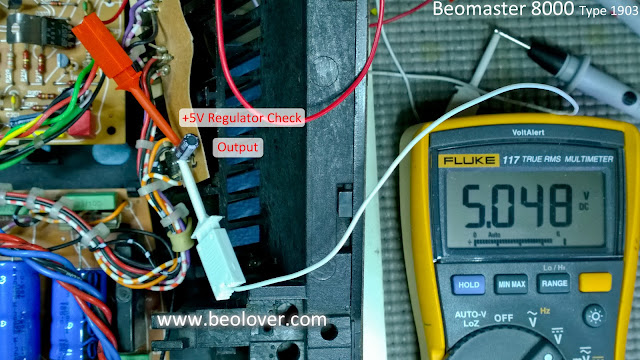 Now to check the ±15V regulators. I like to use TP1 or TP2 mode to first take the Beomaster out of Standby.  I selected TP2 in this case and that quickly reveals the display segments do have faulty LEDs.  I was expecting that but it needed to be confirmed. 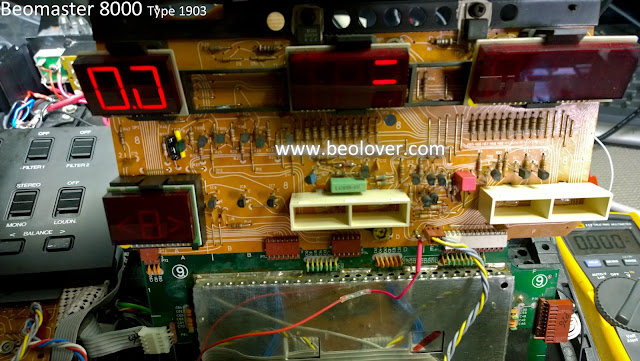 Checking the -15V regulator I can see its input and output are good. 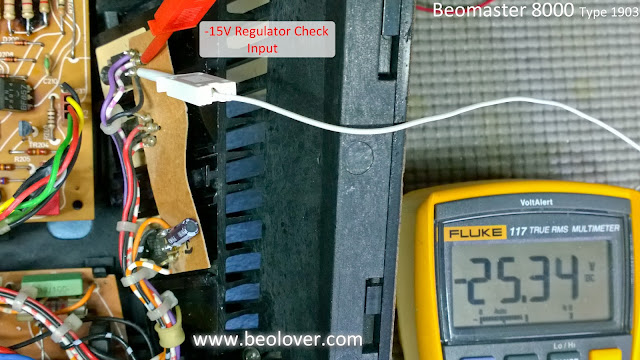 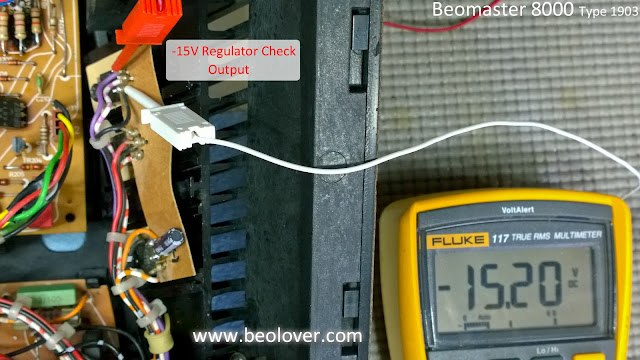 Not good news on the +15V regulator. The output is bad. 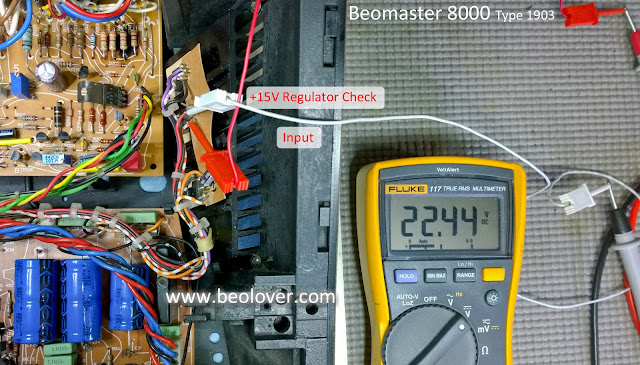 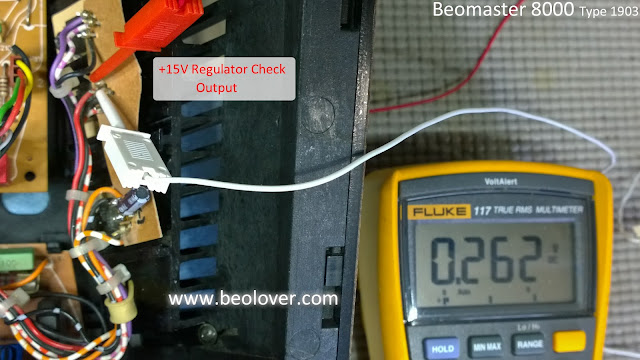 That isn't a big deal though as these regulators are easy to come by and the location of the component makes it easy to replace.

I also checked the ±55V reservoir capacitor voltages. This picture shows that it is at 56V which is fine. 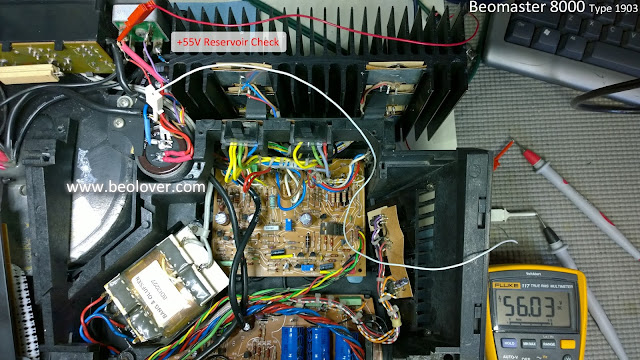 I am happy with the test results. Nothing major.  Importantly, the microcomputer appears to be great. The display board has bad segments but the plan was to change those LEDs out anyway. The +15V regulator failure should be easy to deal with. I will replace the regulator, proceed with the display LED replacement and perform the preventative measure of replacing the microcomputer crystal oscillator devices.

That should keep me busy for a while. Once those steps are complete I should be able to put the Beomaster in operational mode, recheck the no-load current and DC offset in the output amplifier and give the receiver a listen.


Posted by sonavoraudio at 8:00 PM