Before we send a restored unit back to a customer, we always give them a good 'real world' test, where we simply play a bunch of lovely music over a couple weeks and observe if everything works consistently. The listening part is of course part of the fun of Beoloving! There is always music in the work shop! The case of a recently restored Beogram 4000 is a proof in point of the usefulness of such testing phases: While playing a number of records, I noticed that occasionally the arm would not return to the home position once the end groove had been reached. Normally, the Beogram 4000 detects the end groove spiral due to the higher speed of the carriage and then lifts the arm and returns the carriage. Not in this case, though, where the needle simply went all the way in and then kept playing the final turn over and over again...tock...tock...tock...not very Beolovely!

The problem was that this would only happen occasionally, but most times everything would be fine. Such problems are hard to troubleshoot. In the beginning I thought it was simply a MV switch issue (most 4000 issues come from not working switches), but since I had coated the switch terminals with gold, tests demonstrated that the switch was working very reliably. So I concluded the problem must be in the differential stop circuit, which produces the logic DS level that tells the control system that it is time to lift the arm and return the carriage home. This shows the relevant part of the Beogram 4000 circuit:

This is how it works: The detection of the end groove is done via the carriage motor voltage. Since the end groove typically makes the carriage move faster, the motor voltage is larger than during normal play back of a track. That is why the circuit is called Differential Stop (DS), the end groove is not determined by the position of the arm, but by its velocity towards the center of the record. One of the issues is that the arms do not only move faster in the end groove, but also between tracks and in the run in groove at the outer rim of the record. This problem is solved by introducing a carriage activated switch ("MV") that enables the DS circuit only close to the end groove region of the record. This switch is on the second circuit diagram of the 4000 and it connects MV and MV' in the above circuit snippet.
So when the carriage reaches a point about 65mm away from the center of the record MV and MV' are connected. This causes the voltage that is applied across the motor to be applied across base and emitter of TR24 via 1R54 and trimmer 1VR4. The trimmer is used to adjust the carriage speed threshold at which TR24 turns on (this adjustment turned out to be the critical item during this exploration...read on...;-). When TR24 turns on due to high carriage speed, it then turns on TR23 which serves as an additional input that allows other functions of the turntable to disable the DS circuit (mainly system requested and manual FF function via TR25). When TR23 turns on TR22 becomes conductive and grounds its collector. This causes the logic signal DS to go to 0V. DS then activates carriage return via the logic ICs in the control panel. This immediately turns off the DS circuit since the motor voltage reverses (the MV switch remains closed until the carriage clears the switch on the way back to home position). The result is an about 5-10ms pulse at DS as is shown in this oscilloscope snap shot: 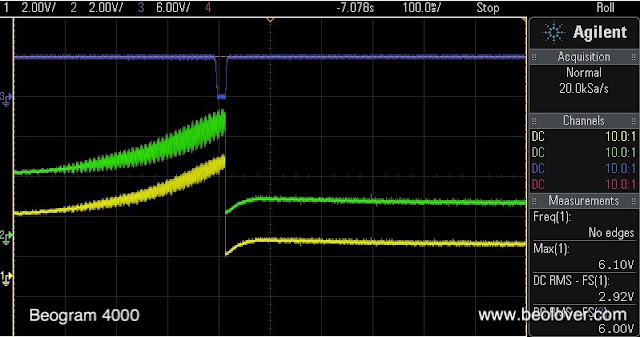 The blue trace is the DS signal. Green and yellow are the (motor) voltage measured on both ends of the MV switch against GND (since it is closed at this moment both traces are the same).
We see that when the motor voltage changes due to the reversal of the carriage direction the pulse terminates.

Ok after this circuit discussion...back to the 'issue' that I was trying to solve, the occasional not working of the DS mechanism:
After I verified that the MV switch worked reliably, I thought the issue must be an intermittent problem with the DS circuit. Since the issue was very intermittent, I used an Arduino as event recorder: 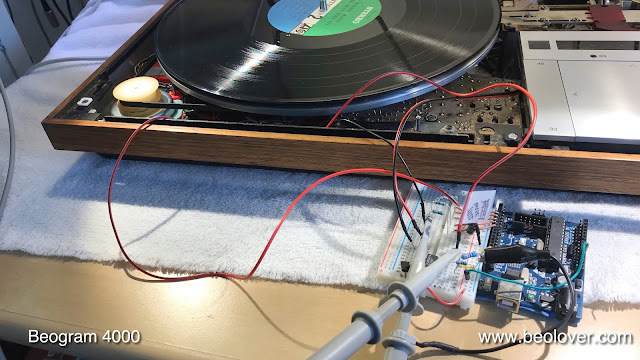 I used one of the pin change interrupts to detect the state of DS and print it out on the serial port whenever it would change from 6V to 0V, i.e. when the circuit activated DS. Then I played some records and waited for the issue to happen. Luckily the second record I played triggered the issue. And, guess what, DS indeed did not change. This told me that the issue is in the circuit. I played another record, and it worked again. Then I put on the previous record and it happened again! This finally turned on some light bulbs in my head. I put the other record on and it worked again! The light became very bright in my head and I concluded: It is the record, dummy! The circuit was basically working, but the records are different! This shows the end grooves of the two records in comparison: First the one that made DS work properly: 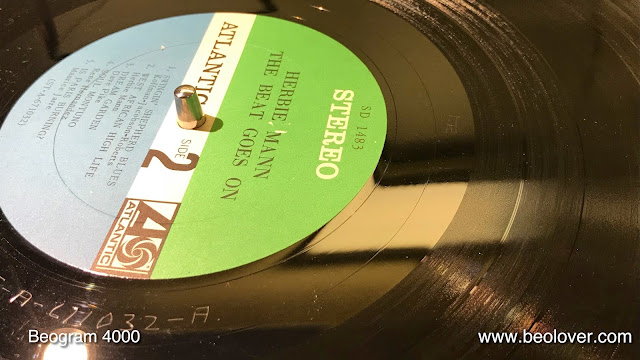 and the one that caused DS to fail: 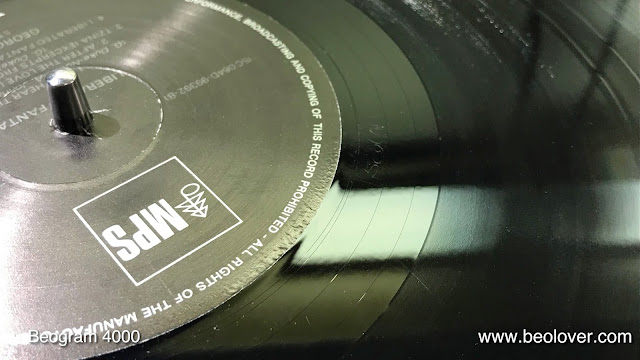 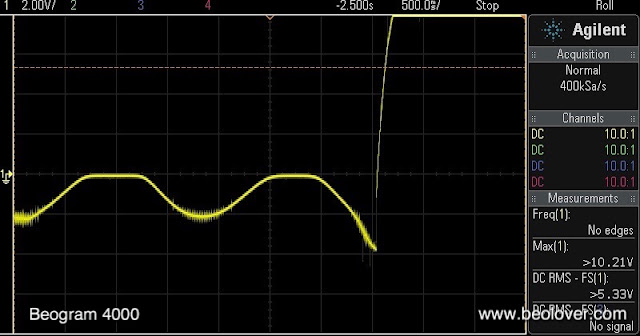 The waves on the left are the normal voltage fluctuations on the motor as a track is played. Then as the end groove begins the voltage goes down and then the shoots up as the voltage across the motor is large enough to trigger TR24. So it appears that the non-triggering record simply did not cause the voltage to cross the threshold. I ended up adjusting the VR4 trimmer a bit clockwise and then the mechanism worked also for the second record, yet still played the last track to the end (a good test for that is playing a single, since their single track usually extends into 'MV switch closed territory'). So in the end, nothing was wrong, just the adjustment needed to be changed a bit towards more sensitivity.
An interesting thing to note is that the service manual prescribes to adjust the sensitivity that DS gets triggered at 1.8V motor voltage. This is obviously too sensitive since the amplitude of the waves in the oscilloscope trace above is about 2.2V. If the threshold were adjusted to 1.8V DS would be triggered during normal playback and not only in the end groove. The joys of analog control systems!