It seems that the Beomaster 4400 that I am currently restoring is now mostly working. After I bridged all the cracked traces on PCB#6 I finally had a stable Phono input and a working AFC. But then I realized that the right channel Phono input did not yield much in terms of low frequencies and was lower in overall volume compared to the left channel. The tape inputs were working, so this indicated that the RIAA equalization on that channel did not work properly. Here is the relevant part of the circuit diagram: 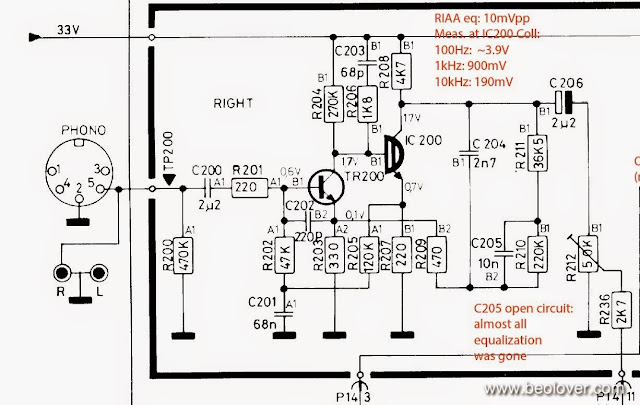 I added some benchmarks measured on the left channel in the diagram. Input was 10mVpp. This yielded ~3.9V at 100Hz, 900mV at 1kHz, and ~190mV at 10kHz, corresponding to an about 20x drop between 100Hz and 10kHz (=26dB). This conforms with the RIAA curve as shown here (from this very interesting article about different ways to achieve RIAA equalization - another proof that anything can become a complicated topic if one only digs deep enough...;-): 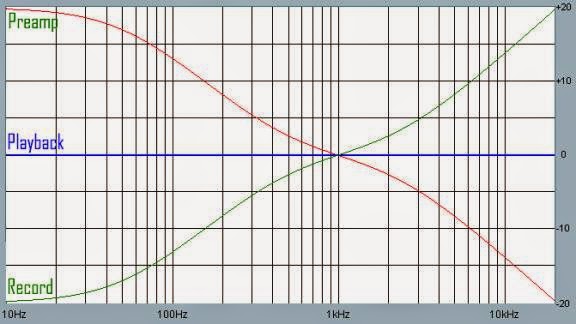 The red curve is the one that the Phono input needs to achieve. What is coming from the record follows the green curve, i.e. low frequencies are recorded at a much lower volume than high frequencies.
The main reasons for doing this are (1) to increase the playback time and (2) to reduce high frequency noise. Lower frequencies need more space in the groove for the same amplitude output than higher frequencies. This is a consequence of the fact that the current induced in the moving coil of the cartridge is based on the speed at which the iron moves relative to the coil. If one would want to achieve low freq reproduction at the same level as high freqs, the grooves would need to be much wider, which would significantly reduce the play length. By accepting a lower amplitude for low freqs the grooves can be kept narrow and so the record plays longer.
Higher frequencies benefit from being cut at higher amplitudes since that gives a larger signal-to-noise ratio at the upper end of the spectrum. The 'natural' noise of records comes from roughness of the vinyl material, which generates a noise floor. Since during playback the RIAA curve reduces the high frequencies relative to the lower frequencies, the vinyl noise is reduced. This is a similar concept to Dolby NR where low volume sections of the recorded signal are amplified on the tape, and then reduced during playback, which also reduces the tape noise.

Anyway, anything that changes the signal depending on frequency immediately 'smells' like a capacitor issue. The two capacitors in the Phono preamp circuit that are responsible for the RIAA equalization are C105 and C104. And sure enough one of the corresponding units on the right channel circuit, C205, gave me a strange reading. My capacitance meter yielded a fluctuating signal, while C105 yielded a solid 10nF reading.
So I put in two replacements (it is best to do such things in pairs to keep the channels even). Since I did not have 2% tolerance caps available, I went through he batch I had and measured them until I found two that had the exact same value of 10.2nF, i.e were in spec. I soldered them in: 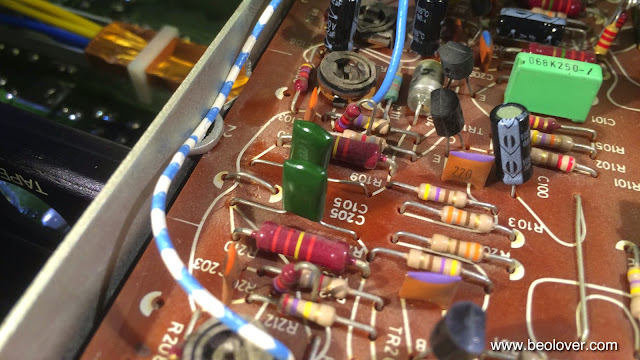 And tested the unit with a 10mV signal on both inputs. The signals were very even on both channels through the entire frequency range. Very good! I put things back together and hooked up the Beogram 4000 that I just restored, and pure bliss! I listened to Autobahn by Kraftwerk on the original German first pressing double album, and all was good!

While I listened, I decided to explore the topic a bit more and I made a model of the Phono pre-amp in iCircuit (an absolutely great app for spontaneous circuit explorations - not as powerful as a Spice simulator, but so much more pleasant to use - give it a try: iCircuit costs less than a couple high-cal drinks at Starbucks..;-). Here is a screenshot of the model: 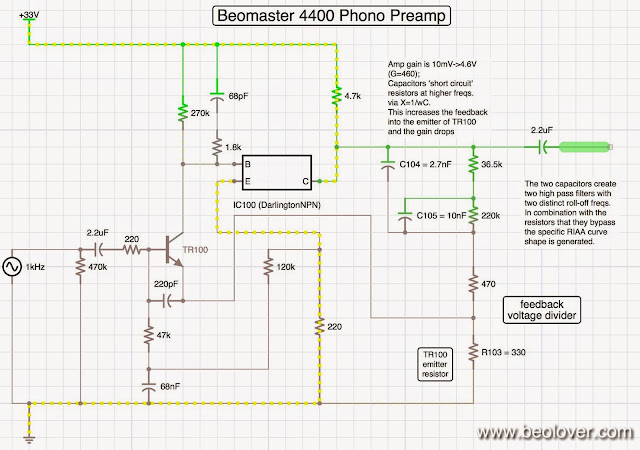 The simulation pretty much confirmed the measurements that I made on the 4400 unit. I rearranged the  circuit components a bit to make more clear how this RIAA equalization works.

The voltage divider at the output formed by the three 36.5, 220k, and 470 Ohm resistors and the emitter resistor R103 (330 Ohm) determine the gain of the amplifier via feedback. Without C104 and C105 the gain of the amplifier is ~460 across the entire frequency spectrum, i.e. 10mV at the input generate 4.6V at the output. The RIAA equalization is produced by adding the two capacitors that reduce the 36.5k and 220k resistor values depending on frequency. This reduces the upper end of the voltage divider more and more with increasing frequencies, hence, increasing the feedback and in consequence reducing the gain. This has the effect that the output of the amp is reduced at higher frequencies, and we get the RIAA equalization.

In this context I was wondering about the failure mode of C205. I think it must have partially short circuited the 220k resistor causing a reduction of the base gain of the amplifier. Since this affects the low end more than the high in this circuit, it appeared to the listener (me) as if the low end was missing.

Anyway, this seems to be fixed now! Kraftwerk! Autobahn!