The Beogram 4000 that I am currently restoring exhibited a quite nasty hum when I initially hooked it up to my Beomaster 6000 and played a record. This was strange since the Beogram 4000 has the same grounding setup as the Beogram 4002, and my 4002 has no hum at all when connected to my Beomaster 6000. The only difference between the two models in terms of grounding and hum etc...is the non-shielded mains transformer in the 4000. The later models all have shielded transformers that sit in metal cans. I am not sure if this matters, but this seems to be the only real difference. Both have double shielded DIN 5 cables and their chassises are floating. So a strange thing...but then this is a grounding issue, and they can sometimes be pretty strange. I measured the resistances between signal, and system grounds and the chassis, and everything seems to be up to spec. The transformer is also fully insulated, so there is no direct galvanic connection anywhere. So the only thing that comes to my mind at this point is EM interference from the transformer.

It turned out that when I tied the signal and system grounds together, the hum was completely gone. So I decided to install a switch that allows to connect the two grounds or leave them separate, depending on what works best with whatever amplifier the Beogram is connected to. In essence, connecting the two grounds establishes the same setup as in a Beogram 4004, which is the latest 400x grounding configuration. Maybe B&O went through a learning curve with regard to grounding and hum etc...and they decided to tie everything together. In my opinion this is the best way to do it anyway since this creates low impedance connections between all the grounding leads, which results in much less susceptibility to EM interference.

I made a figure that summarizes the grounding and signal setup in the Beogram 4000: 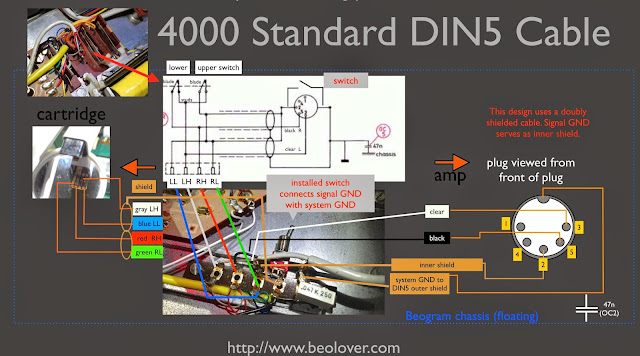 The figure shows the switch. I used a toggle switch that I soldered directly to the DIN5 cable terminal, where it ties signal and system grounds when flipped to the left. When switched to the right, the grounds are separated, which is the original configuration.

The upper left picture also shows the grounding relay that is activated by the tonearm solenoid when the arm goes down. The terminals are connected in a non-intuitive way, where on both switches the contact studs (points) are tied together and carry the left channel signal, while the lower blade carries the right channel and the upper blade is connected to signal ground (exactly like shown on the circuit schematic). When the two switches close when the tonearm is up, everything is connected together, muting the signal to the amplifier.