Today I completed the replacement of all electrolytic capacitors in the Beomaster 4400 (2419) that I am currently restoring. I also replaced the quiescent current trimmers of the output stages. This is probably the most important item to do in these models due to the design of the output stages. If these trimmers go open circuit due to old age, the output transistors immediately die, i.e. whenever one opens up this model, these trimmers should be replaced and the quiet current adjusted properly.
But first I removed the input/output board that is bolted underneath the main PCB. Here you see it still bolted on: 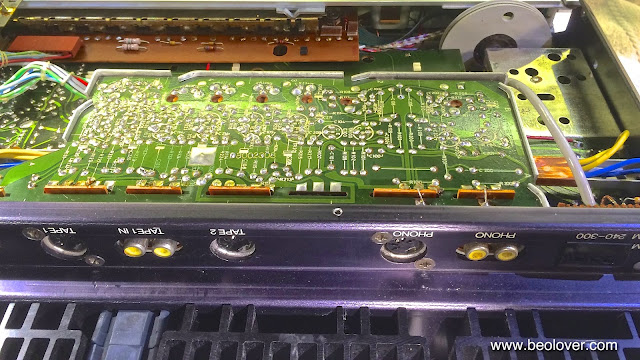 It is easy to remove it. It is only held with the four screws next to the Tape 1 and Phono jacks. Take the screws out and the board can be removed: 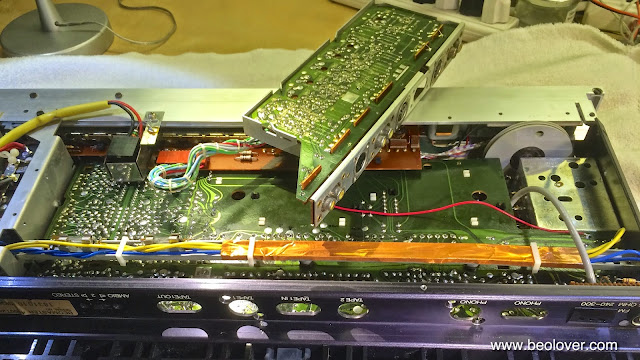 It is connected with one wire-to-board connector to the system, so it is easily taken out. I really like the models they designed after they discovered the existence of such connectors. It makes it so much easier to work on them. The 4400 design is somewhere in between..still a lot of directly soldered connections, which can make id difficult to work on certain areas in these units. Anyway. Here it is taken out: 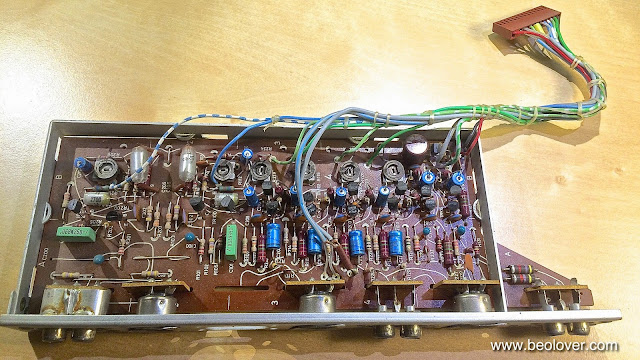 While I had it out, I decided to do the caps first. So I replaced everything with quality Japanese made 105C types for a long lasting restoration: 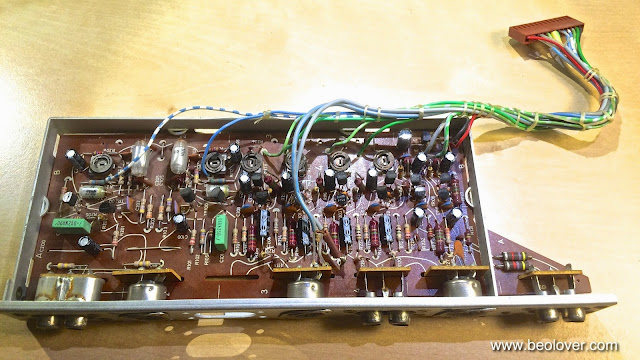 The next step was to remove the shield of the power switch. It makes it hard to get to a couple capacitors that are located underneath the switch. I did not want to touch the switch, and it seemed that after removing the shield, there would be enough space to get the task done. This shows the switch as I found it: 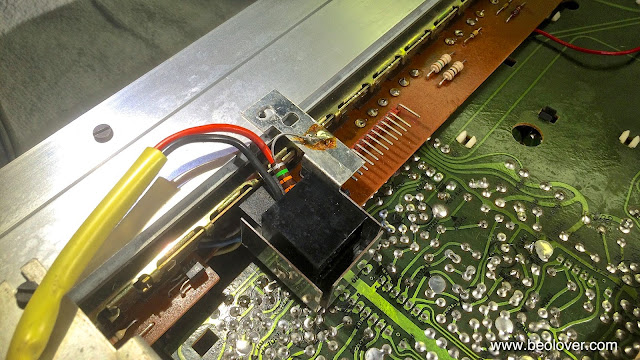 And here after unsoldering the resistor and taking the shield out: 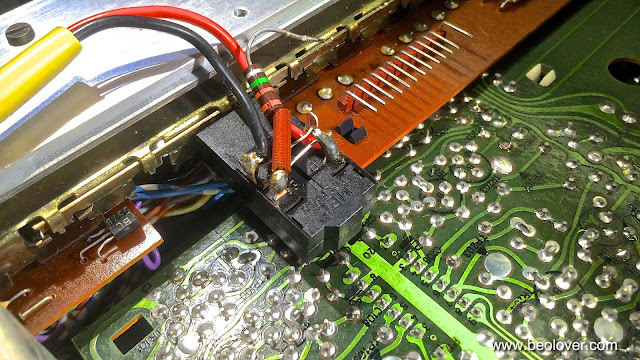 Then I replaced all the electrolytic caps on the main board and put in new trimmers. Here some impressions of the original condition:
Left channel and a view on the tone control and preamp section: 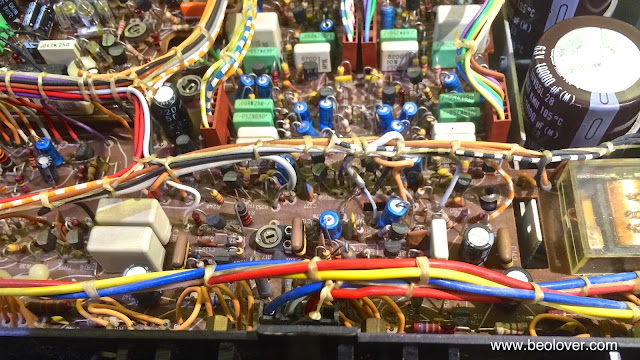 And the right channel: 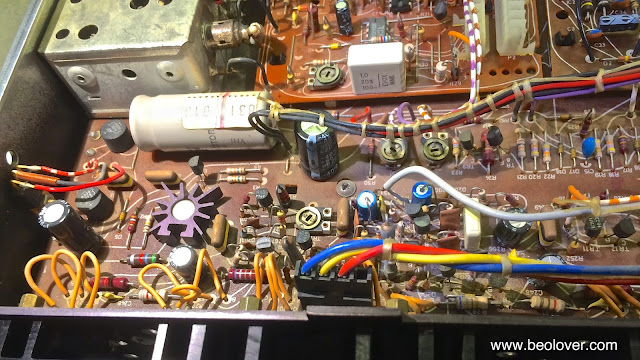 A few capacitors had been already replaced by a previous tech, but he used low grade 85C types, so I decided to bring everything up to 105C spec. Here are a couple pics:

This shows the left channel. I replaced the original single-turn 100 Ohm trimmers with 25 turn cermet trimmers. These are encapsulated and allow a precise adjustment of the quiet current that will remain without drifting over time. My experience shows that regular single turn trimmers can drift through repeated temperature changes, while the worm gear mechanism in a multi-turn trimmer will effectively prevent this, since the gear cannot turn as long as the 'worm' is not turning. This is the left channel: 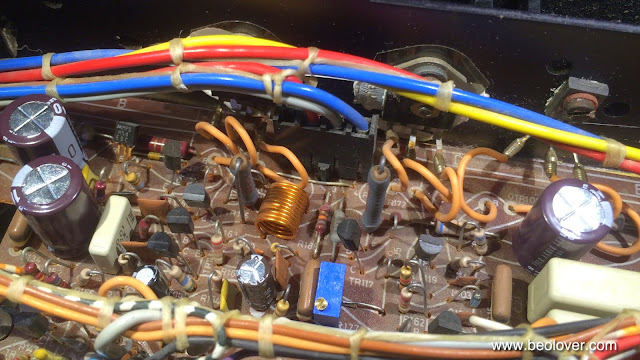 And here is the right: 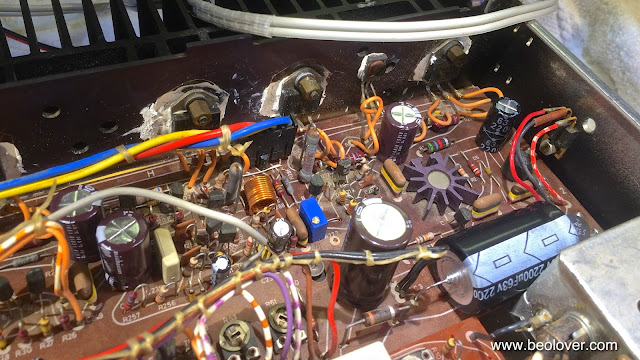 The next step was to adjust the quiescent current in both outputs. The manual prescribes to adjust it to 10-15mV across both emitter resistors in the output. The way the resistors were soldered in in this unit, it was more convenient to do the measurement just across one of them, and adjust to 50% of the above range. Here is how I did that: 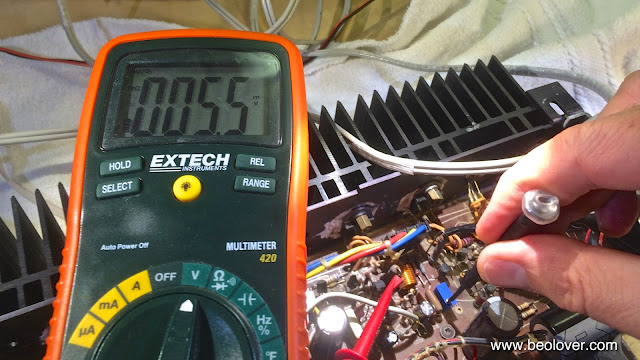 I prefer to adjust to the lower end of the range, since this will make it run much more cooly. I checked with the oscilloscope, and there was no measurable crossover distortion in this unit with this adjustment.

After all this I fired the unit up and I listened a bit to the radio. It sounded very nice, and the heatsinks stayed very cool. When I received the unit it it ran pretty hot, indicative of misadjusted or problematic trimmers. Even after extended periods of low-volume listening the heat sinks should never get warmer than 30-35C.
After the radio got boring, I decided to hook up the Beogram 4000 that I recently restored to try out the Phono input. And this was disappointing. It worked briefly, and then started cutting out intermittently on both channels. Still some issues I guess...time to explore the circuit diagram...I always enjoy doing that. This is Beolove!