I was recently sent a Beocord 9000 for some TLC. It came in its original B&O box and even double boxed. Unfortunately, whoever packed it put the B&O box upside down into the external box, so it probably did the trip upside down. Here are a couple pictures of the package. The original box saw some water damage at some point: 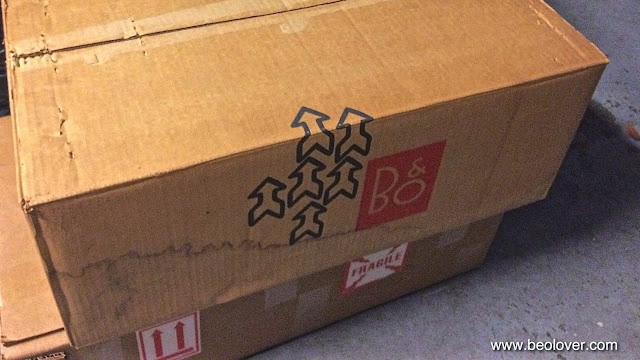 But the Beocord 9000 sat safely inside: 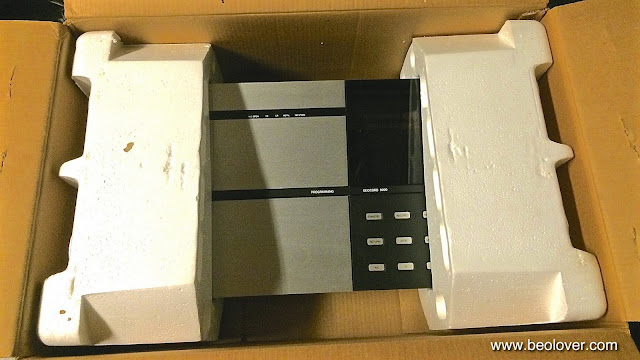 I never plug units in directly after unboxing, I rather like to open them up first to do a visual inspection. So I took it out of the box and opened it up: 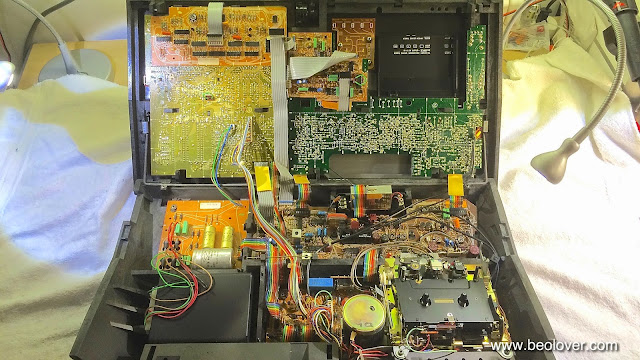 I really like how accessible these units are. No comparison to earlier model series. Two bolts at the back, and then it can be opened up like a clamshell. All that is missing are hydraulic shocks to open it up automatically..;-).
These decks usually have degraded belts at this age, so I unbolted the drive mechanism and flipped it around. This is a detail shot of the drive section: 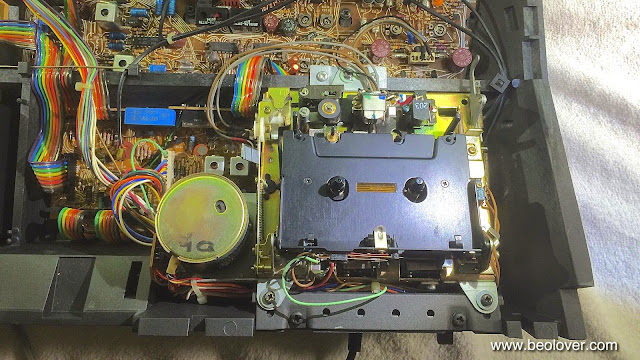 Three bolts hold the drive to the chassis. After taking them out it can be carefully turned around without having to unplug anything. It is a good idea to mark the position of the drive before loosening the bolts. This helps to get it into the right position when putting it back in, which is important for making the proper connection to the eject button: 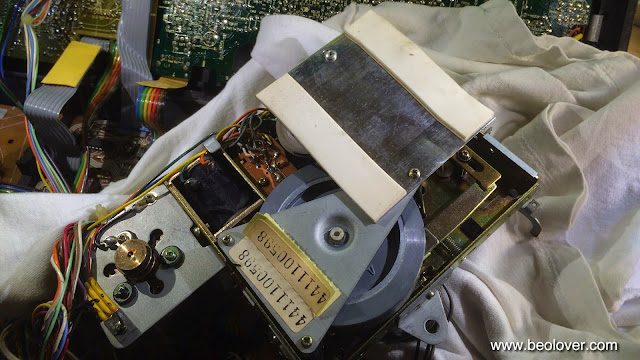 It is a good idea to cushion it with some cloth to avoid damage to the circuit boards and the delicate drive mechanism itself.
And as expected the belts were gone: 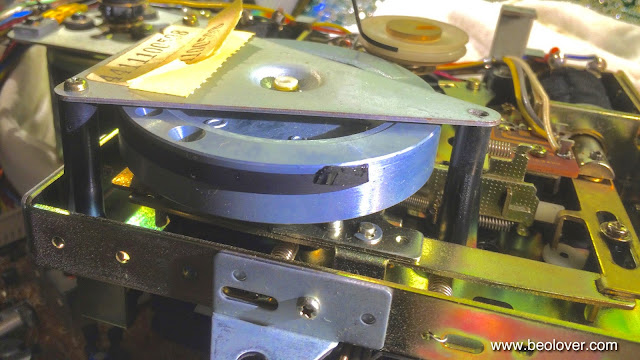 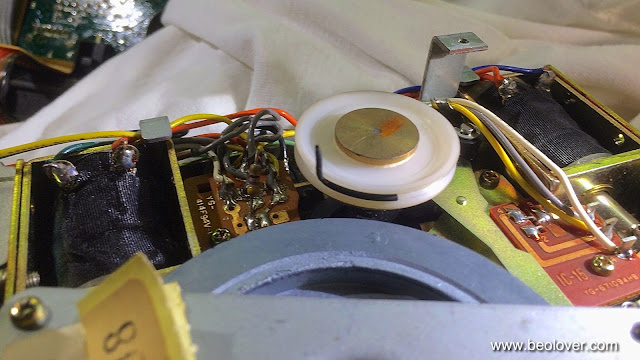 The curious thing about these belts is that they literally melt. This does not happen to the belts they used in their 1970s designs. Those belts just crack into pieces. But these here melt: 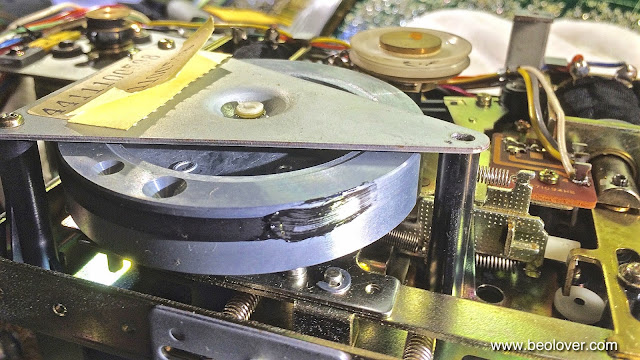 And what a mess this is. Since the belts seem break up into pieces and then go slimy, one can expect that the entire mechanism and the sections beneath the drive are covered with gooey nasty stuff that really sticks well to your hands and the wiring around the drive etc...The only good news here is that the stuff can be removed with ethanol. It is a good idea to wear gloves and have an ample supply of paper towel handy. This stuff is definitely messy! In this particular unit, someone already had a look before me, and that explains why the power cord and the DIN-to-RCA cable it came with were full of that black stuff. It just gets everywhere.

I removed the shield and the retaining plate for the flywheel and cleaned everything: 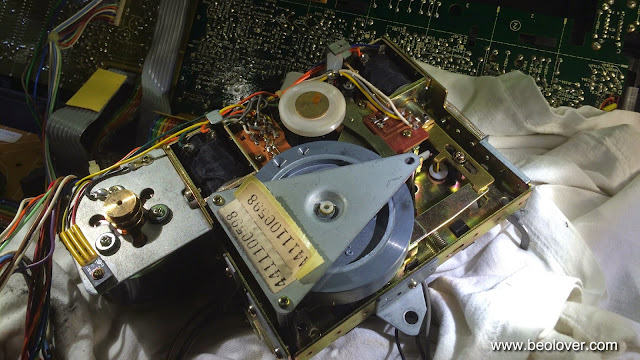 A lot of the black mess was on the drive pulley. I scraped it off as good as I could: 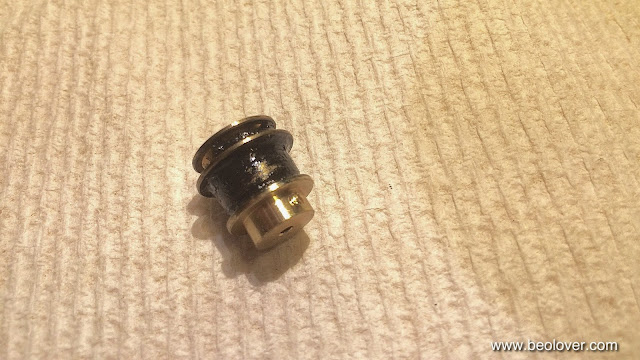 After that I put the pulley into ethanol over night 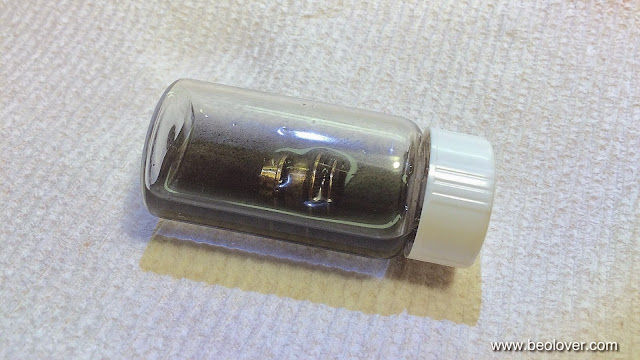 This removed most of the black goo. The last remnants came off when wiping it with some cloth. The it was time to install the belts. It is remarkable how easy it is to get the new belts installed in comparison to the Beocord 5000, where this process turns into a Saturday afternoon adventure. Here is almost as easy as popping in a tape into he deck: They just go on. The only thing to remember is that the flat belt goes first. Here is a picture with the belts installed: 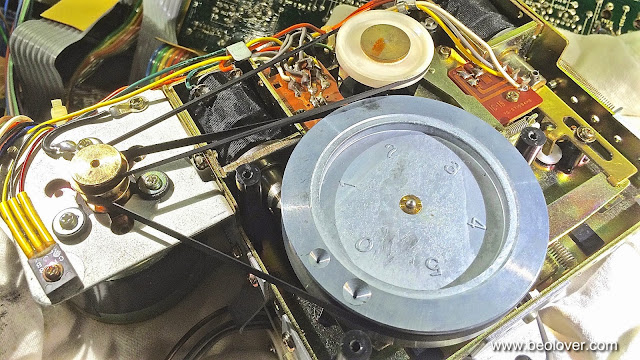 After I was done and had put the metal plates back on the drive mechanism, I realized that the DIN 7 jack of the deck had the usual broken tabs and was hanging loosely in its panel cutout. 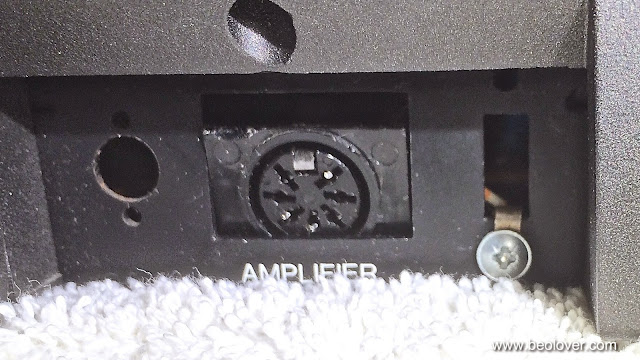 The jack is located right below the drive mechanism, so I decided to fix it before putting the drive mechanism back in. Luckily, this jack seems to be the exact same design as the Beomaster 8000 phono plug, one of which I fixed last year with 3D printed inserts. All I need to do is get some more of these inserts printed, and this should be fixed nicely. This will enable me to plug in a DIN cord without fuss for testing the functions of the deck. It is pretty difficult to get a plug in, if this jack is loose without opening up the deck to push it out, while plugging the cable in.