Beogram 4000: Replacing the Light Bulbs in the Control Panel with LEDs

After replacing the reservoir and motor capacitors in the Beogram 4000 that I am fixing up right now, it was time to give the light bulbs in the control panel some attention. I always like to replace all incandescent light bulbs with LEDs to make these units more stable for the long run. There really is no reason to stick with light bulbs except in a few situations where for circuit or vintage looks reasons bulbs are still the preferred solution. In the control panel, LEDs can be used without penalty since there is no direct path of the light to the outside. In this particular unit, one of the bulbs in the position scale was out, which rendered the entire scale dark since the two bulbs that illuminate it are in series.

I designed a small circuit board to hold two red/green SMD LED assemblies with their current limiting resistors designed to create a light mixture resembling incandescent light. I always use red/green LEDs if vintage scales with red indicators are to be illuminated. The reason is that amber LEDs that often can be used for incandescent bulb replacement do not emit red photons, and without them red items cannot be properly illuminated.
The two light bulbs that back-illuminate the RPM trimmers were replaced with standard high brightness red LEDs and appropriate current limiting resistors.
I made a brief video that shows the entire process from removing and opening up the control panel to inserting the LEDs and replacing the assembly back in the Beogram:

Here are a few pictures from the video:

These are the red/green LED assemblies for the scale illumination (Newark 75R0619 with 1.25k for red and 6k for green:) 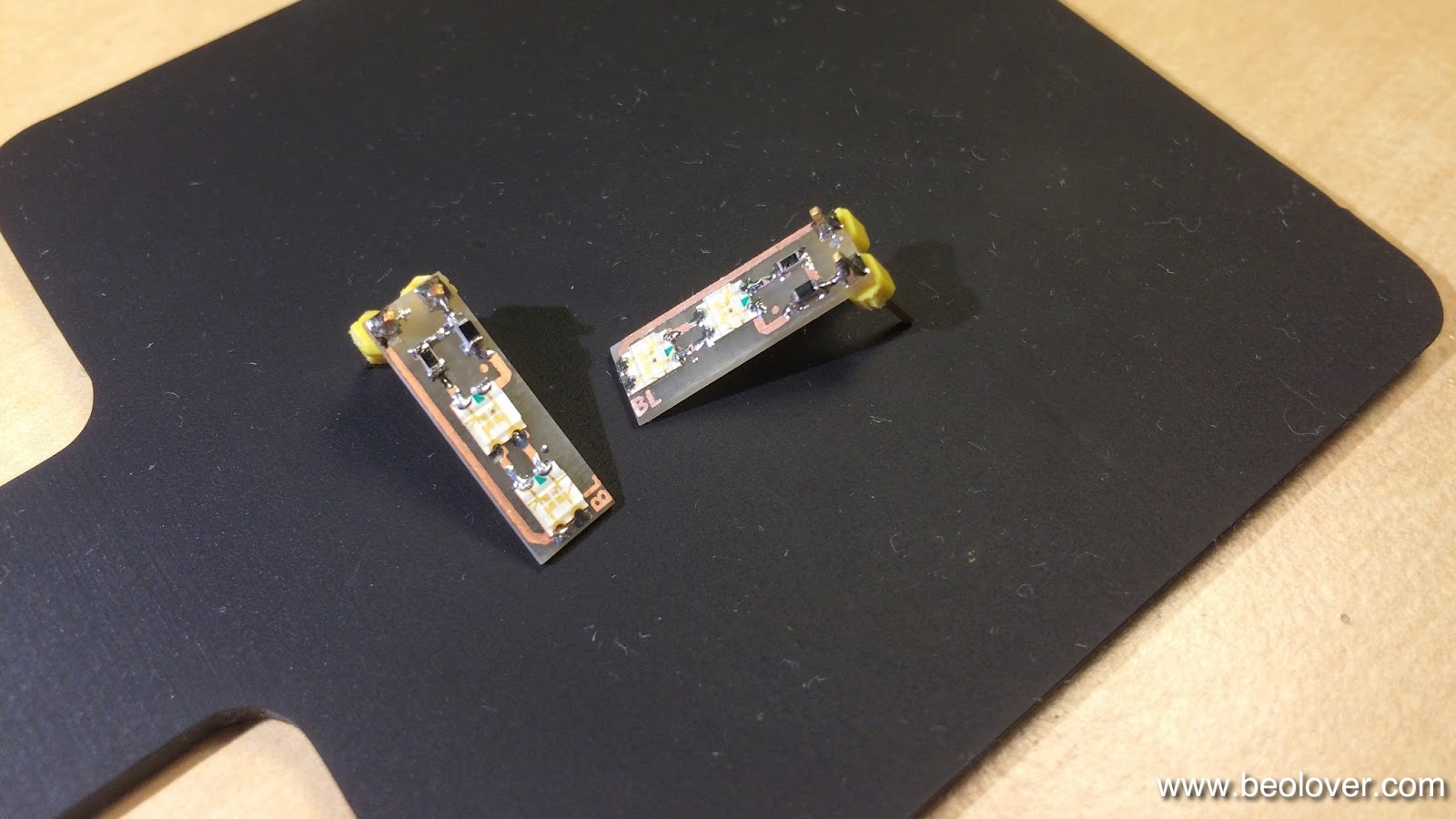 The RPM trimmers were replaced with this (LEDs: Newark 08R2974 with 3.3k resistors - the photo shows 1k resistors, and that was way too bright): 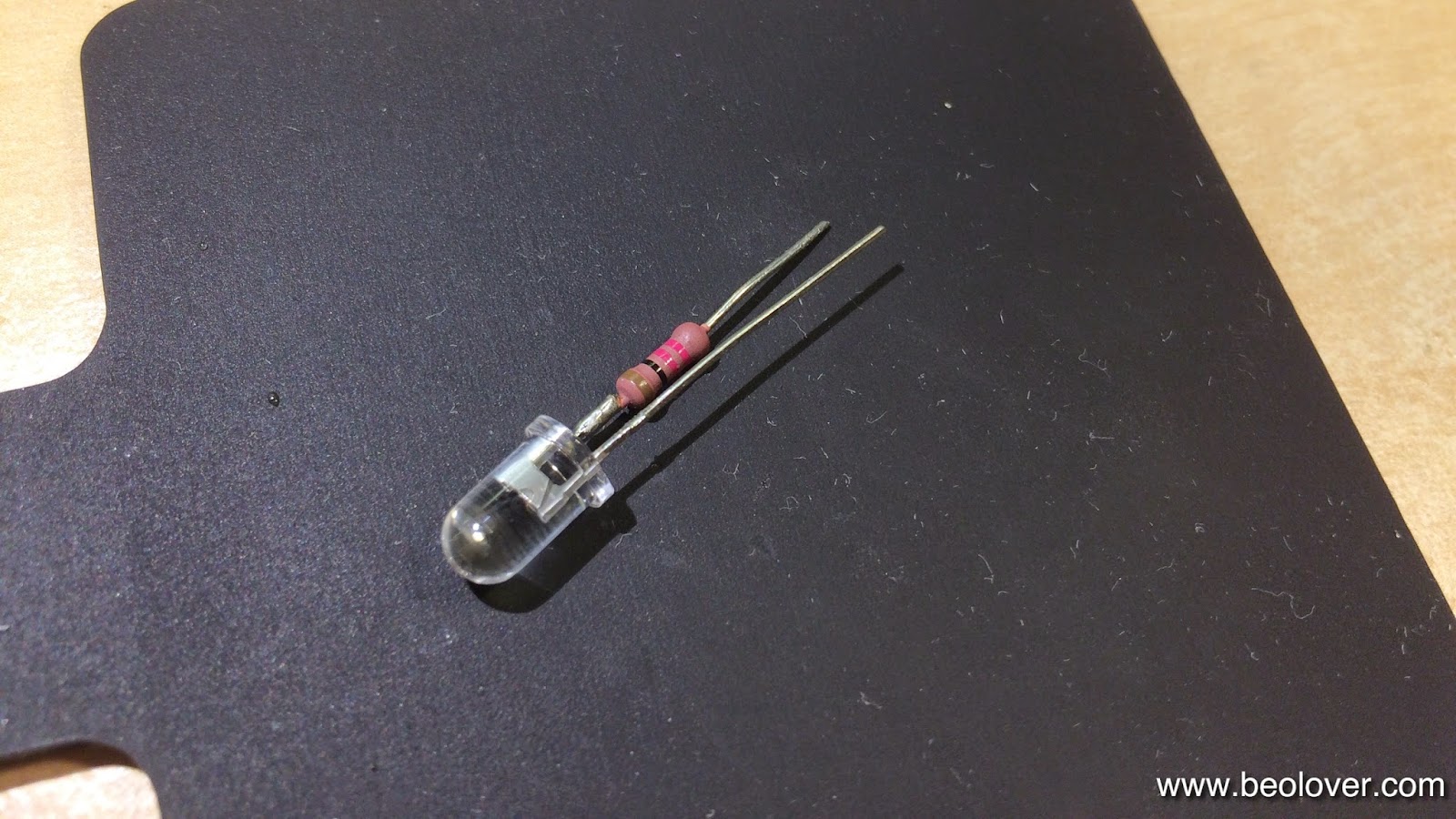 This shows the LED assemblies installed: 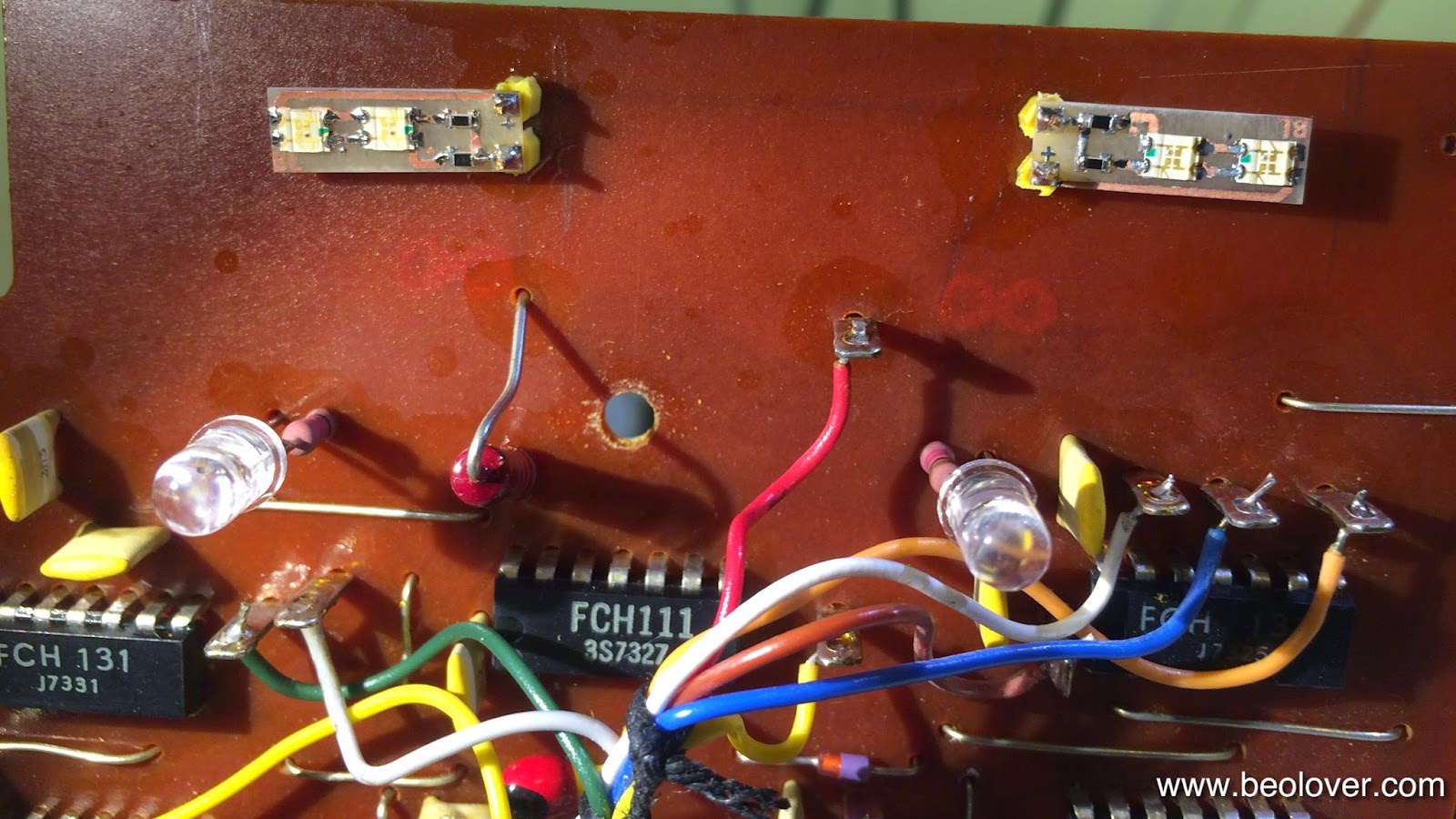 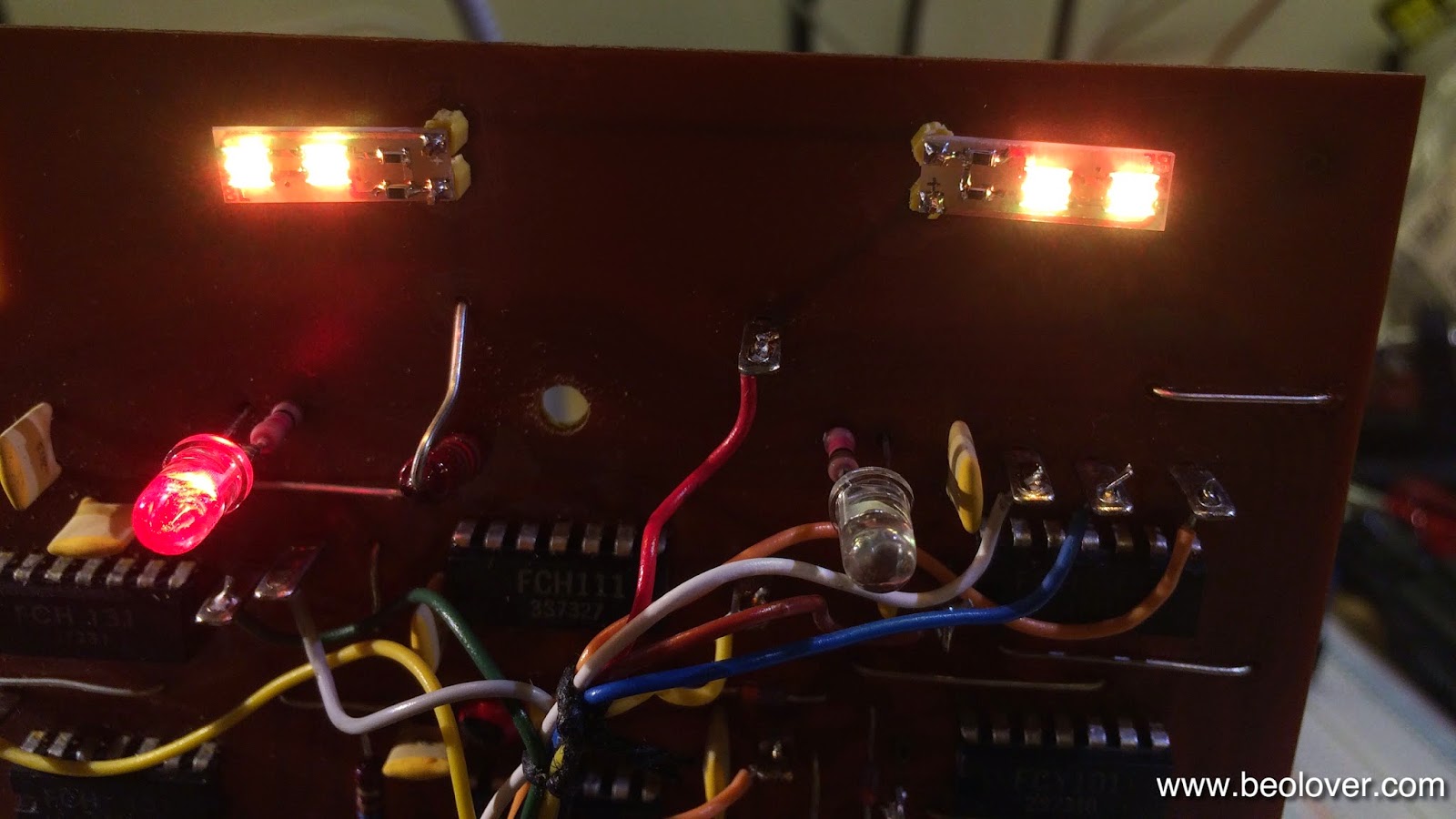 This shows the control panel in operation with the LEDs in place. This looks pretty authentic. We decided to make the RPM trimmers a bit brighter than original to make them visible when the light is on in the room. The original brightness is so low, that one has to practically turn off the lights in the room to be able to see them at all. But this could of course be adjusted by using larger resistors for the LEDs. An identical look to the original very low brightness can also be achieved with low output LEDs (Newark 14N9416) and 220 Ohm resistors: 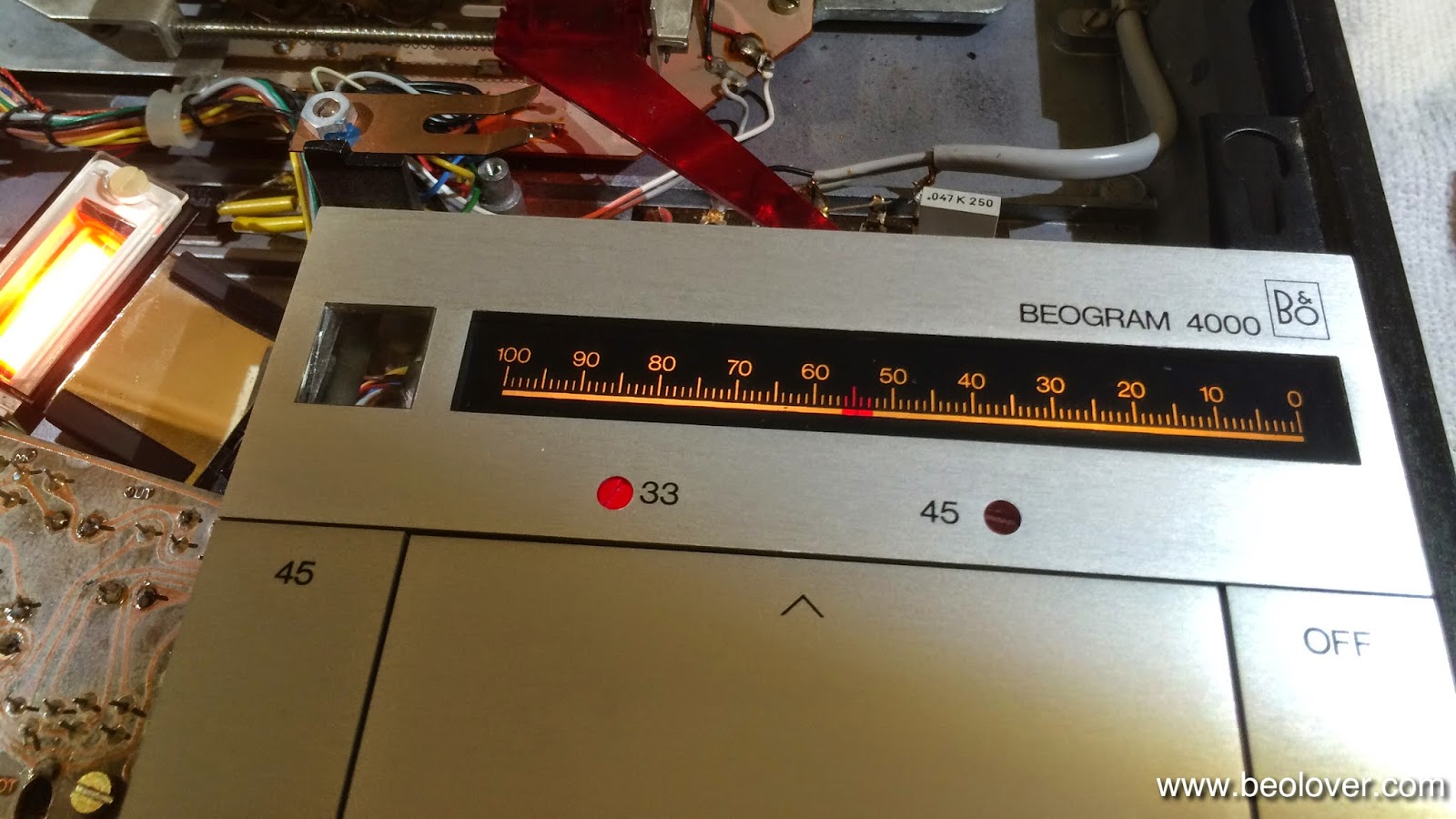