After rebuilding the DC motor and the control system of the Beogram 4002 (5514) that I am restoring right now, it was time to do a RPM performance test. I set up my BeoloverRPM device that allows the long-term logging of the platter RPM, and then did a 24 hrs test: 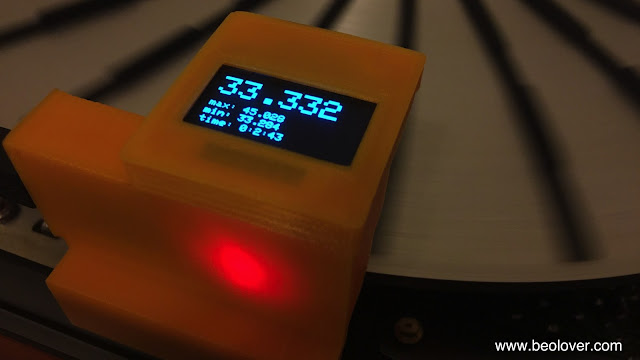 After the data was logged on my computer, I graphed it relative to a measurement that I took when I initially received the unit for restoration. This shows the two curves in comparison: 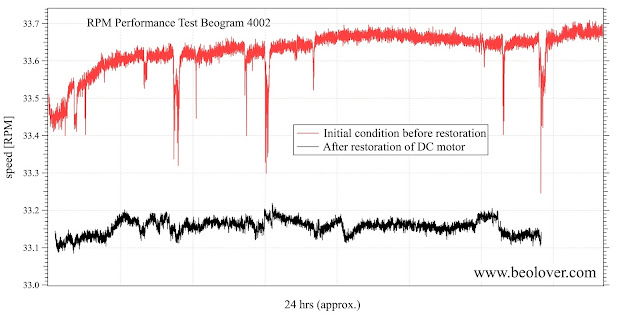 The red curve shows the performance before the restoration. The typical telltale sudden negative RPM spikes are visible that indicate failing brass sleeve bearings in the DC motor. This is very common for DC motor Beograms. In this case the spikes are still fairly moderate, but would have been audible since they are in the 1% range. The black curve shows the performance after rebuilding the motor and the installation of new RPM trimmers and RPM relay. The large spikes are gone and the variations are much smaller. There are still some variations, which are related to the intrinsically slightly erratic performance of the analog motor control system, which is affected by temperature changes and probably the moon phase (that was a joke...;-). Some Beograms show them others do not. At this point I do not have an answer why they sometimes occur. The good news is that they are fairly slow over time and also small enough that one cannot hear them. The short term 'wow and flutter' RPM changes (the high frequency 'noise' on these curves) are within the spec given in the service manual (0.05%).  So this Beogram is back in business.