The Beogram 4000 that I recently finished up also had a cracked hood hinge. Sadly, this is a common failure due to the unfortunate way these hoods were designed in the hinge area. The use of countersunk screws in combination with a fairly heavy weight of the hood puts more stress on the plexiglass material than it can handle and often cracks develop over time. This shows how this hood presented: 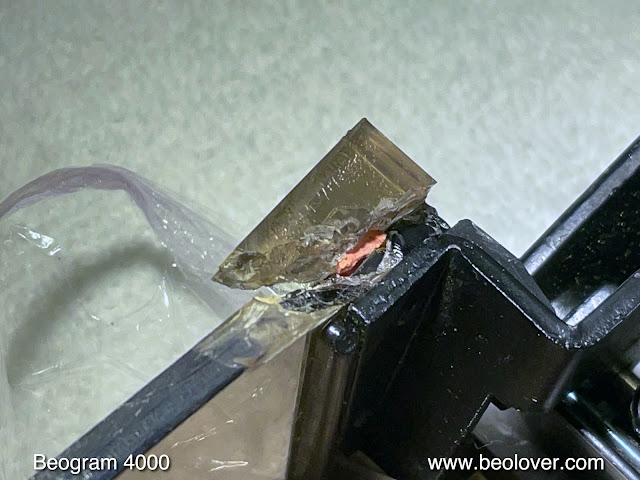 Fortunately, only one piece broke off making a fairly clean fracture and the rest of the hinge was still in place, albeit with an additional crack between the two bolt holes. I carefully cut through the glue that held the aluminum strip in place using a razor blade. This allowed preserving the strip with little damage: 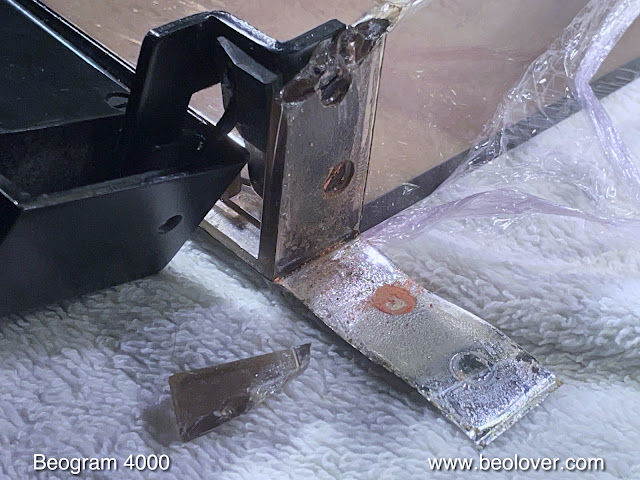 The next step was cleaning off all the old glue on both sides. This usually works well by soaking the area in isopropyl alcohol for an hour. Then the glue can be scraped off. In this case it worked pretty well: 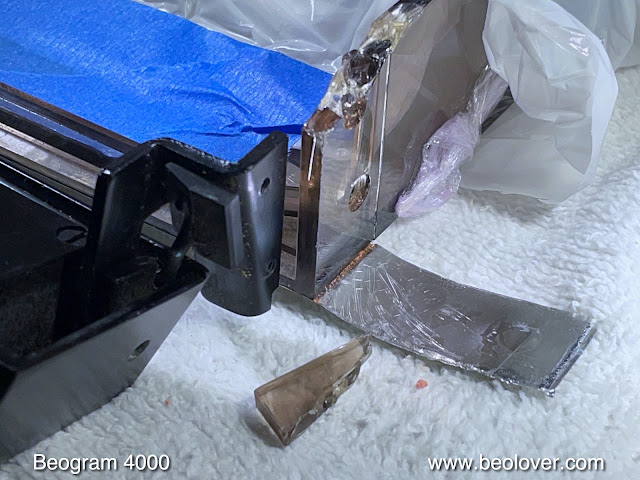 Then I glued the broken off part back into place with plexiglass glue: 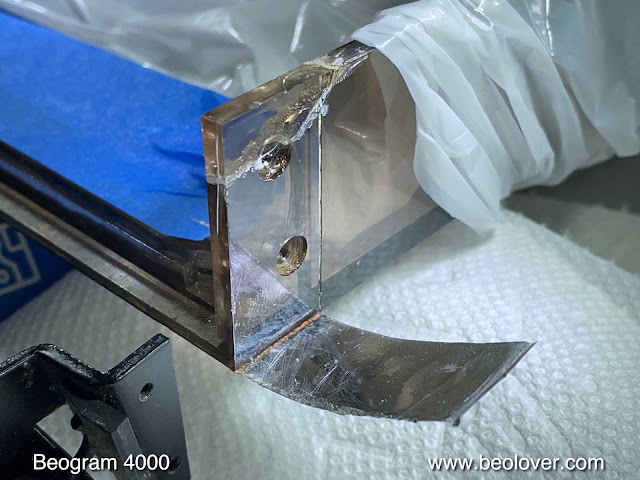 After cleaning up the glue spill out at the crack, I installed Beolover hinge patches. I developed a clamping mechanism that makes use of the two bolt holes to press the patches into the hinge area. The glue usually softens the hinge and the patches can be sunk slightly into the material by tightening the screws tightly: 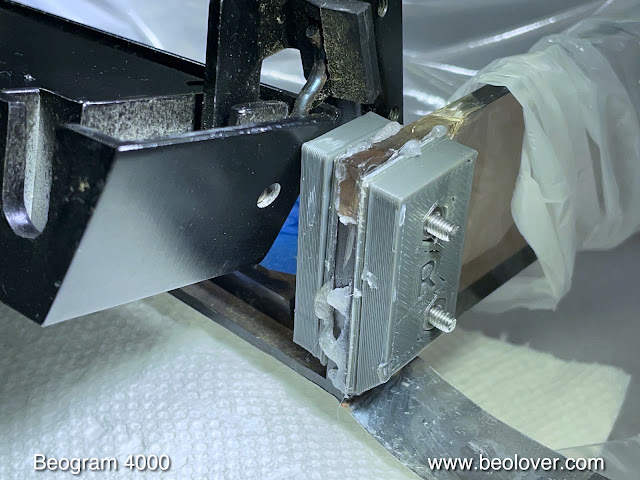 This is how the outer patch looks like after the glue cured for 24 hrs, and after bolting the hinge back into the hood: 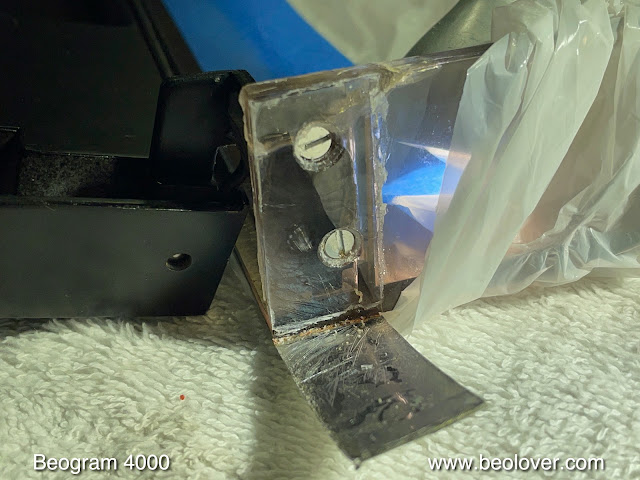 Since the aluminum strip is one of the early 'flimsy' types, the bolt holes need to be 'filled' to make a flush surface with the surrounding plexiglass. Otherwise, the aluminum strip could be damaged if pressure is applied to it from the outside: 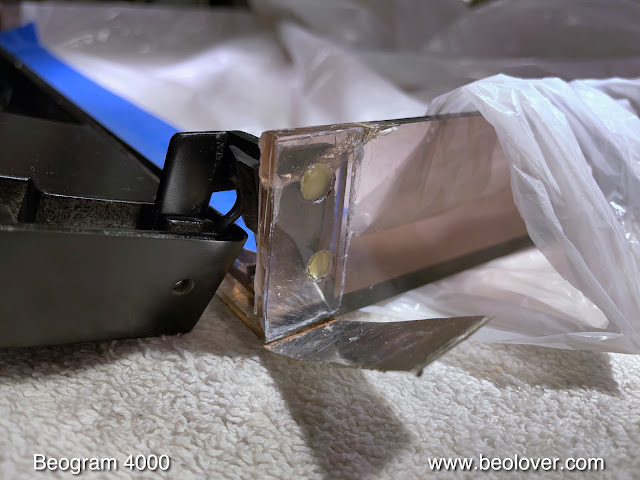 Then I applied contact cement to both sides and pressed the aluminum strip back into place after letting the cement dry. Of course, one can see that the hinge has been repaired since the patches add a little to the thickness of the hinge area, and unfortunately, also some glue squirted out towards the front. This is hard to avoid since one wants to make sure the glue really covers the entire patch, i.e. it has to squirt out a bit to  make sure that this happens. But life is mostly a compromise, and so we need to accept that a repaired hood is not as pristine as a new one: 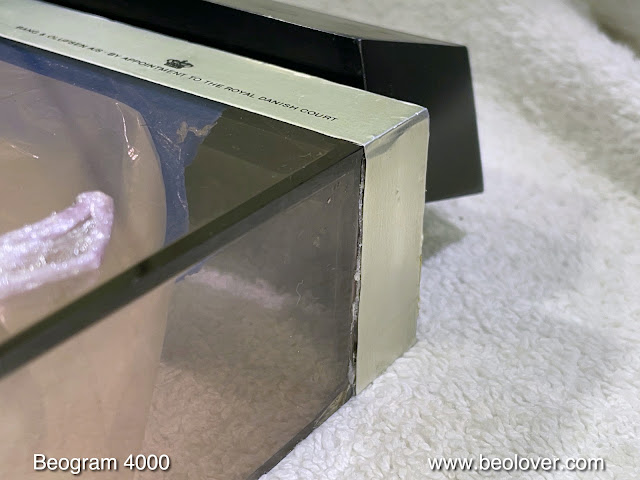 Like pretty much all Beogram 4000 hoods I encountered so far, this one also was missing its rubber bumpers at the front. They usually break off due to degradation of the original rubber material: 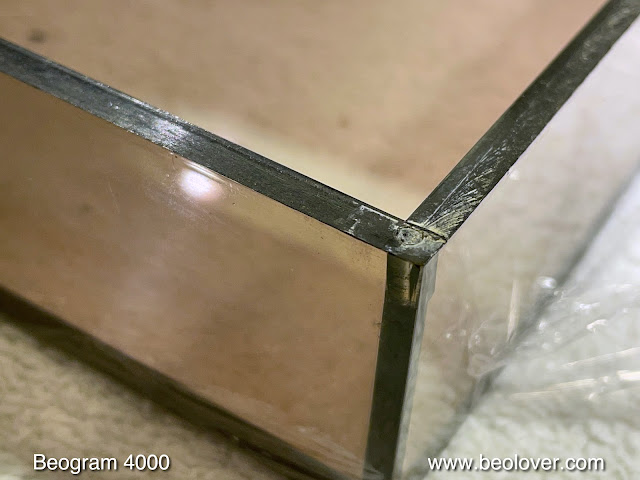 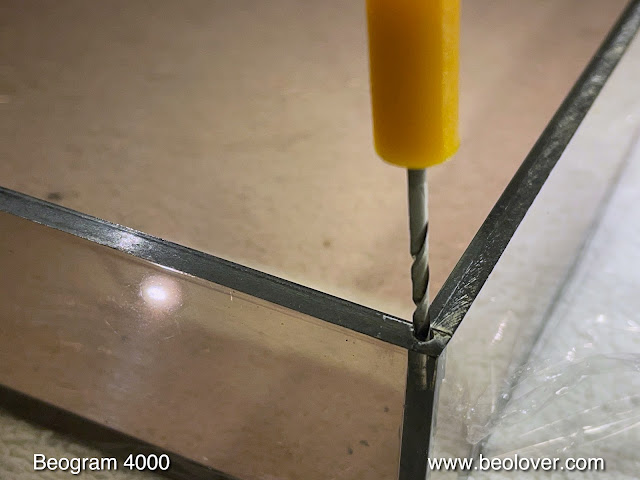 and then install a 2mm O-ring snippet with some superglue gel: 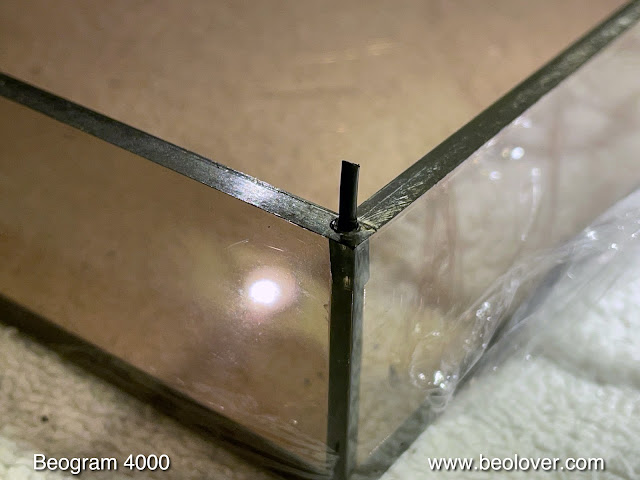 After letting the gel cure, I cut the snippet to a 1 mm length using a template and a razor blade: 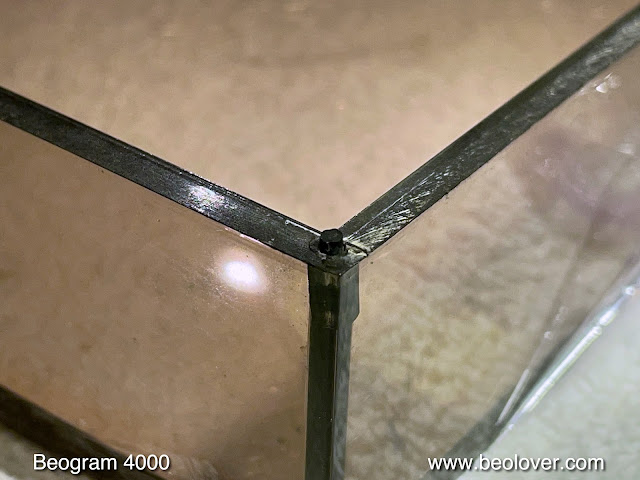 This hood is in business again. I hope it will hold up a while!