Beomaster 8000: The Mystery of Swapped Tape 1 and 2 In- and Outputs and a Broken Damper Arm (Sad Story)

A Beomaster 8000 that I recently restored showed a strange phenomenon when I hooked it up to my Beogram 8000 and Beocord 9000 for in-situ testing: When I pressed start on the Beocord, the Beomaster came on with the Tape 1 input selected as it should due to the Beolink connection between the two. However, there was no sound from the tape (and no recording either as I found out shortly after). However, I was able to hear the playback signal very faintly when I cranked the Beomaster up to full volume. This indicated that there was something fundamentally wrong with the Tape inputs. The plot thickened when I hooked my iPad up to the Tape 1 input and only got sound out of the receiver when selecting Tape 2. Then I connected it to the Tape 2 input, and, you guessed it, I needed to select Tape 1 to be able to listen to it.
It appeared that the inputs were swapped...very strange!

The Beomaster went back to the bench, and I opened it up. Then I traced the signals to plug P3 on PCB3 (preamp). And indeed both in- and output leads were swapped on this plug, effectively connecting Tape 1 to the Tape 2 connections on ICs 202/102, while Tape 2 was connected to IC4.

I removed the terminals from the plug housing and replaced them in the correct order. I made a schematic for future reference: 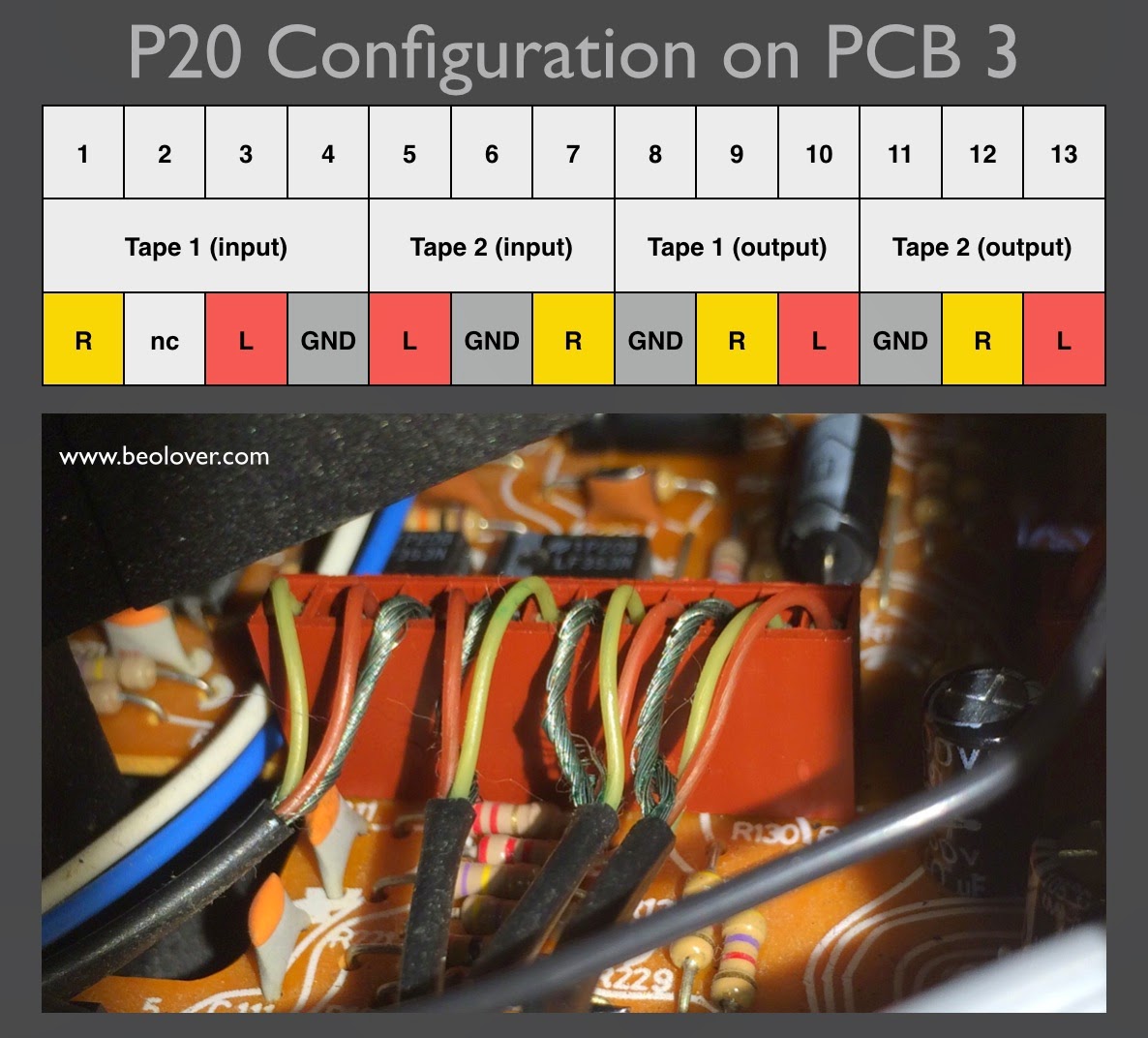 After this I thought everything was fine, and I tested the inputs. And indeed, now I plugged in the source to Tape 1, and it played when selecting Tape 1 as input. The same for Tape 2. Great! (I thought!). But then I played with the 'input level presets' (potentiometers accessible from the outside of the Beomaster that allow to attenuate the inputs if a signal source is too strong). This yielded another surprise: Now the Tape 2 presets affected the Tape 1 input, and the Tape 1 presets affected the Tape 2 input...very strange! But of course much better than the original situation where I was not able to use my Beocord properly. Still strange!

After scratching my head a bit, I remembered that some Beomasters come with a different connector box, where the tape RCA connectors are connected to the Tape 1 input instead of Tape 2. At that point it dawned on me what probably happened to this Beomaster 8000 of unknown ebay provenance:

The previous owner swapped the original input box that had the RCAs on Tape 1 with an input box  from an other Beomaster that has the RCAs on Tape 2, and it seems that these two configurations have Tape 1 and Tape 2 swapped on P3 that connects to the circuit board.

Here is a pic that compares the two boxes and shows their P3 terminal arrangement: 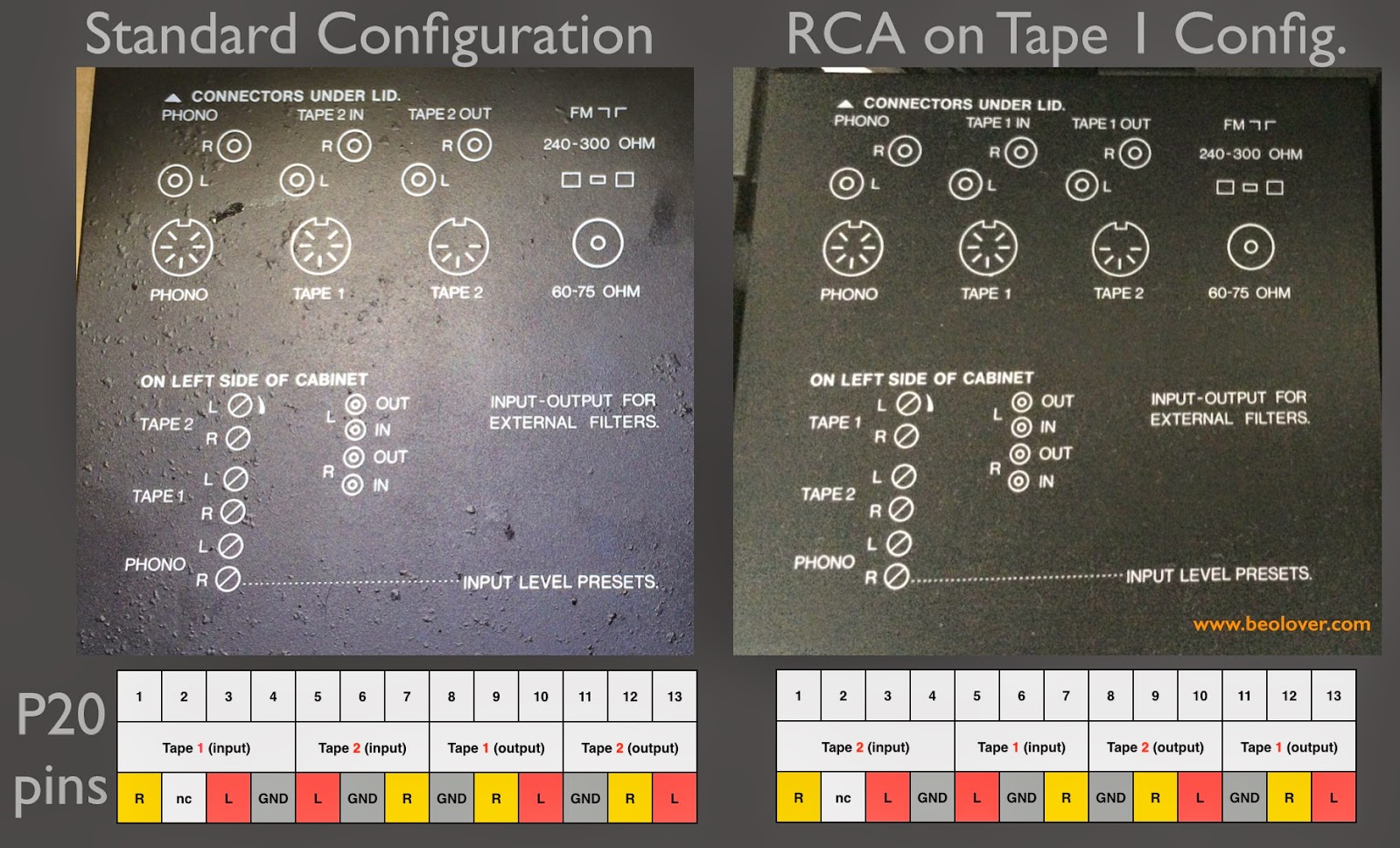 Note the different arrangement of the Tape in and out RCAs on top and the input level presets labeled below. Tape 1 and 2 are swapped. At this point it escapes me why B&O would have changed the P3 pinout...there is really no reason, they could just have connected the RCAs to Tape 1, relabeled the box and been done with it.

It is interesting to note that all Beomaster 8000 circuit diagrams that I so far have seen show the "standard configuration", but there is a significant percentage of Beomasters that have the "RCA on Tape 1 configuration"...

Anyway, this Beomaster is working now as it should (as long as one remembers which input level presets to use) and my Beocord works happily with it.

Some bad news: While putting the left side of the Beomaster back together after rearranging the inputs, a 'petit malheur' happened: When I bolted the control panel lid back onto place, and closed it a loud crack occurred, and then the lid was undamped. first I thought the linkage broke, as it has before, but no, a more spectacular problem arose:

This picture shows the arm fragment still attached to the linkage with the broken off part: 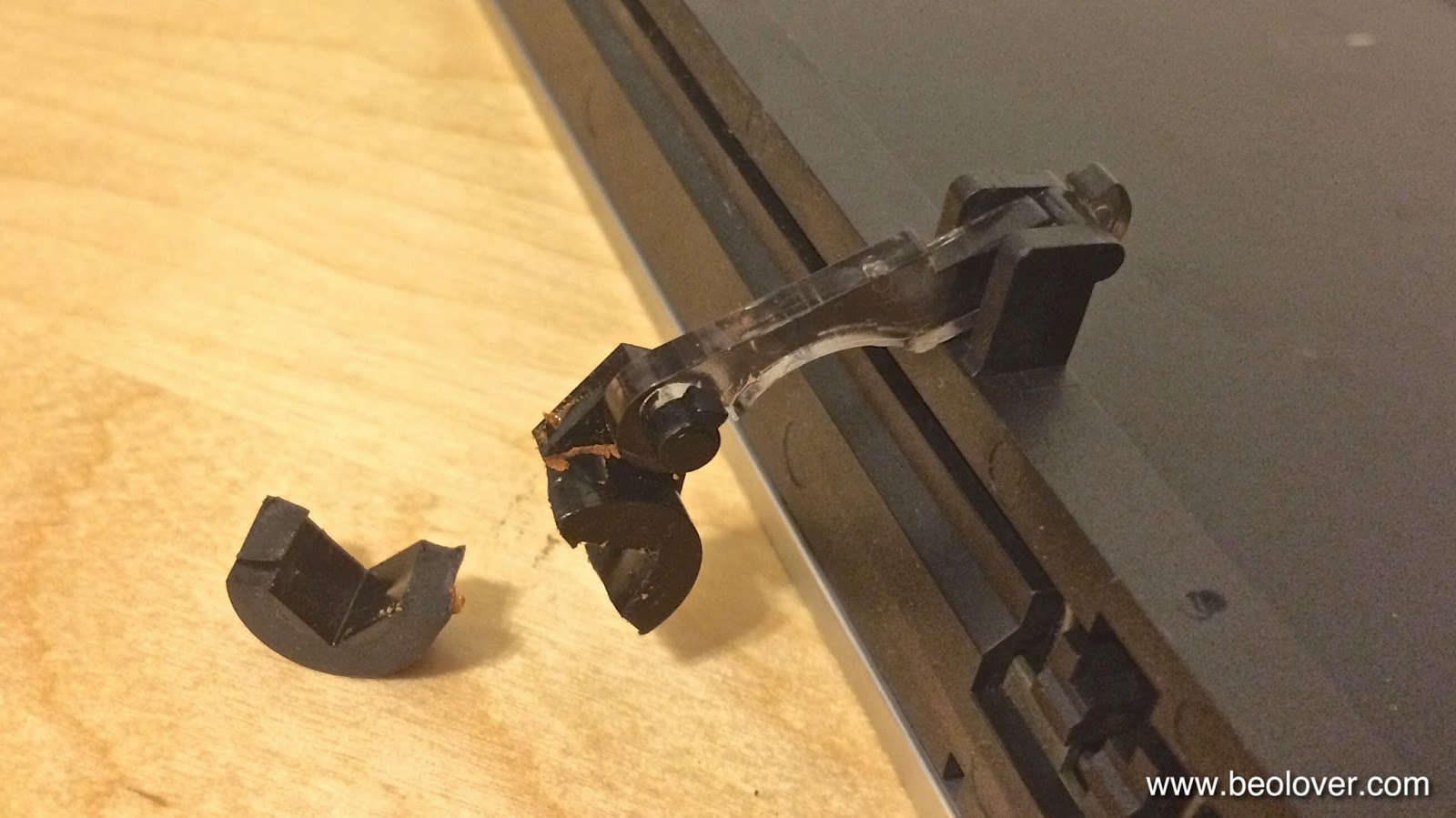 Here is a shot of the two cracked parts assembled with the damper: 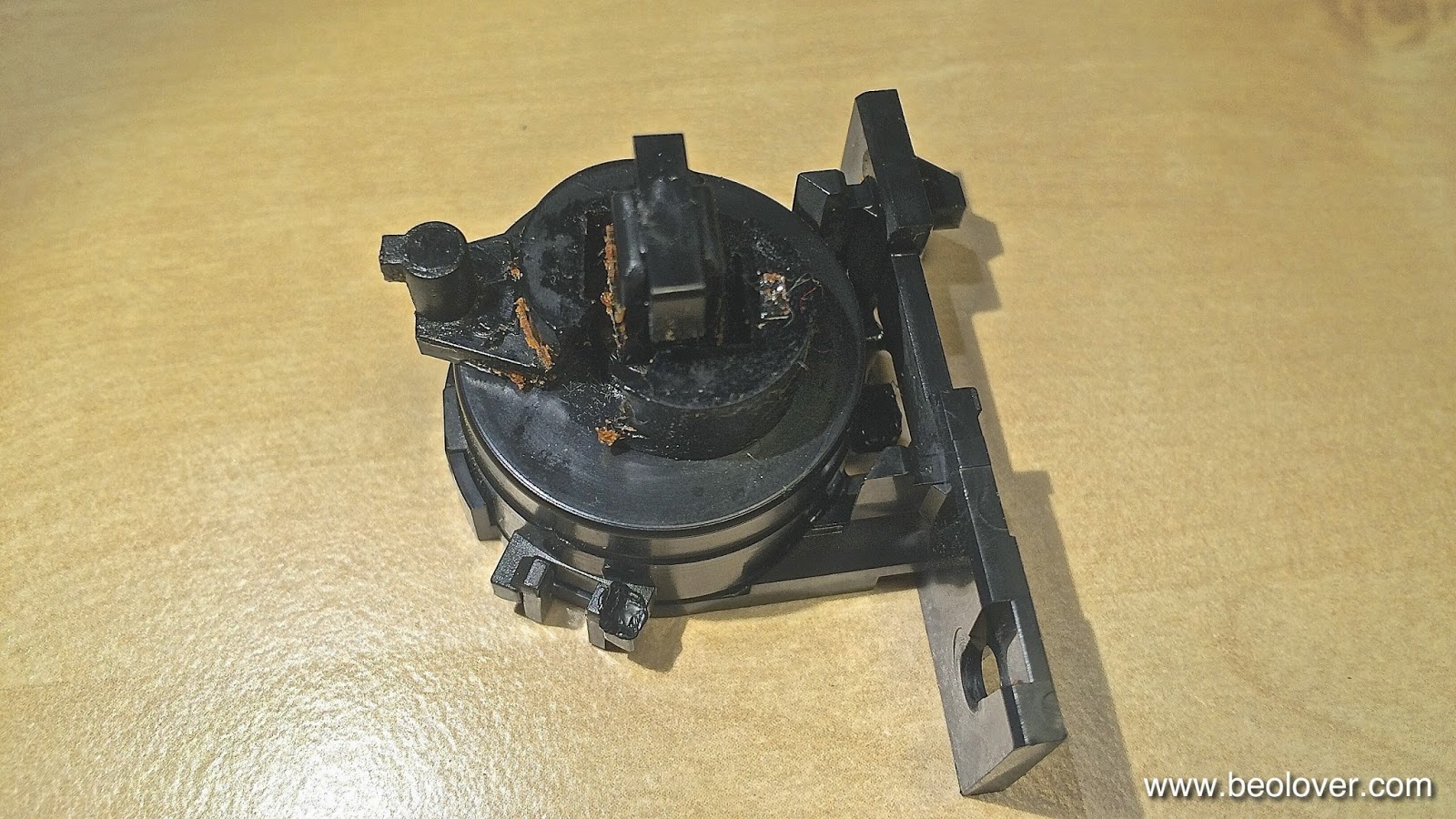 And the broken arm separately: 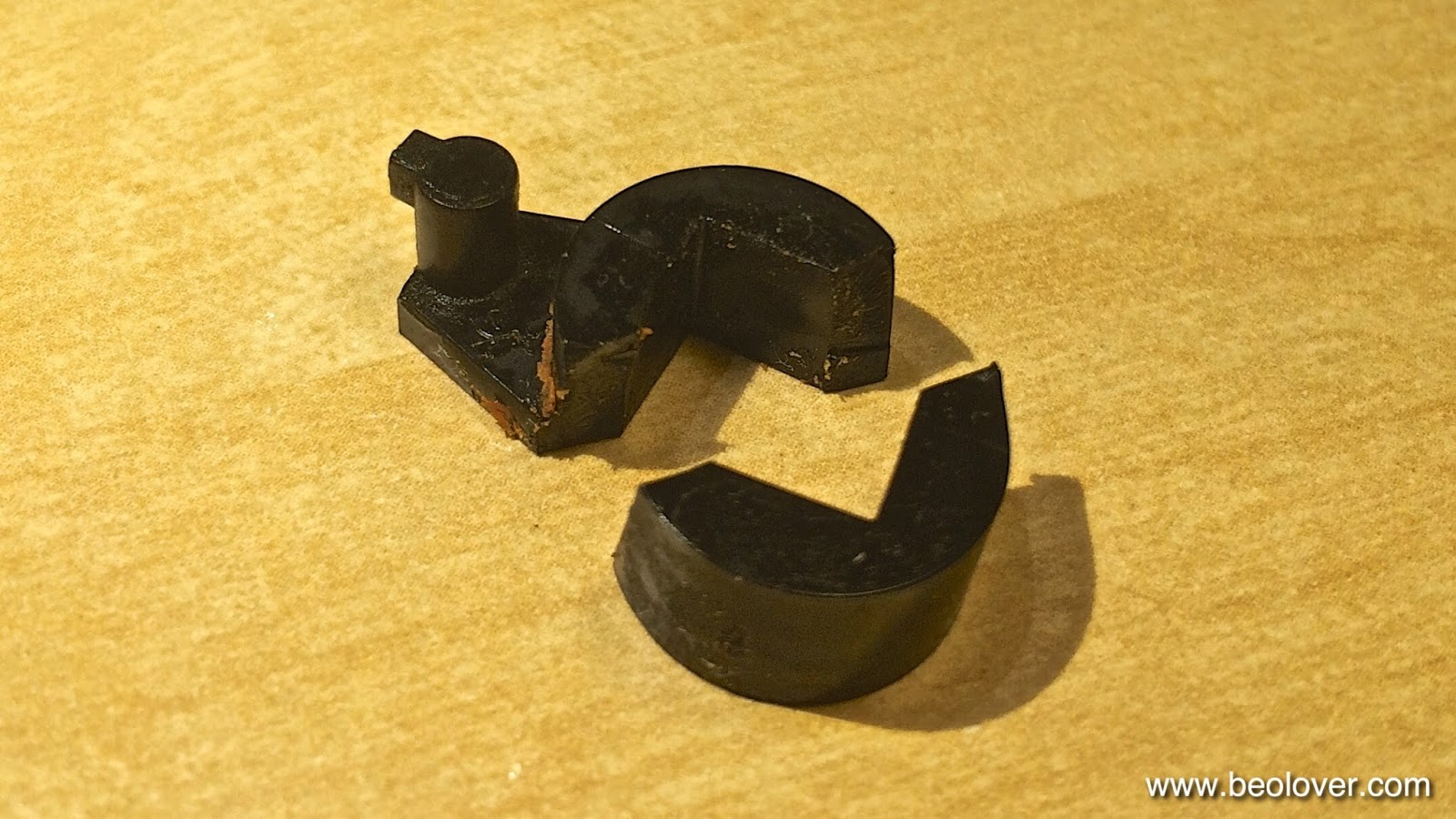 I guess it is time to fire up a 3D printer...;-). Small parts like these are an interesting printing challenge to get the proper fit and stability. Stuff for another blog entry.