A happy day in Beolover's life!! A Beogram 4000 (5215) arrived for some TLC! I always wanted one, but of course here in the US they are hard to come by. The next best thing to owning is to work on one! I was always fascinated by their diode-transistor-logic (DTL) control system built from some early NAND/NOR gates and diode arrays. I took it out of the box and set it up for a test drive. I was told that it is 'mechanically rebuilt' and that it mostly works. I removed the aluminum panels and here is how it looks like (yes, I know...the cabinet is painted over black!...I hope whoever did this will roast a long time in vintage-hifi purgatory for this...;-): 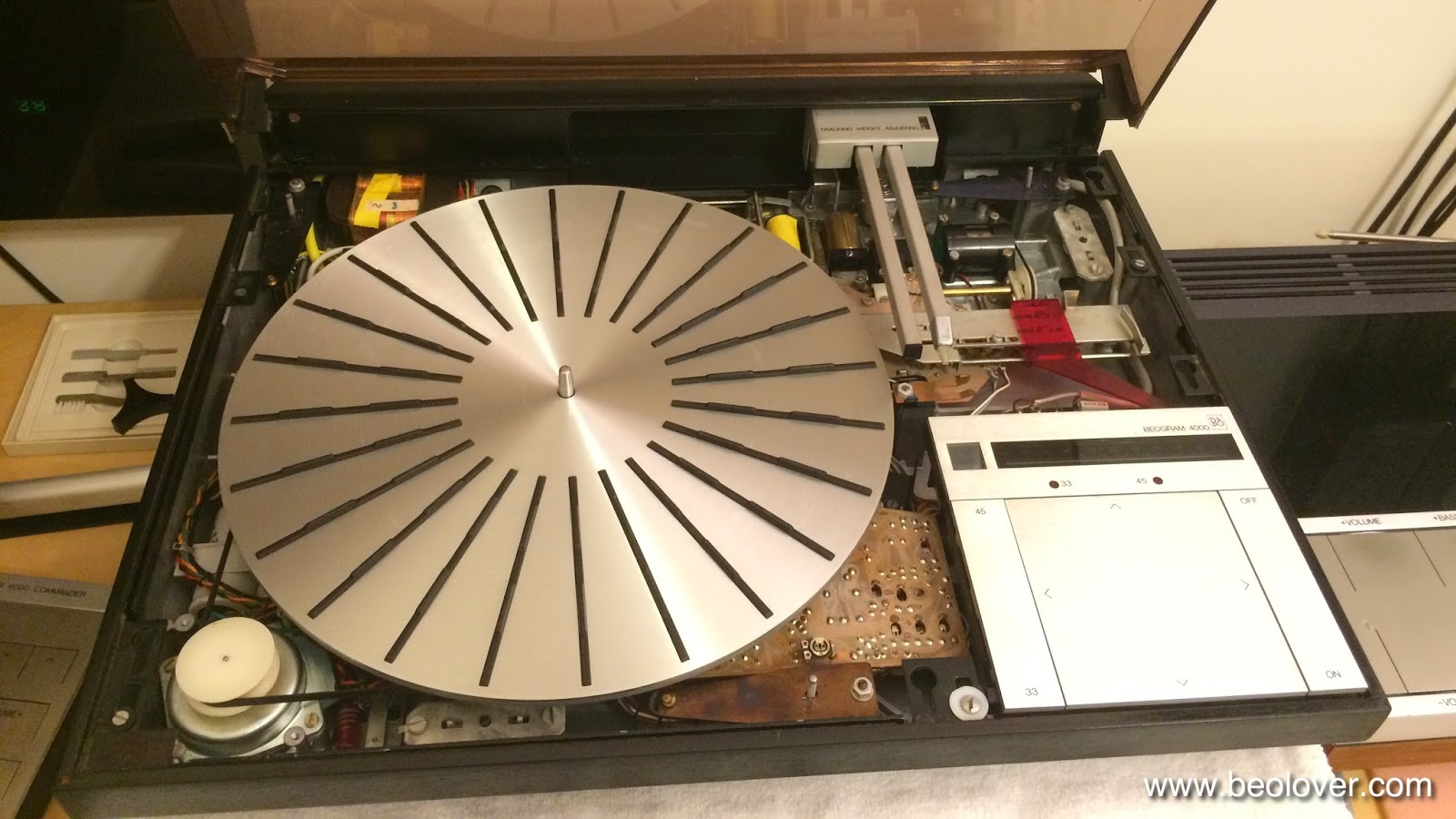 I really like the square keypad made from brushed aluminum instead of the fragile paint coated keys of the later models. Aside from the black cabinet, the hood also has some issues and needs to get polished: 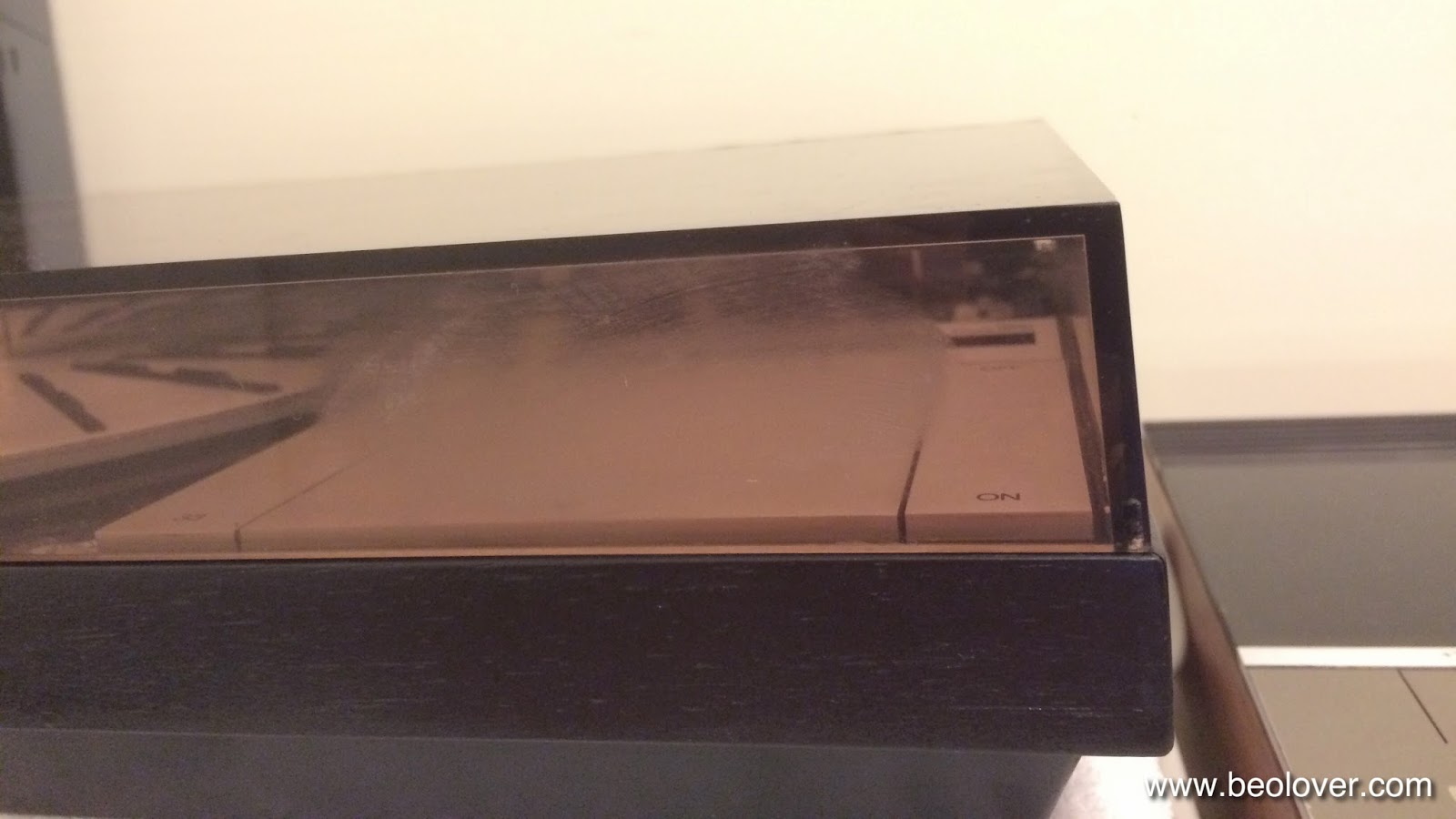 Almost looks like someone used some solvents on the front and accidentally dissolved the surface layer of the plexiglass...nothing that could not be cured with MicroMesh and some elbow grease...

Other interesting features of the 4000 are the very cool strobe light with integrated mirror that allows to check on the strobe pattern that is on the bottom side of the platter: 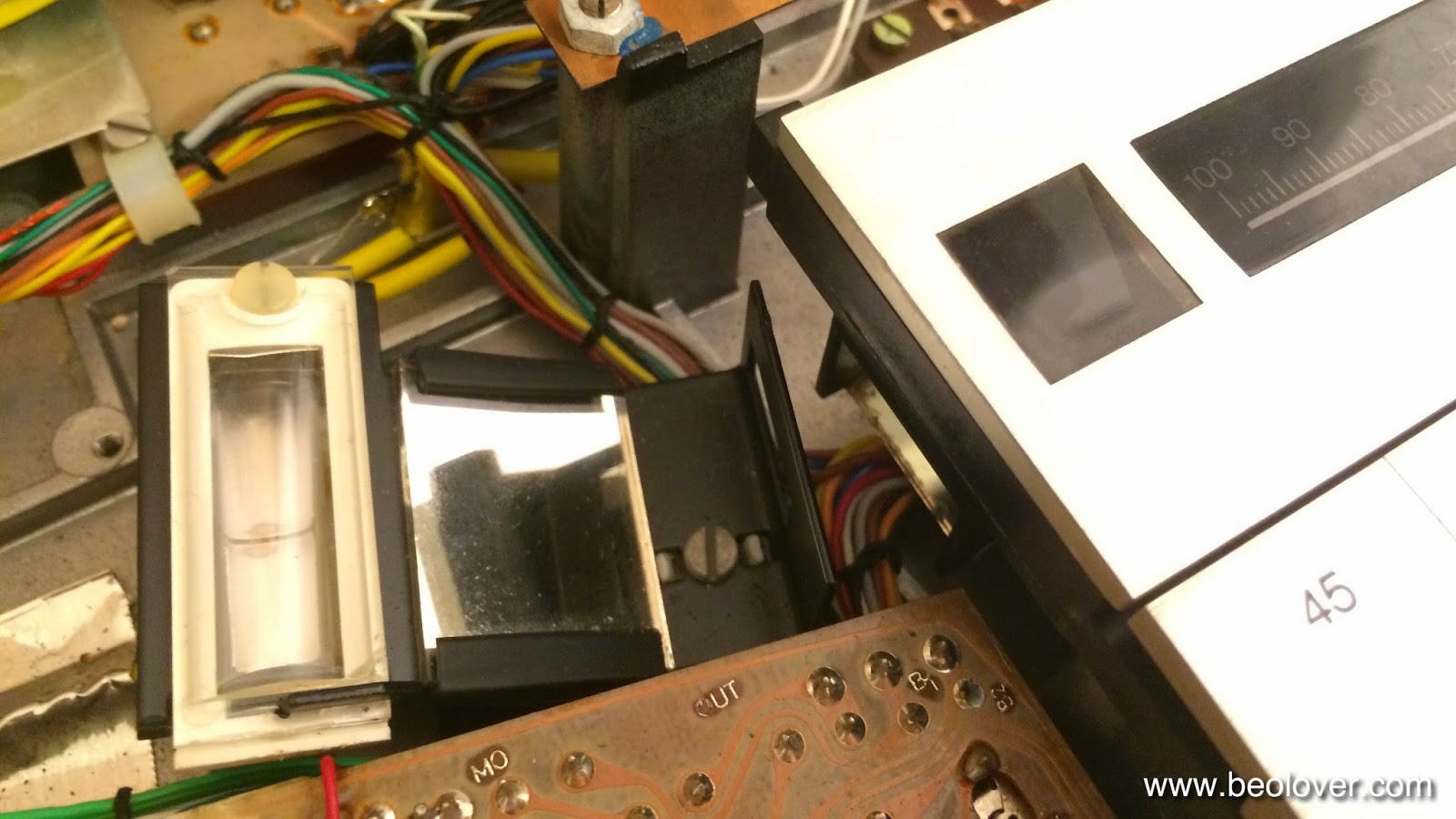 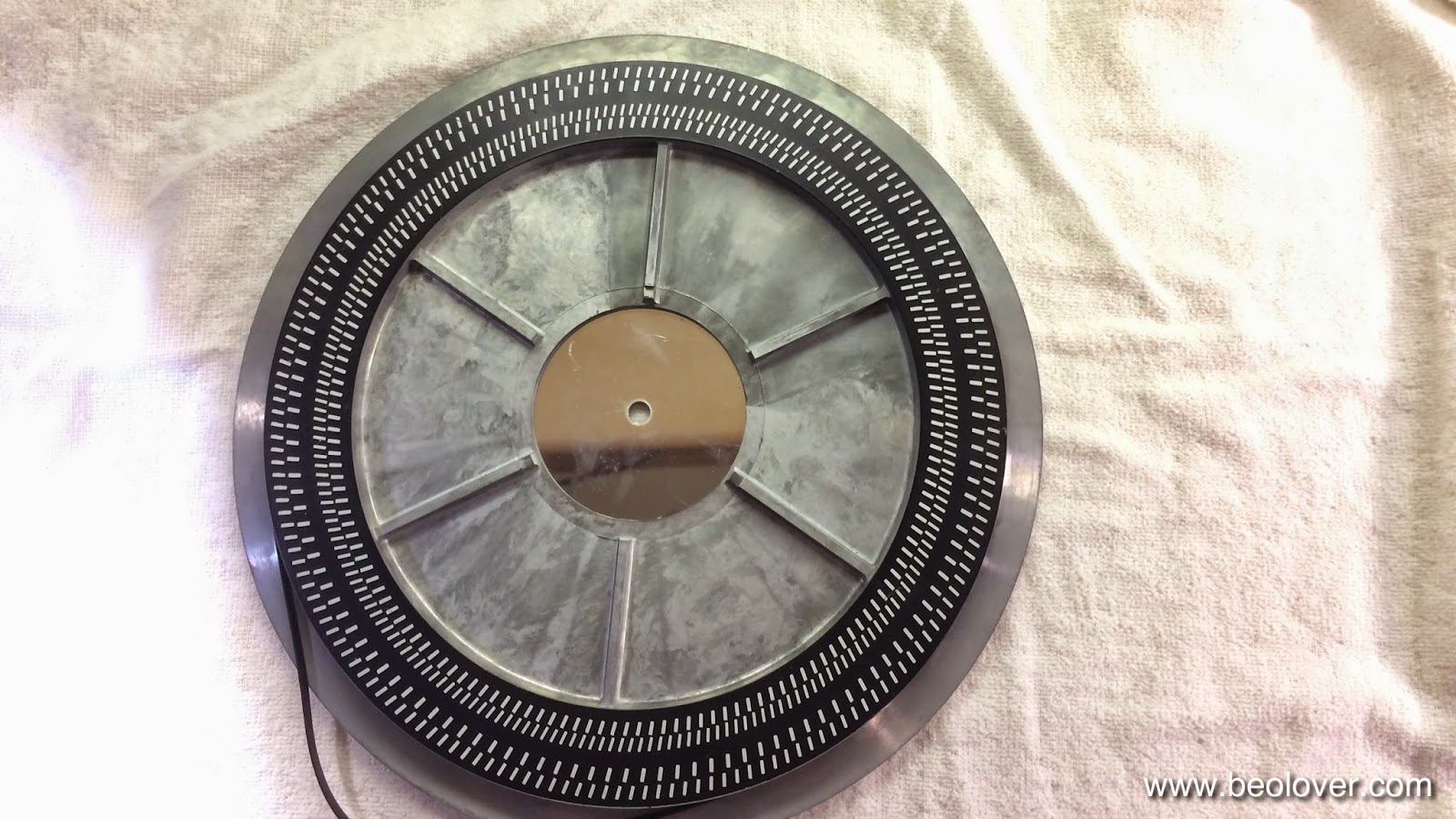 The strobe set-up can be shifted to either bring the 50 or 60 Hz patterns into the field of vision through the square window in the panel to the right. A great vintage feature!

Also intriguing is the 'position indicator' that assigns a numerical value to the position of the stylus on the record: 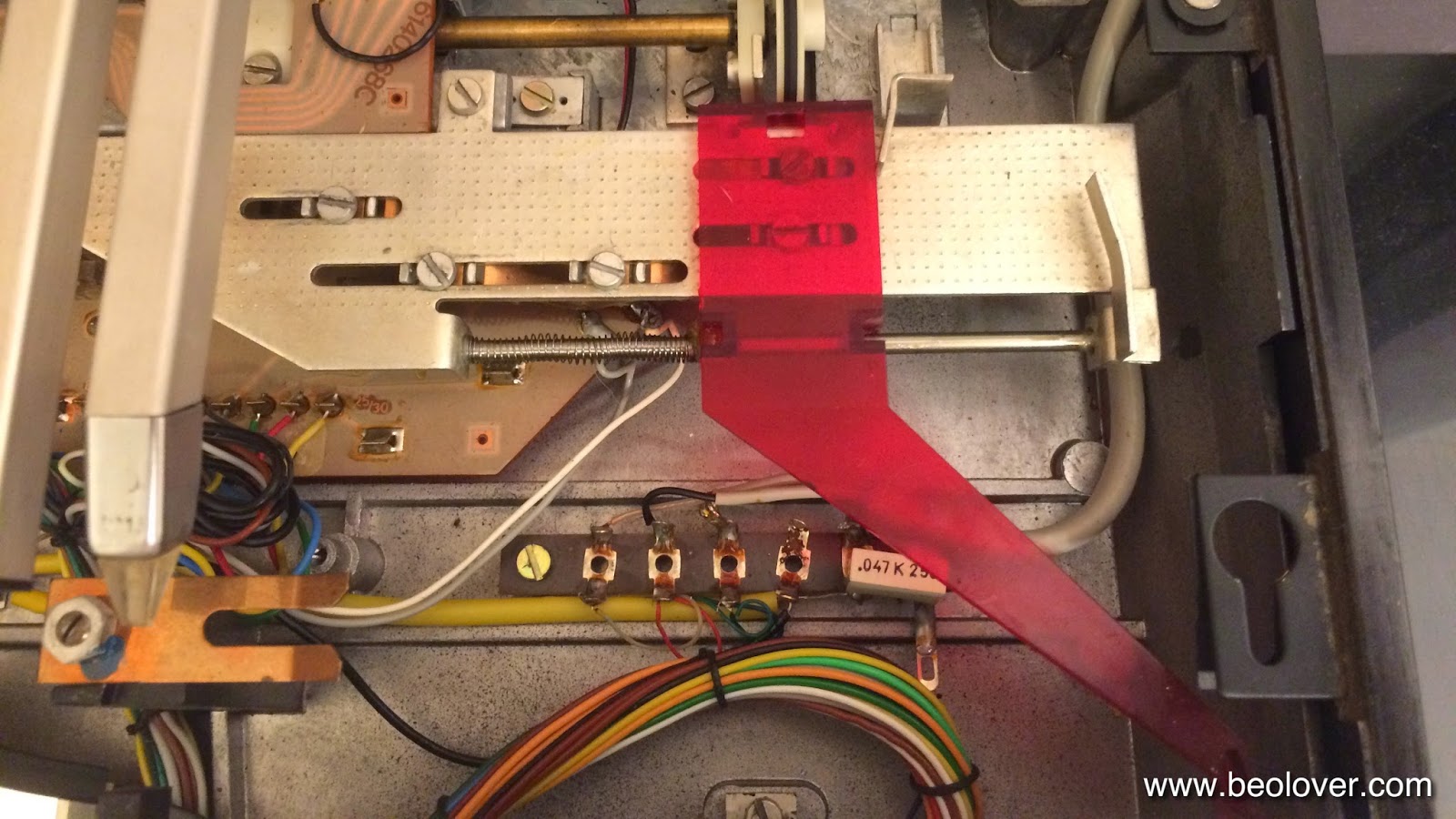 The red plastic part is pushed along with the carriage. The lower end serves as a scale indicator on a backlit scale (the light bulb seems to be out in this unit) above the keypad. A nice pre-digital way to find a certain location in a recording...those were the days!

Another interesting detail is the potentiometer that allows the control of the intensity of the tracking sensor light bulb. This allows the adjustment of the gain of the mechanism: 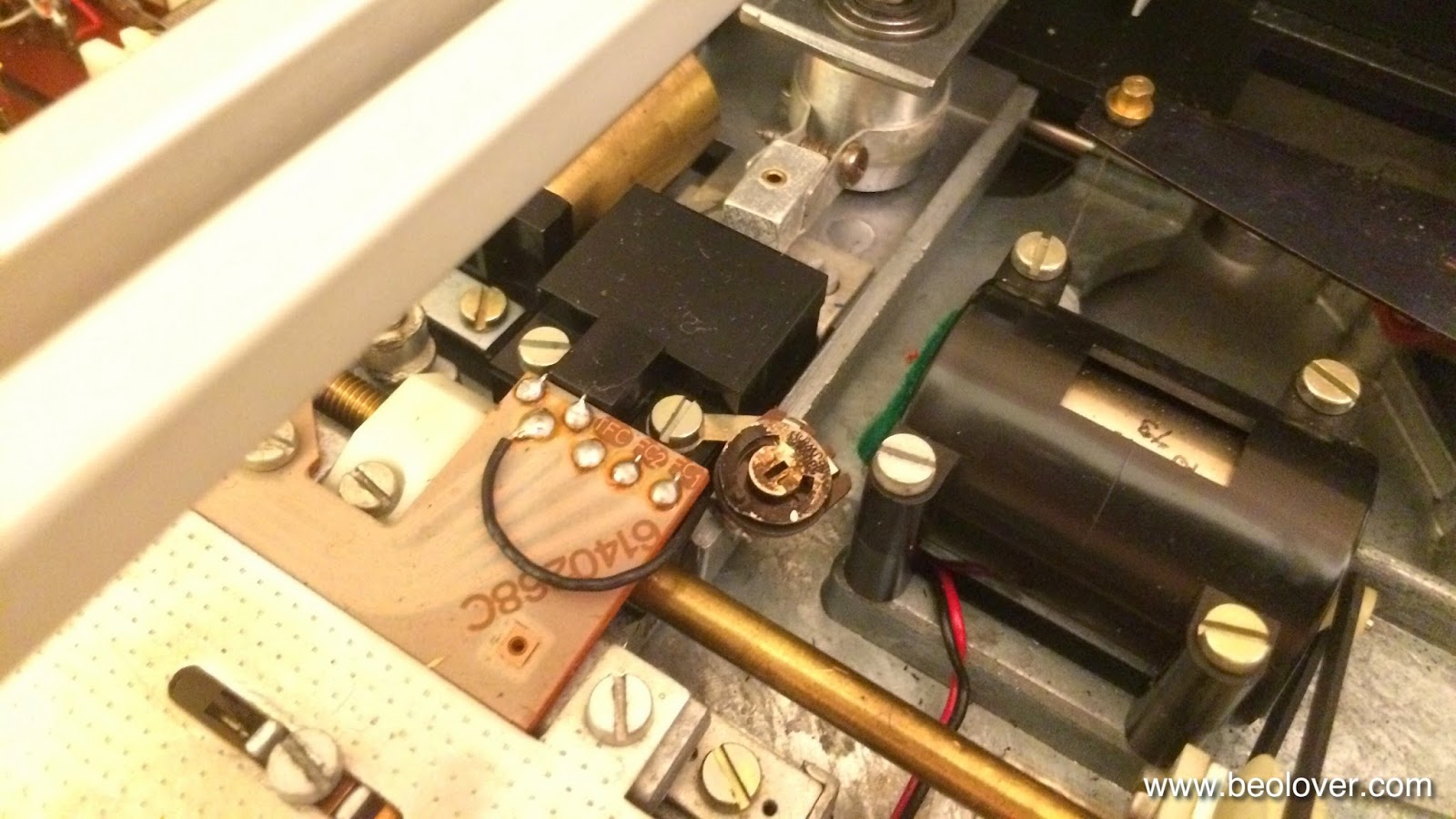 And here is a shot of the power supply PCB, where reed relays (yellow) are used to switch the power rails: 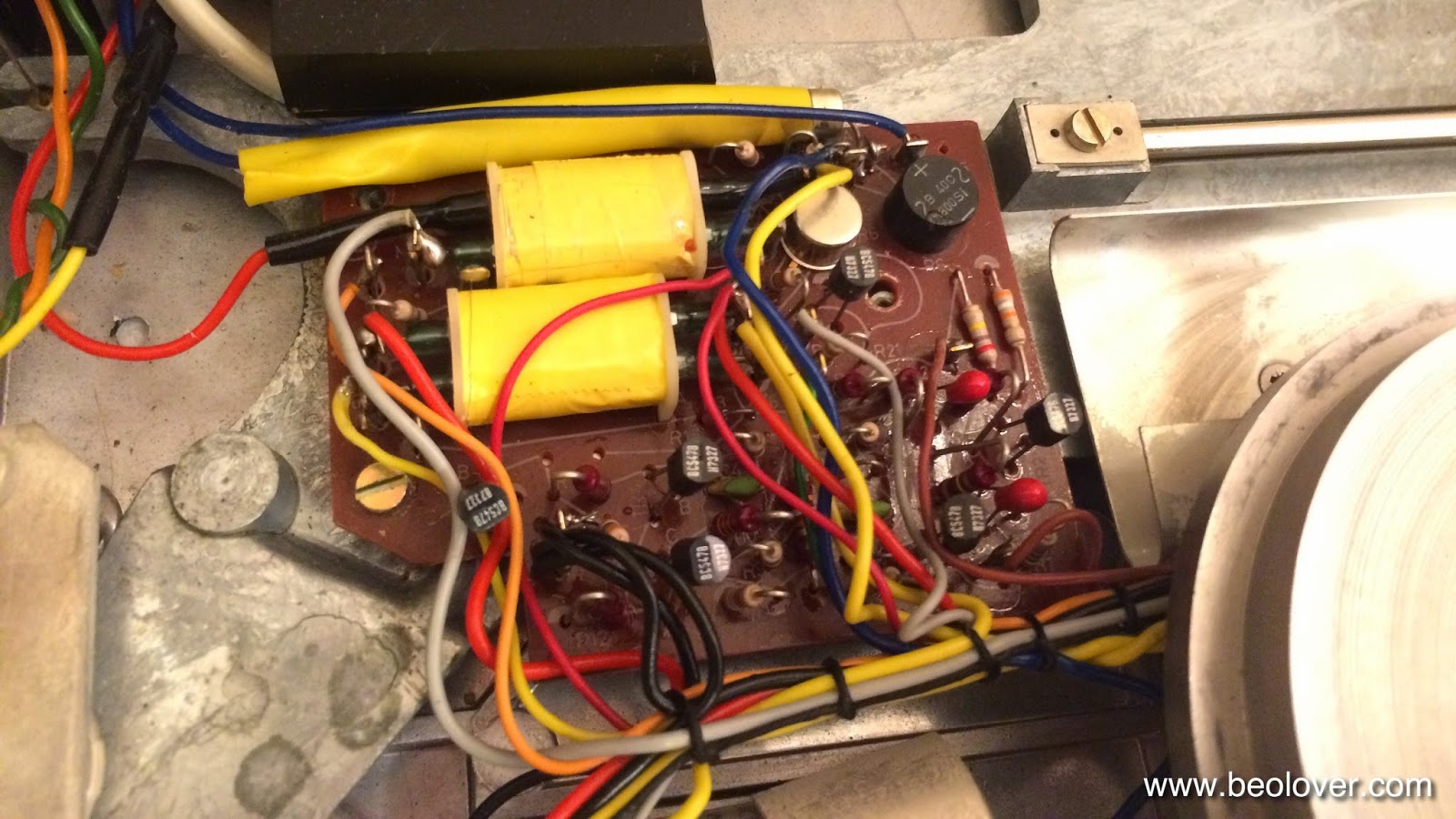 After admiring this awesome design, I switched it to 110V and plugged it in. I pressed 'ON' and the carriage advanced. Not finding a record it went all the way across the platter as it should and then, well, it got stuck at the end...Only pressing "OFF" returned it to the home position...My guess is that the end switch (ES) may be corroded...After that I put on a record and played it. Everything went well, and the return mechanism at the end of the record worked, too. However, I noticed some high pitched interference in the speakers while it played...not sure yet what may cause this. We will see...it is still early in the 'process'.
For now I am enjoying the circuit diagram a bit...Luckily, the data sheets for the DTL ICs are readily available from the usual sources. Great bedtime reading! This is Beolove!...;-)