I recently bought 'The Ultimate Analogue Test LP' from Analogue Productions. I felt I needed to be able to characterize the output of my cartridges and I read about this LP. It is a heavy duty 180g high-quality vinyl that has all the relevant test tracks for basic measurements.

I connected the oscilloscope to the DIN5 connector via a DIN-to-RCA breakout and two RCA-BNC adapters. This allowed me to form a shielded signal path from the output of the Beogram 4004 to the oscilloscope. However, the measurement was still pretty noisy, so I resorted to using a low pass coupling for the trigger and averaging. This gave me usable traces. Here is a shot of the oscilloscope screen on the 1 kHz test track: 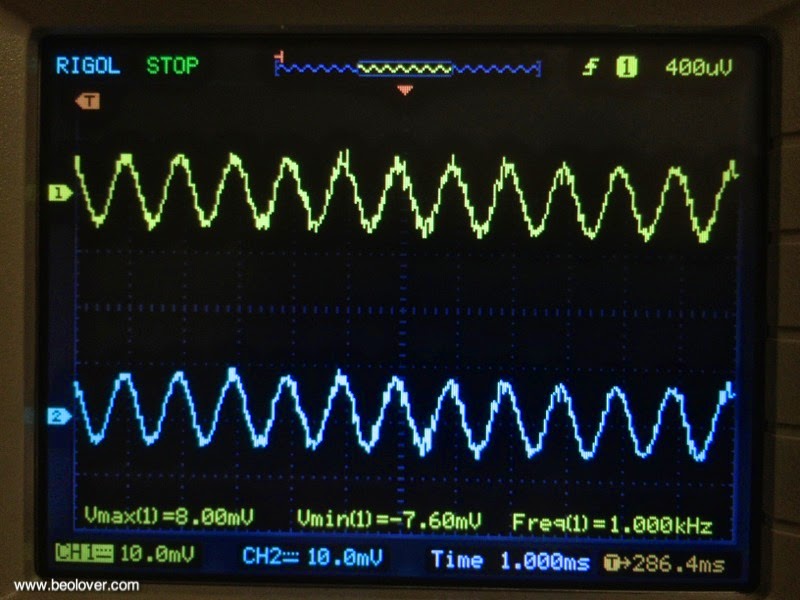 It is obvious that the MMC20EN cartridge that came with my Beogram 4002 puts out a well balanced signal on both channels. The peak to peak amplitude of the 1 kHz signal is about 15 mV. This also seems to be a pretty good way to calibrate the RPM of the platter... 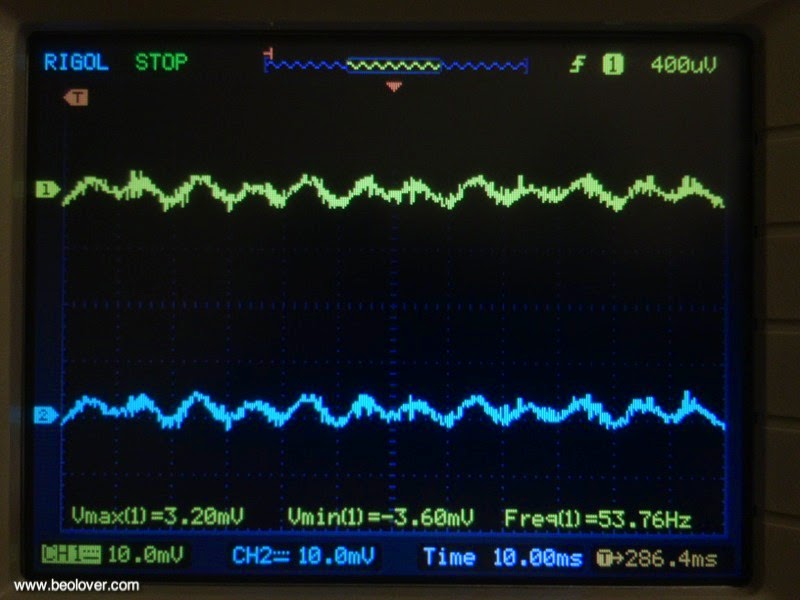 As expected the amplitude is considerably lower (maybe 4 mV without the noise) than for the 1 kHz signal due to the RIAA pre-emphasis. This is necessary at low frequencies to keep the groove width reasonable (Faraday's law prescribes that the induced EMF is proportional to the change of the magnetic field, which in turn is proportional to the velocity of the moving magnet, iron or coil in a cartridge). I found an excellent summary that explains the background behind the RIAA curve and the historic path towards it. The article is by Gary A. Galo and can be found here.

In short, the RIAA curve lowers the amplitude progressively towards lower frequencies to reduce the groove width (otherwise long playing records would not be possible). At high frequencies the amplitude is increased to stay ahead of the noise, which, due to its high frequency content is an effective EMF generator. Hence the signal amplitude needs to be a few magnitudes larger than the noise amplitude, that in the amplifier signal + noise can be reduced together, thereby reducing the noise relative to the original signal level. This is a similar approach as is used in Dolby noise reduction systems.

The 10 kHz track on the Analogue Productions LP produces a standardized -20 dB amplitude (i.e. 10x smaller than the other two tracks, which are at 0 dB. 0 dB apparently corresponds to a 7 cm/s stylus velocity, as suggested on the LP sleeve. Here is the (pretty noisy, disregard the Freq measurement indicator) measurement (timebase is 100 us/sq): 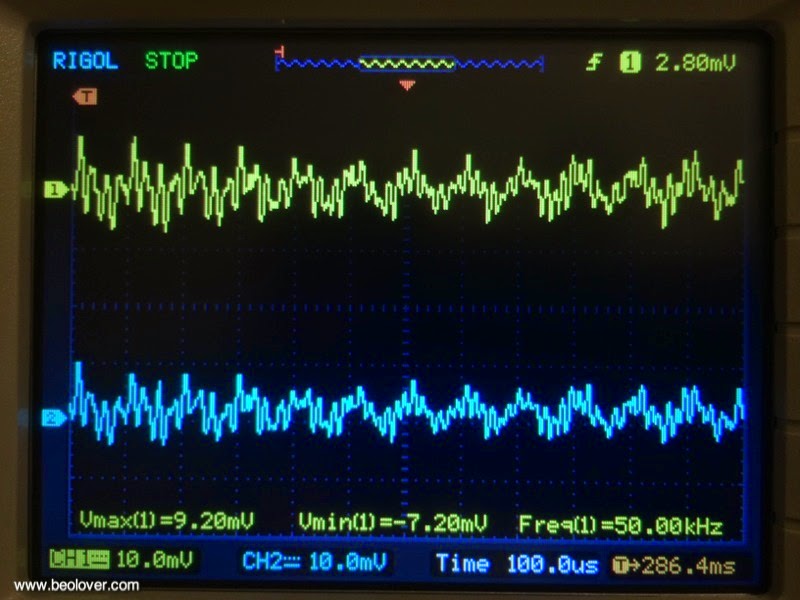 Without the noise the amplitude might be about 10 mV or so, i.e. it were at about 100 mV at 0 dB. That would give us about a factor 7 relative to the 1 kHz signal. 20*log(7)=16.9 dB, which, considering the noisy measurement, is reasonably close to the RIAA curve (from stereophile.com, the blue curve is the curve used on records, the red one is an idealized 6 dB/octave curve, which would be best, but cannot be implemented due to practical reasons), which suggests a pre-emphasis of about 13 dB at 10 kHz: 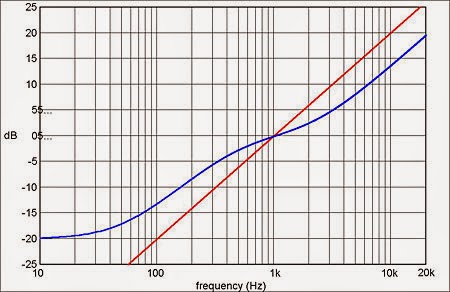 All in all another interesting evening at Beolover's lab...;-)