Beogram 4002: Conversion of the Tracking Sensor Light Bulb to an LED and Adjustment of the Sensor

I started working on a Beogram 4002 that I obtained locally from Craigslist about a year ago. I thought it would be a nice practice run before I give the cherished Beogram 6000 4-Channel a go that I recently found.

I plugged it in after opening it up in the hope to see the location of the smoke should any develop...;-). No smoke, but no tracking either. Pretty much nothing worked, no tone arm lowering etc...also some traces of amateur repairs.

I determined that the light bulb in the tracking sensor was out, and I decided to replace it with an LED since the bulb cannot easily be replaced since it is glued into the sensor housing, i.e. cannot be separated. I also am a fan of LEDs since they have a much better long-term stability, especially should the unit be shipped at some point.

I ended up using a 3D printed part to hold the LED and the current limiting resistor. The part essentially replaced the light bulb fixture on the sensor housing. Here is a picture of the end result: 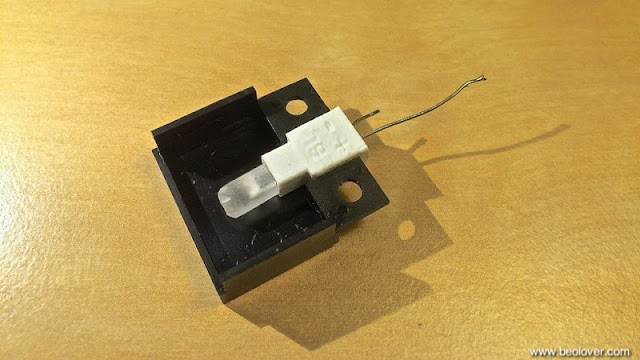 
On to the dead sensor arm!