I noticed that the Beogram 4002 that I am currently fixing up needed a tracking force setting of 1.5g to produce an acceptable undistorted signal with its MMC20EN cartridge. At 1g the signal would be completely distorted. A clear sign that something was wrong with the tracking force adjustment (the cartridge works well on my Beogram 4004...).

It turned out that the arm needed a zero force rebalancing. The counter weight in the back of the tone arm was way too far back. I made a video about the procedure. The video shows how to do the zero force adjustment, and then how to use the tracking force gauge that comes with B&O cartridges to get a precise adjustment of the tracking weight:

It is interesting to note that the scale on the adjustment bushing at the back of the cartridge appears to be only a rough estimate of the weight acting on the needle. In my opinion, this is not surprising considering the design of the mechanism using a variable torsion spring to press the arm down.

There is another issue with this mechanism: The adjustment screw is only held in place at the back plate with a retaining clip, which gives the counter weight 0.5-1 mm play along the arm axis. This, of course, can throw off the zero balance when the turntable is moved after an adjustment. I fixed this in Beogram 4004 with a M3 counter nut and a washer. Since the nut needs to be tightened after the adjustment the weight position changes slightly once the nut is tightened. This requires multiple attempts to get it right, but I think this is worth the effort, since this will lock the adjustment in place for long-term stability. Here is a photo of the installed nut and washer: 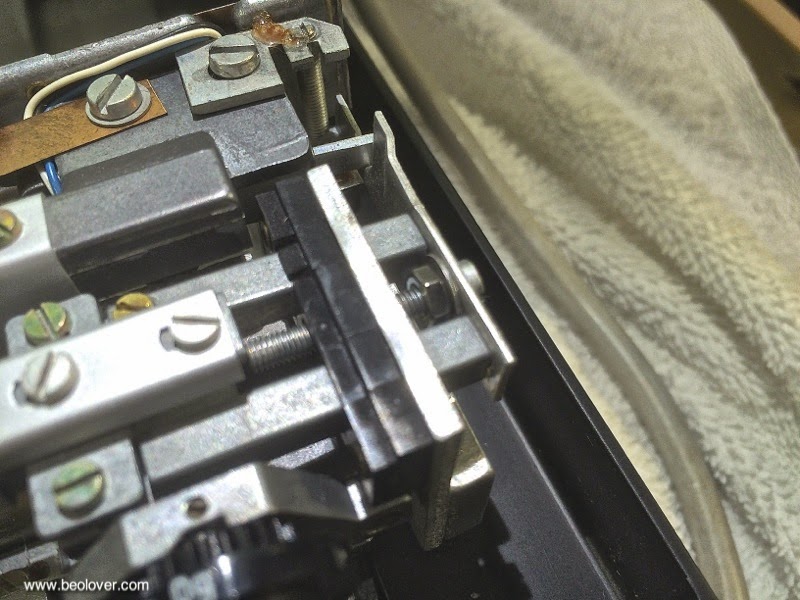