I used my current Beogram 4002 (5513) restoration project as a chance to redesign my earlier approach to replacing the incandescent light bulb in the linear tracking sensor with an LED. In my earlier approach (see here), I reused the bulb housing and just replaced the light bulb part with a 3D printed LED assembly that I had designed as an early (and later abandoned) iteration of my Beomaster 6000 4-Channel incandescent bulb replacement method. While this worked well for the Beogram, it had two significant issues: (1) it was not a drop-in ready solution and required a lot of detail-Dremeling of the original housing to get the glued-in bulb housing separated and replaced, and (2 - probably more important) that the LED position was not very well defined and also not impact/vibration stable. No(2) is clearly an issue when shipping the Beogram, i.e. not suitable for a professional restoration.
So I set out to design a part that is drop-in, 100% mechanically stable, and that is precise enough to only require a small adjustment of the tracking mechanism, which can be done by just turning the executer screw (larger adjustments require a cumbersome realignment of the sensor aperture). The adjustment process is shown in the video below.

Here is a picture of the original bulb housing: 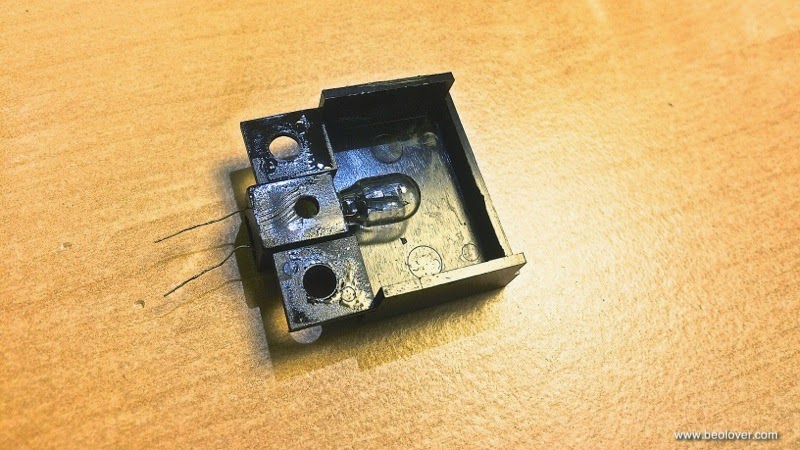 It is interesting to note that the bulb is slightly misaligned, i.e. oriented to one side. I suspect that this reflects 1970's production tolerances, and that most tracking sensor bulb housings will have bulbs at various locations. The obvious consequence is that the installation of a bulb replacement will require the adjustment of the tracking mechanism after installation of the replacement part, independent of the part being an original-style incandescent bulb or a LED replacement.

I designed a part resembling the lower part of the original bulb housing, which is responsible for keeping stray light out of the tracking sensor. Then I combined this part with a custom designed printed circuit board that is responsible for operating the LED.
Here is a picture of the two parts before assembly. The LED is a standard white 0603 SMD LED run with a 2.5 kOhm resistance that it can take the 21V rail of the Beogram. The LED, resistor and the solder points of the leads fit into appropriate cutouts of the housing part: 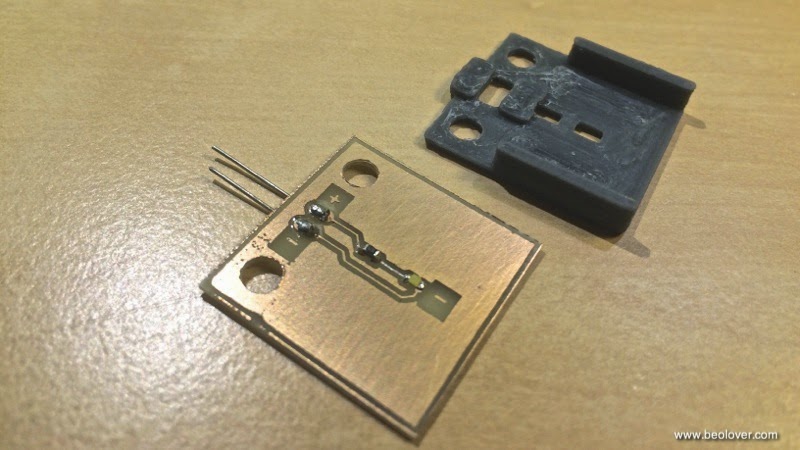 Here is a picture of the running LED after epoxying the circuit board to the housing. The LED is precisely situated in the middle, i.e. very close to the bulb filament position of the original part: 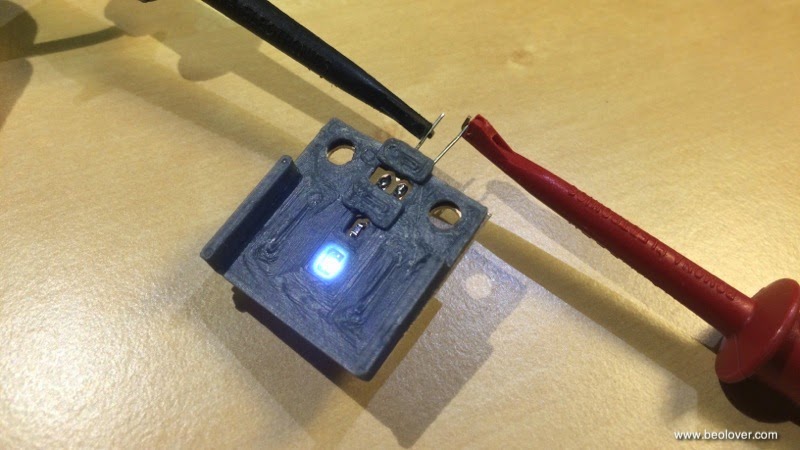 I updated my earlier video about the tracking sensor light bulb replacement with the new part. It goes through all the steps of replacing the original bulb housing and discusses the tracking sensor mechanism. It also shows how a misaligned sensor behaves, and how to adjust it properly: