Extensive tests of the Beocord 5000 (4715/4716) that I rebuilt recently (links to the relevant blog entries) revealed that occasionally, under certain conditions (air humidity in the 60% range and/or low room temperature below ~65F), the leading capstan would stop advancing the tape, with the unwanted consequence that the feed-in capstan would push the tape out into the space between the erase head and the feed-in pinch roller. Luckily, the auto-stop feature of the Beocord reacts fast enough to catch this happening before the tape gets damaged. One of these events is demonstrated at the beginning of the video below.

Experimentation revealed that pressing the leading pinch roller slightly towards its capstan with a finger solved the issue. Cleaning of the roller and capstan did not help much. And since the spring that controls the roller pressure looked pristine and its adjustment nut showed an intact B&O applied red paint spot, I came to the conclusion that most likely the rubber of the pinch roller had hardened, reducing the friction, causing occasional loss of transport. It is important to note here that the tape is transported forward by the friction between the roller and the tape, and not by friction between the capstan and the tape. The capstan only drives the roller via contact above and below the tape.

I searched a bit around on the web trying to find replacement pinch rollers for the Beocord, but to no avail. The issue is that the rollers have a fairly 'rare' diameter of 10.8 mm, which apparently was not used by any of the major tape mechanism manufacturers. It seems that most pinch rollers that were used back then were 1/2 inch. But surfing around on some 'tape heads' web sites and message boards soon yielded the name Terry Witt, who appears to be the only person on our planet who professionally rebuilds classic tape pinch rollers. I read some positive reviews about his work, and so I decided to get in touch. After a short email forth and back, I decided to extract the rollers of another Beocord that I had in my closet and sent them to him for rebuild. I was very pleased by the results! Here is a picture of the rebuilt rollers together with his business card: 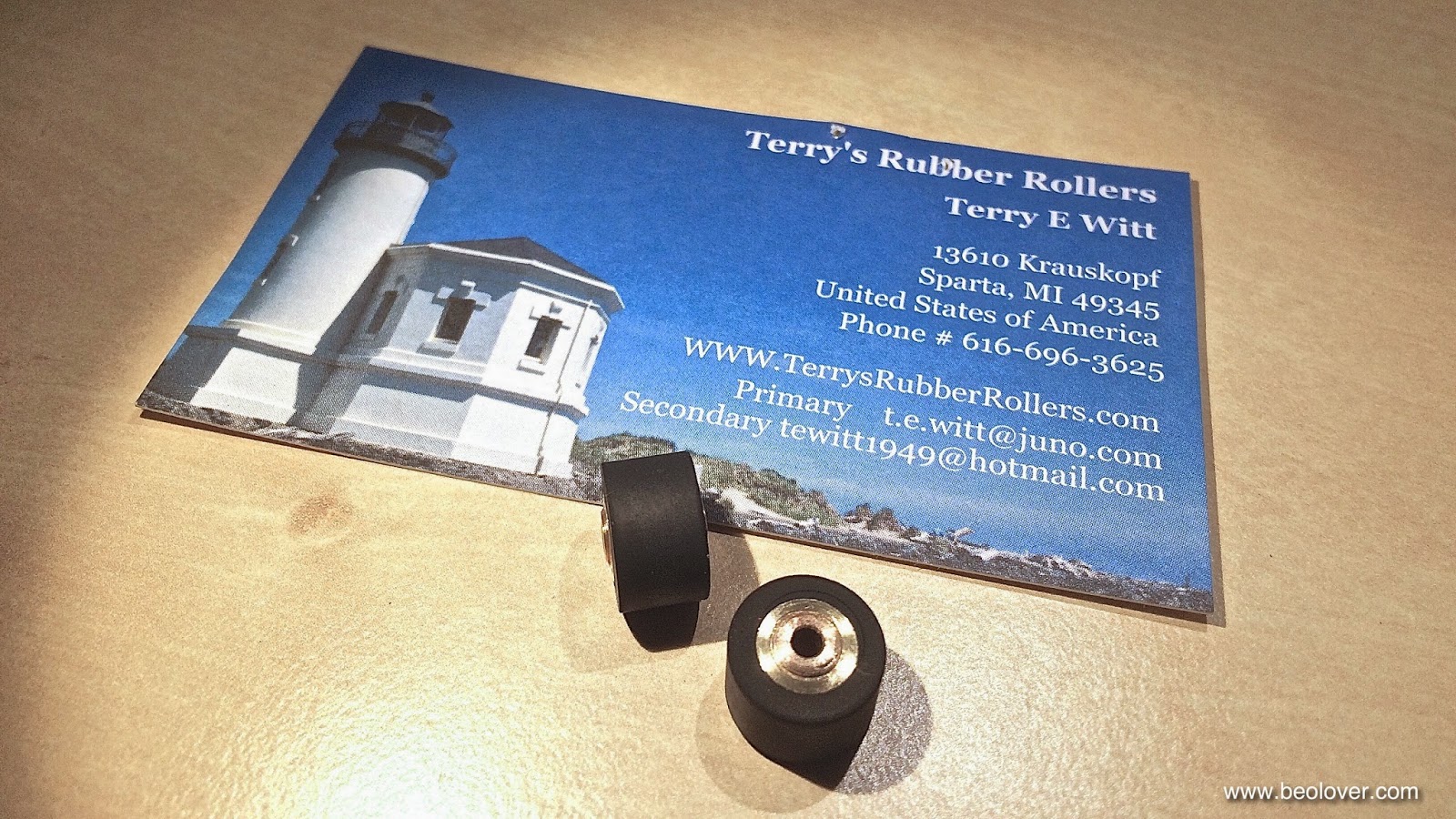 The main challenge with the roller rebuild is to extract them from the Beocord's roller arms. Essentially, one needs to use a vise or press to push out the pins on which they run. Nothing for the faint of heart, but definitely doable. I made a YouTube video about the process:

I tested the deck by now for a few hours after inserting the rebuilt rollers, and everything seems to work great now. But I will only believe it after another couple weeks of testing...one realizes that mechanical issues are where the challenges lie with these old vintage units!
Posted by beolover at 11:41 AM