The final challenge of my current Beomaster 8000 restoration project was to restore full functionality of the control panel cover. When I received the unit, the aluminum cover had lost its spring action, i.e. it would just loosely sit on top of the control panel by means of gravitational forces. In pristine condition, the panel is held down by the plastic lock which fits into a small cutout in the side of the aluminum panel. When pressing 'programming' on the bar between the cover and the lower body of the receiver, the lock releases the panel and it opens at a measured speed, controlled by a motion damper situated below the control panel to which it connects via a acrylic linkage.

In the present unit, the control panel cover lock was mutilated by Mr. Amateur for a reason only known to himself, i.e. it was not able anymore to hold the cover down. He cut off both ends of the small plastic part. Here is a picture of the sad condition of the lock as I found it: 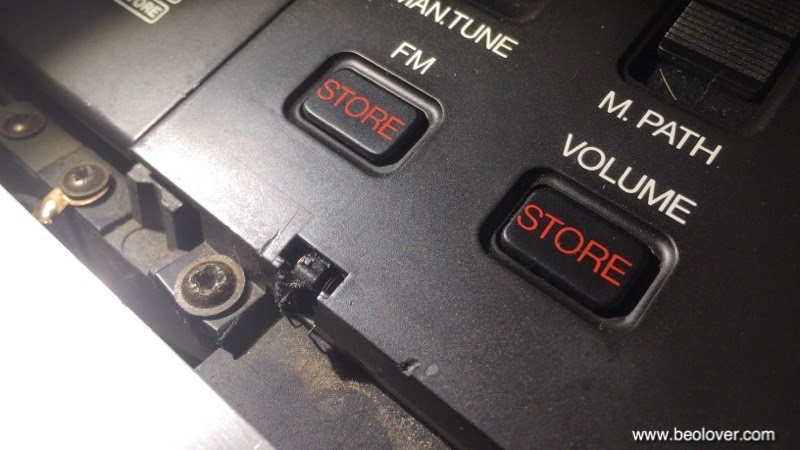 So, the first step towards restoring the full functionality of the cover mechanism was to reproduce the lock part via 3D printing. For this I extracted a pristine lock from one of my three Beomaster 8000s and took measurements. Then I had it 3D printed on a Stratsys uPrint. Here is a photo of the printed part in comparison with the mutilated original: 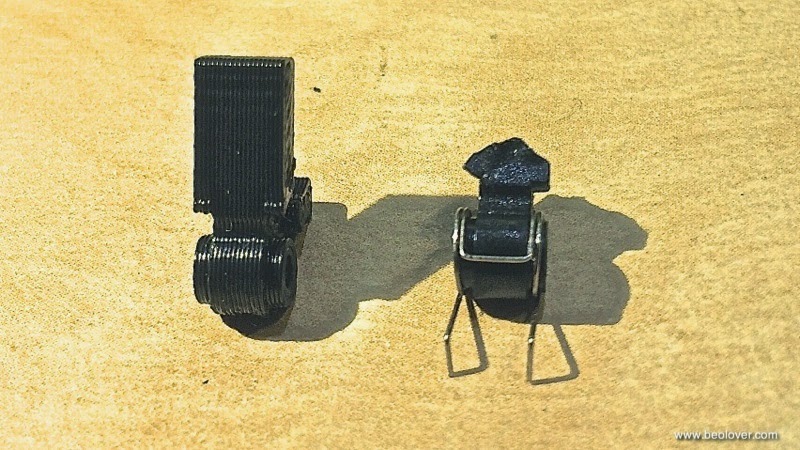 This video discusses the process of replacing the lock:

Unfortunately, Mr. Amateur also disabled the spring mechanism of the cover so it would not open up with the mutilated lock not holding it down anymore. To 'achieve' this he removed the metal plate that holds the spring in place in the back of the aluminum cover part, which released the spring and let the cover fall down freely. This is shown here (the wire loop that sticks out needs to be secured within the plastic body of the panel underpinnings to generate the spring force): 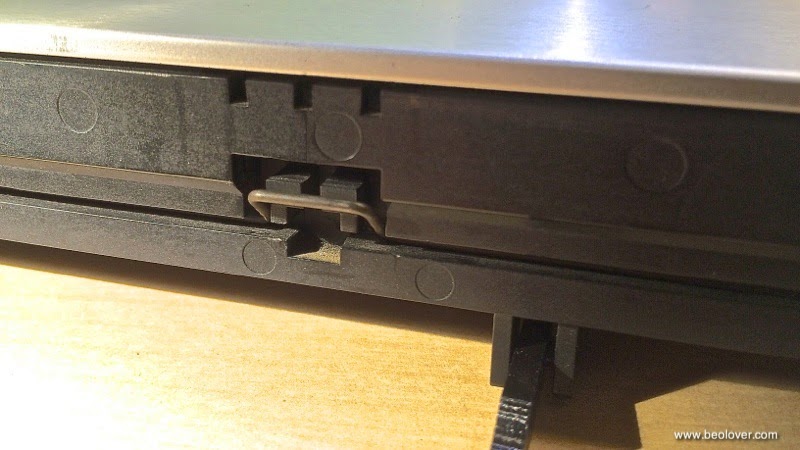 Since the original metal plate was lost, I cut a new metal insert from a piece of galvanized steel sheet, and pressed it into the slot. This reactivated the spring mechanism, and the cover would open again by itself when released from the lock: 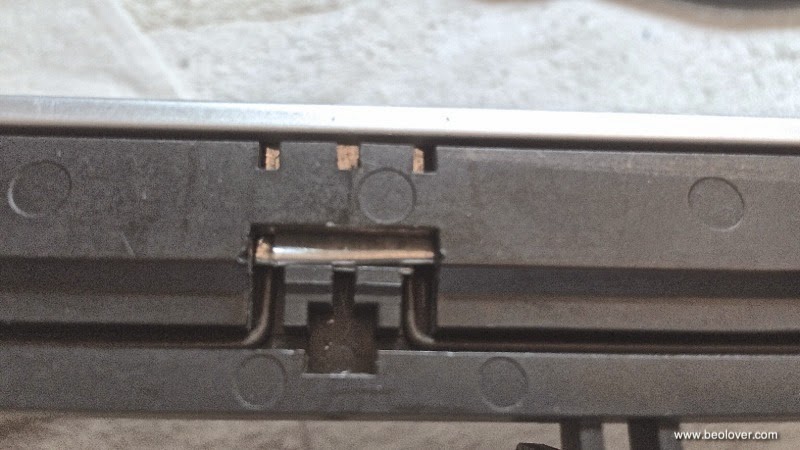 The next step was to restore the damping mechanism. Mr. Amateur disconnected the linkage from the damper at some point and then must have tried to reconnect it, but he did not understand how to reinsert the lower end of the linkage into the arm of the damper (just put the damper arm vertical, and slide the linkage from the right side over it - the gap fits the protrusion on the arm in that position...live and learn...;-). So he opened the gap in the linkage (apparently by slightly melting the linkage over a flame or similar) in an attempt to stick the linkage back on the arm, but this resulted in a situation where the linkage slipped off the damper arm by itself due to the enlarged gap whenever the cover is closed. I fixed this by exchanging the damaged linkage with a 3D printed replacement, which I designed a few months ago for another Beomaster 8000 restoration where the lower part of the linkage was broken off (see here for a description of this effort). Here is a photo of the 3D printed replacement in comparison with the damaged original: 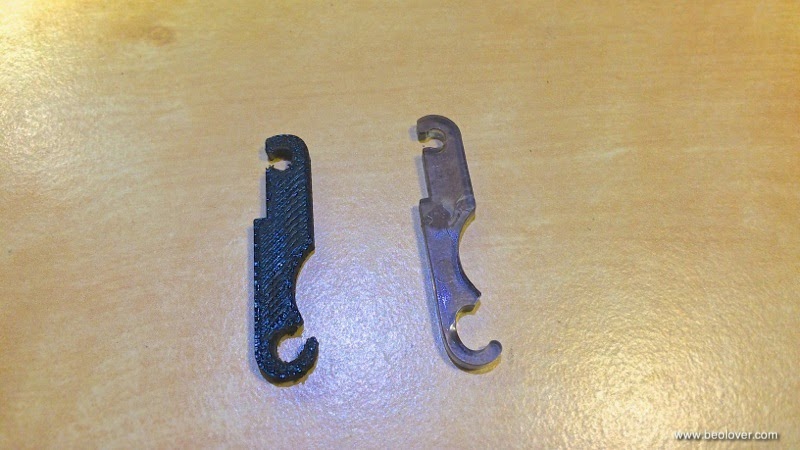 And here installed on the cover: 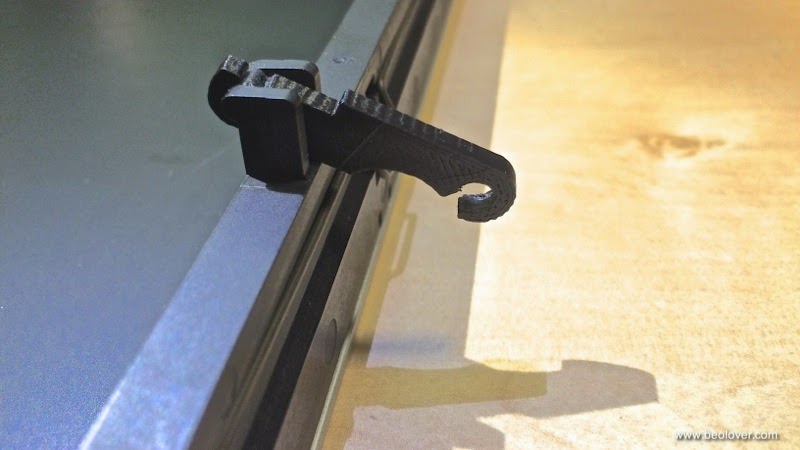 The action of the restored control panel cover is shown at the end of the above video. Now this Beomaster 8000 will be tested embedded in my Beosystem 8000 in its fully restored glory for a couple weeks under 'real life conditions' before it goes back to its owner (to make sure that there are no loose ends under the hood - these complex units tend to have intermittent issues, that often only manifest themselves after a using them for a while)