Well...I did something really stupid. It seems like a repeat of history. I got into this beoloving thing due to a smoking Beomaster 8000, and now I fried one of the four output amplifiers (RR) of the Beomaster 6000 4-Channel!! Exciting! Very!

Here is what happened: I used an only partially insulated screwdriver to adjust the quiescent (quiet) current of the output stages, and when I got to the rear right channel, I slipped with the screwdriver out of the (bent down) trimmer and I very briefly touched the exposed lead of the resistor to the left of it (i.e. 11R96). At the same time, I touched the metal U-shape that holds the output printed circuit board with the upper, non-isolated part of the screwdriver (this is definitely a good moment considering buying a set of electrician screwdrivers...;-). A brief spark at the resistor, and the formerly 7.2 mV across the collector resistor of the PNP Darlington in the output turned into about 150mV, followed by a rapid heating of the respective heat sink (and a dramatic raise in my pulse plus developing sweat...;-). However, the main fuse of the Beomaster did not blow. If you think of it, the 150 mV across 0.12 Ohms correspond to less  than 2 Amps, i.e. this makes somewhat sense. At that point I did not understand why there was so little current, despite both output transistors having been fried (as it turned out when putting the Ohm meter to them via the access granted through the heat sink ribs). Later it became clear that I also fried the emitter resistor of the npn Darlington (11R102)
Oh well, after the initial panic subsided, I discovered that it is actually not too difficult to fix an output stage of the Beomaster 6000 4-Channel, despite the relatively poor service friendliness of the 'everything soldered together' design of this early 1970's construction.
I was not able to find the matched pair of MJ2501 (pnp) and MJ3001 (npn) Darlingtons...it seems they only kept the MJ3001 on the active device list, but dropped the pnp version. Since it is best to use matched pairs in push-pull amps, I decided to use the MJ11015 (pnp) and MJ11016 (npn) pair, which are slightly beefier versions available in the same TO-3 package and with the same DC current gain values. I also replaced the driver for the output, 11TR8 (a BC332, also not available anymore), with a 2N2222A with similar characteristics due to the possibility that this transistor was exposed to maximum rating-approaching voltage levels. On a general note, due to the feedback based design, it is not very crucial what transistors are used as long as they can take power and voltage, are fast enough and have sufficient current gain.

I made a video about the repair procedure:

Here are a few high res pictures of the process:

After removing the two screws that hold the transistors in place the heat sinks can be pushed a bit back and then upwards to reveal access to the transistors. 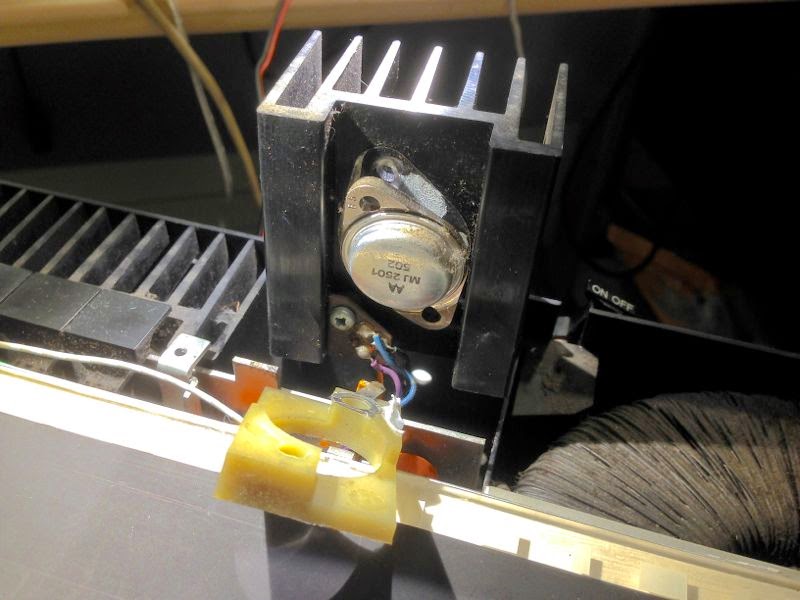 Moto MJ3001 and MJ2501 say hello after their extraction...can one make cuff links from them?? 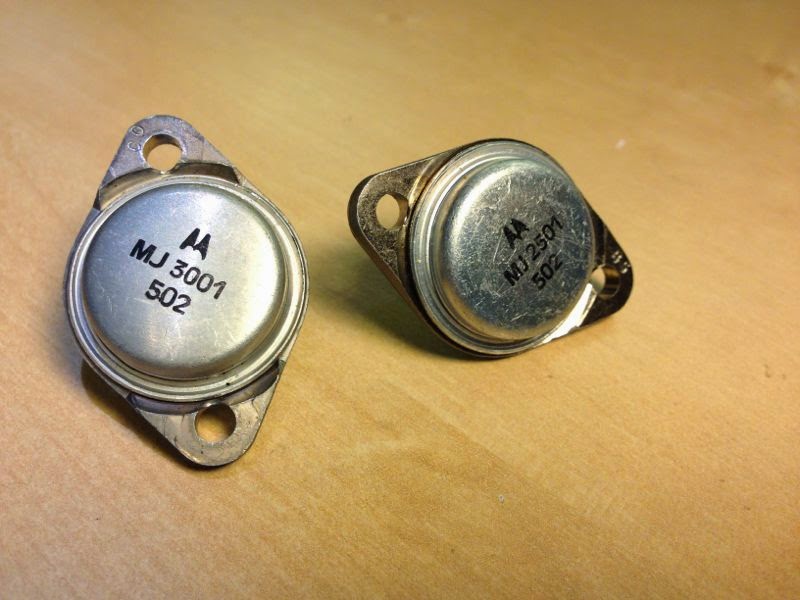 Here is a picture of the pulled circuit board to allow access to the amplifier circuit for replacing the two output resistors. If you do this, do it slowly and deliberately making sure that the wires are all free to move... The right red 'can' on the bottom (hidden underneath the wires) was the resistor that went open circuit (and prevented the fuse from burning by limiting the total current to below 2 A after the transistors died): 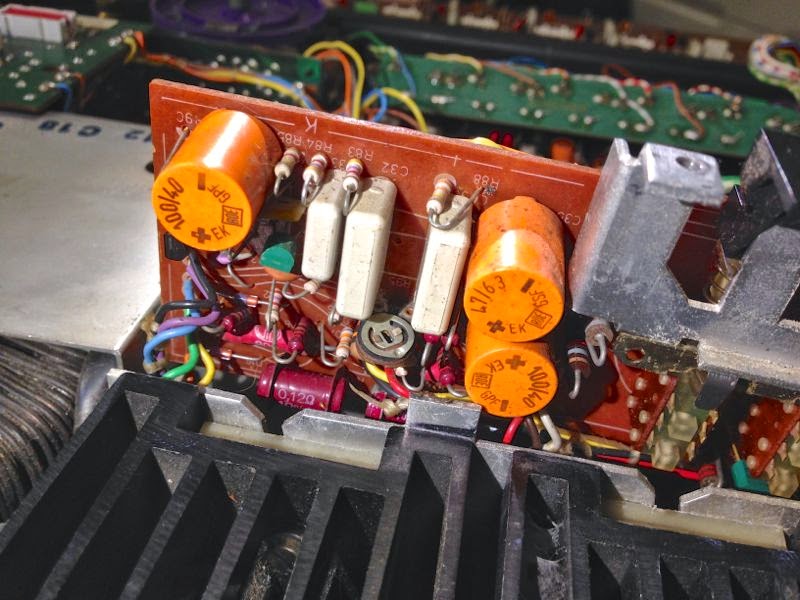 Here is a shot of the old and new resistors (Newark 73M8331, 0.12 Ohm, 3W). I decided to replace both of them to make sure there would be no later surprises: 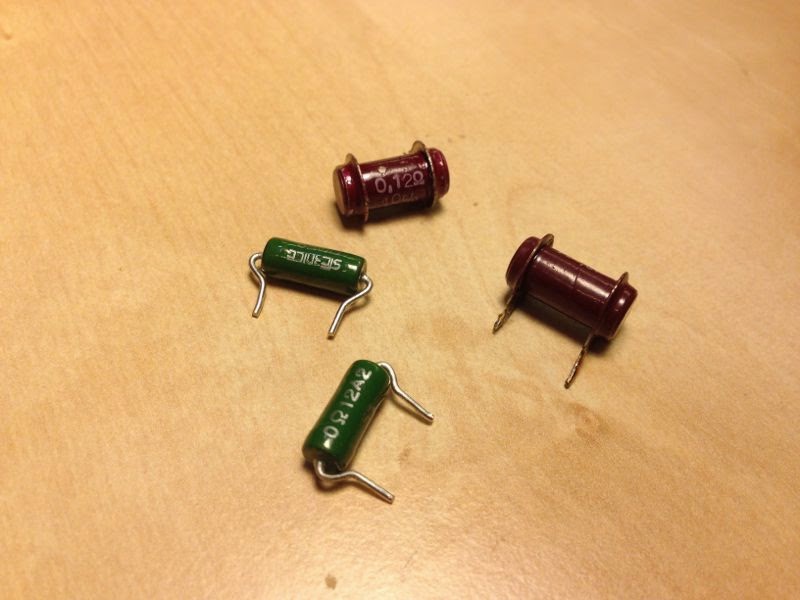 Here is a shot of the amplifier after replacing the resistors and also the electrolytic caps with 105C models (I did that for all four outputs - I also measured the capacitance and ESR for all the extracted caps for the fun of it: not one was out of spec!): 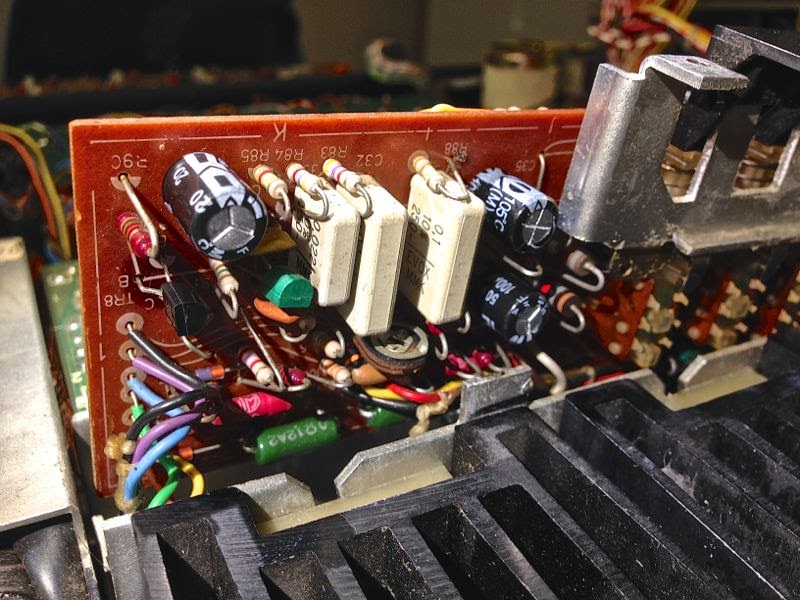 This is how I adjusted the quiescent (quiet) current (shown for the left rear output). It is convenient to simply clip the probes to the emitter leads of the Darlingtons. This measures the voltage across both output resistors (in this case 11R48 and 11R49), i.e on needs to adjust for 2x 7.2mV = 14.4 mV (now, please, do me a favor: use an insulated screwdriver...and put some cardboard sheathing into the U-profile to prevent accidental contact between circuit and ground!...;-): 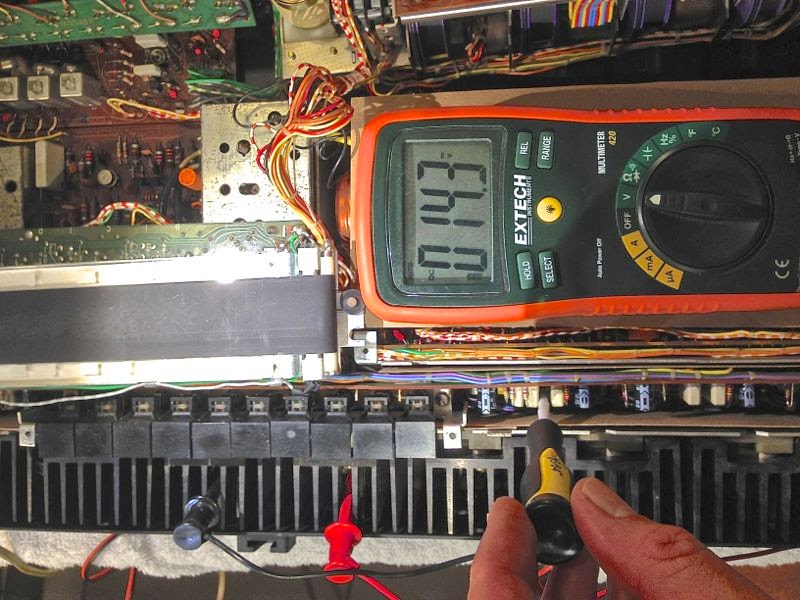 That's it! Back to the actual restoration tasks!