Experience makes life easier! This is my second Beocord 5000 restoration, and so I further streamlined my 'tape mechanism extraction' procedure that I outlined in my earlier post about replacing the belts in these units where I also posted a YouTube video about this process. The first step is to open the unit up. This time I took the plexiglass cover off since it needs to be polished anyway. This makes it much easier to extract the tape mechanism. I also lifted the preamplifier and radio amplifier boards up, since this unit will receive a full recap. Here is a picture of the 'unfolded' unit: 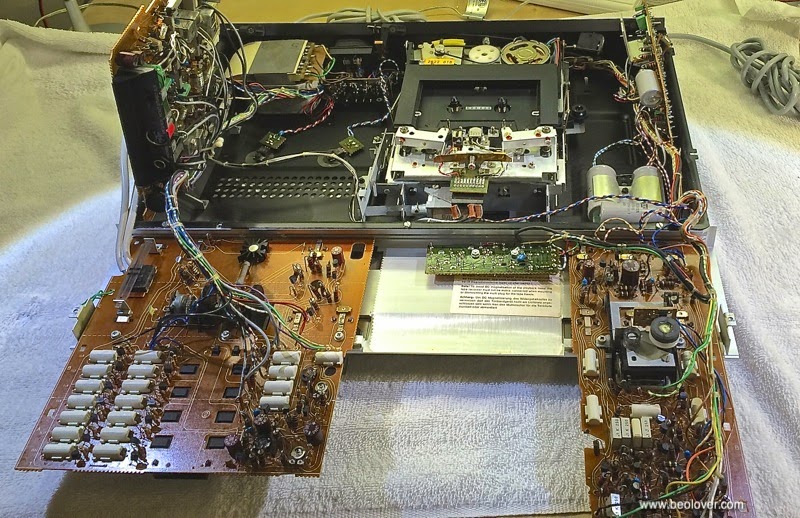 Inspired by earlier comments by 'chartz' of Beoworld.org that one can leave the solenoid in the enclosure when extracting the mechanism I realized that one does not even need to loosen the solenoid fixture if one takes out the screw that holds the bottom cover of the drive in place before taking the mechanism out (I wondered last time why there are three access holes in the front of the enclosure, but did not realize the purpose at that point - live and learn...;-).
That way one does not loose any of the alignment, except for the height of the tape mechanism. This issue was tackled by putting some small dabs of white paint on the two screws that hold the mechanism up relative to the solenoid bracket. Here is a picture of the right screw, and the screw that holds the bottom cover (that is the one that sits in the square cutout of the solenoid bracket): 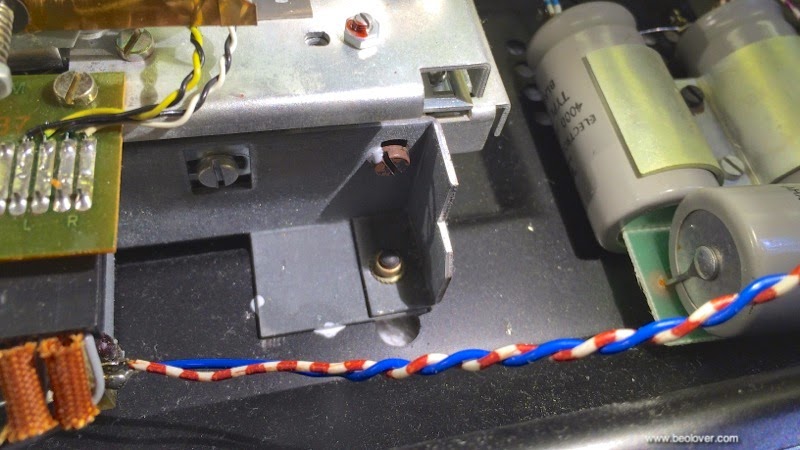 When I took this picture, I was still of the opinion that I needed to move the solenoid a bit forward to get the tape mechanism out, so I marked the position of the bracket relative to the enclosure at the bottom, too. But as said above, this is not necessary. All that is needed is to mark the position of the screws that hold the mechanism to the solenoid bracket (the slightly rusty screw near the center of the photo).
So, in summary, all one needs to do to get the drive out is to take these three screws out at the front, unplug the plug that connects the heads. After driving the counter screw at the back all the way out the drive can be lifted up and unplugged from the connector at the back and taken out (this pic shows the solenoid bracket loosened - I was still in the learning process...;-): 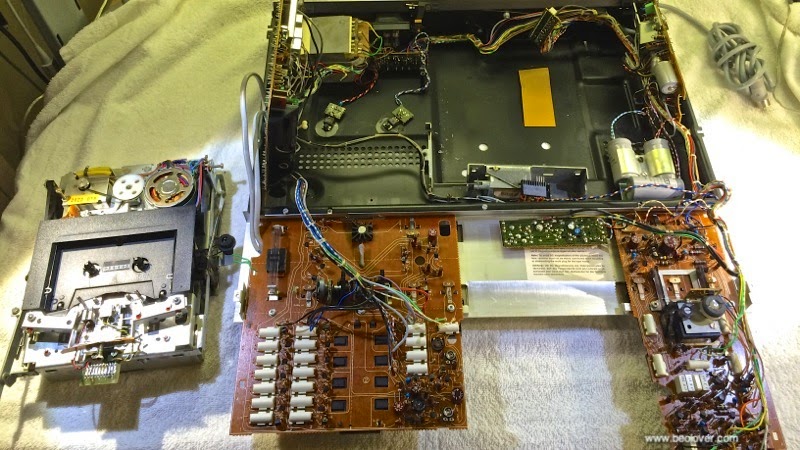 The next step is replacing the belts.
Posted by beolover at 2:30 AM