Happy that the Beocord 5000 (4715/4716) tape mechanism seemed to work, I made a first test recording using my waveform generator. When playing back the tape, I realized that one of the channels was off by about 3 dB on the Peak Program Meter (PPM). This meant that the calibration of the deck was off. Not a surprise, considering the age. I guess this also meant that I was just lucky with the first Beocord 5000 that I rebuilt for my Beolab 6000 set-up, which performs admirably without doing a thorough calibration. Anyway, I felt that the first step towards a solid calibration would be to get a reliable 'frequency response' measurement in place. Frustratingly, none of my bench equipment offered anything useful in this direction. I looked around for free software that would let me do such measurements with my computer (the audio range is quite unchallenging to modern sound cards in PCs).

I was not able to find anything open source that would enable such measurements without too much hassle. But I finally found the 'audioTester', which was written by an enthusiast (Ulrich Müller) in Germany. He offers an evaluation shareware version that allows to do measurements for 10 min before a restart becomes necessary. I downloaded this version onto my old MacBook Pro that I use as my go-to Windows 7 PC in Bootcamp mode whenever I need to use PC-only software. The installation went well and the built in sound card of the MacBook seems adequate for the task. After a bit of experimentation (the owners manual is a bit scant) I was able to make a non-synchronized sweep-measurement to determine the frequency response. It needed to be a non-synchronized measurement since the 2-head Beocord does not offer a monitor function for listening to the recording during the recording process. During a non-synchronized measurement the software determines the frequency of the sound and plots the signal level relative to the measured frequency. This means that for a response measurement, one needs to record a sine wave sweep across the entire spectrum (I did a 60s logarithmic sweep from 10-20kHz), then rewind the tape and during playback the measurement is done. I tested the mechanism by directly feeding the 60s sweep from my waveform generator into the audioTester. The measurement yielded a constant level across the entire spectrum, indicating that the signal path through the MacBook sound card was linear.

After this I did a baseline measurement of the Beocord at 0dB. This requires to adjust the signal level for recording in a way that the Dolby B ICs put out 740mV(RMS) signal at their pin 7. This can be achieved by setting the waveform generator to an amplitude of about 50mV(pp) and using the recording level potentiometer to adjust the recording level to 740mV(RMS) at pin 7 on both ICs for left and right signal path. Dolby should be switched off during calibration.

Here is a shot from my oscilloscope of the 0dB signal at pin 7 at 333kHz (the pp voltage of 2.3V is 0.2V too high due to noise). The RMS voltage is shown at the bottom right corner of the screen.: 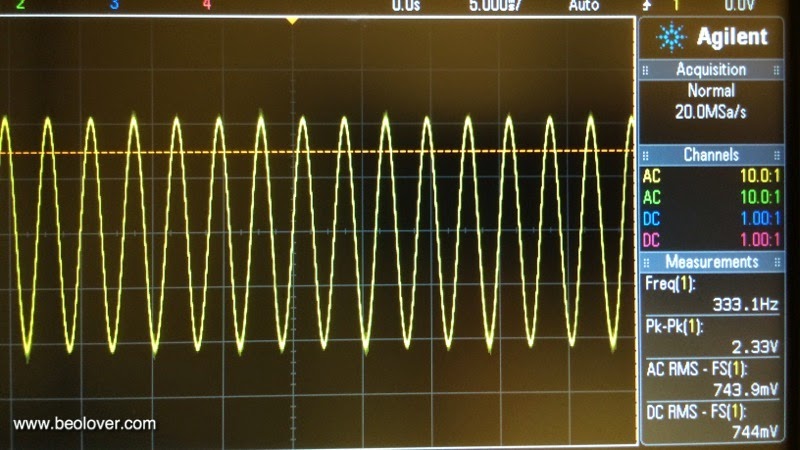 Oscilloscope probe at pin 7 of the Dolby B IC for the right channel: 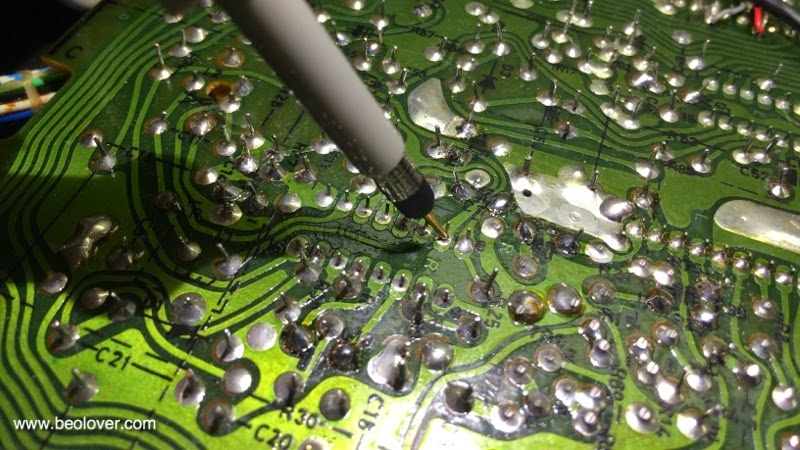 After recording the sweep, the payback yielded this frequency response curve: 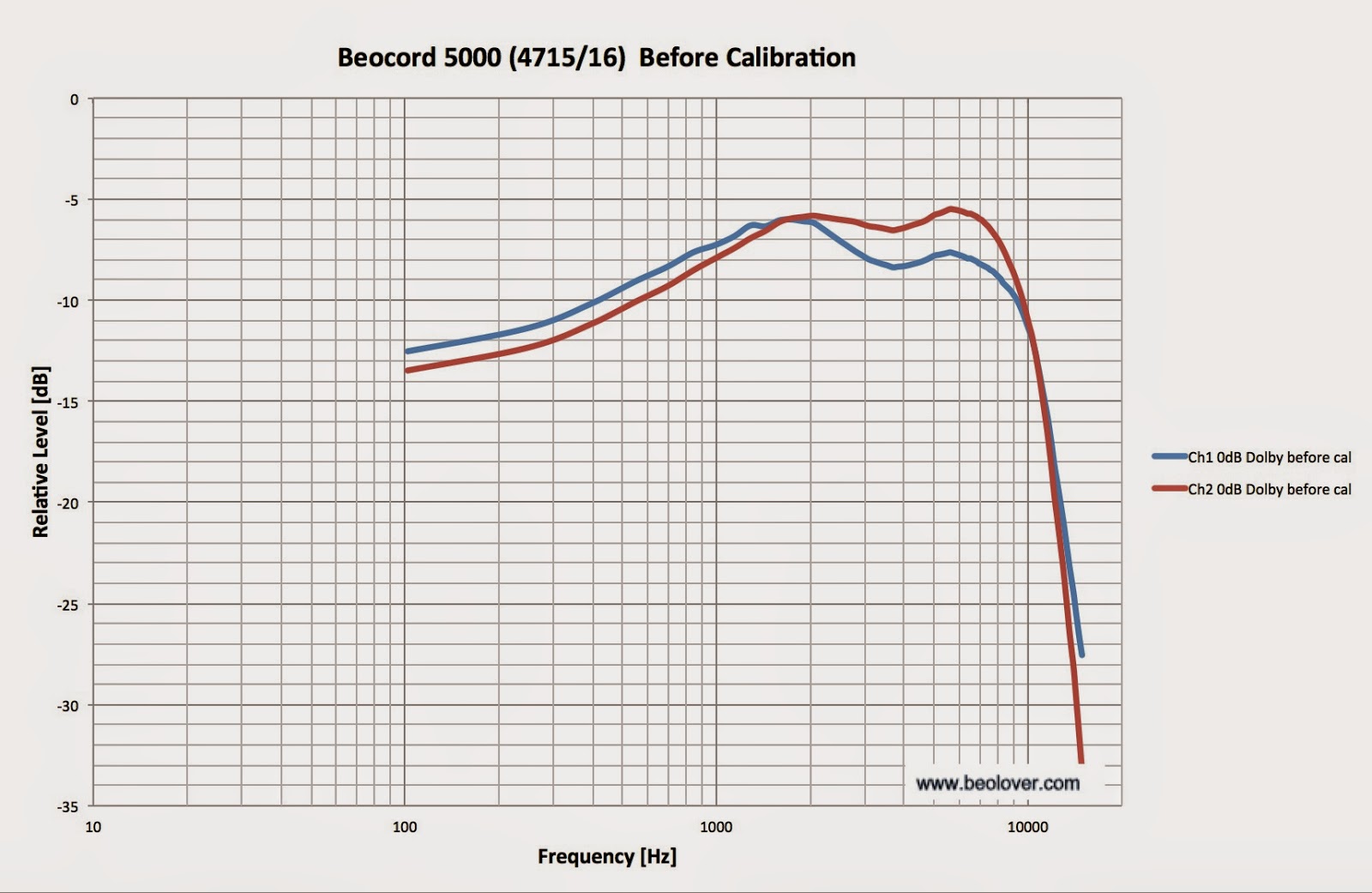 I was still in the learning process with the 'audioTester, which is the reason that the curves only start at 100Hz, but it is obvious that for high frequencies there is a several dB difference between the channels. This explains the discrepancy on the PPMs during playback.
So I set out to do a calibration. I followed the procedure outlined in the service manual. This procedure first adjusts the recording current that playback and recording signals are the same at pin 7 at 333Hz. This adjustment is done for a medium signal level of 200mV(RMS) at pins 7 of the Dolby ICs. The recording current is adjusted with the trimmers 1R99/47 for CrO2 tapes (I used a TDK SA 90).
So the first step is to adjust the Dolby B output to 220mV(RMS): 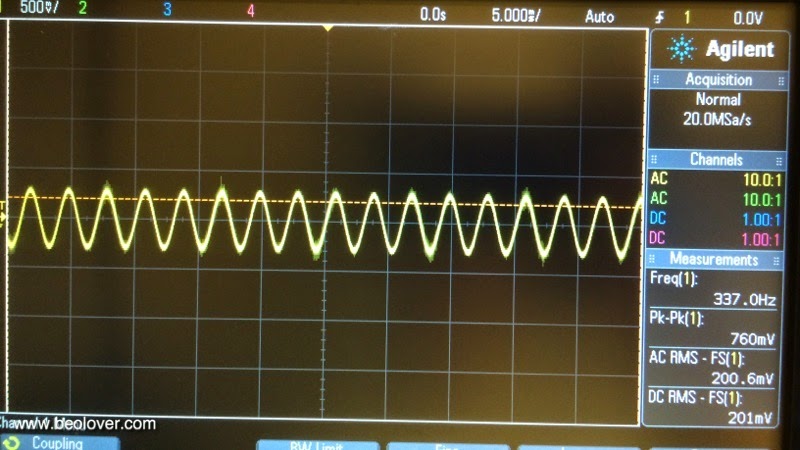 The procedure to get the right adjustment is simply to make a recording, play it back and monitor the signal at pins 7. If the signal is too high turn the respective trimmer (L or R channel, and tape type)clockwise, if it is too low, counter clockwise. Repeat until about 200mV are achieved during playback. The trimmer adjustment is pretty sensitive, i.e. small steps (~5 degrees) are advised. On this pic I am adjusting the left channel during the calibration for a Fe2O3 tape: 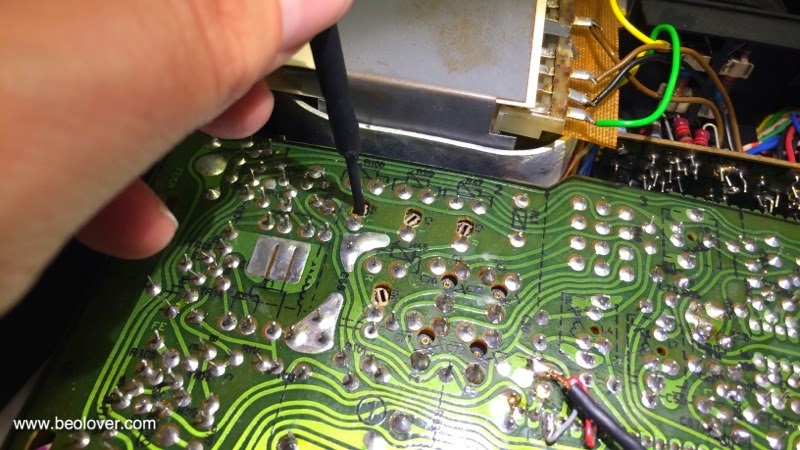 Once the recording current is adjusted properly, it is time to do the 'bias' adjustments. This adjustment sets the amplitude of the 92kHz bias signal that is fed into the erase head. This signal needs to be of perfect amplitude that high frequencies can be recorded properly. The amplitude of the bias signal is adjusted with trimmer capacitors that tune the resonance frequency of a pickup coil that takes the signal up from the bias oscillator.

The procedure for this adjustment is as follows: Set input signal to 333Hz and 22mV(RMS), adjust record level potentiometers that you get 740mV(RMS) on pin 7 of the Dolby ICs. Now reduce the amplitude of the input signal by a factor 20 (-26dB) to 1.1mV (RMS). If the PPMs are calibrated right, only the lowest lamp should be on for each channel. Now set the input signal to 15kHz and adjust the bias trimmers for both channels (C70/72 for CrO2, and C71/73 for Fe2O3) that during playback the same -26 dB signal is seen at pin 7  (37mV RMS) as during recording. Here is a picture when I adjusted the right CrO2 trimmer: 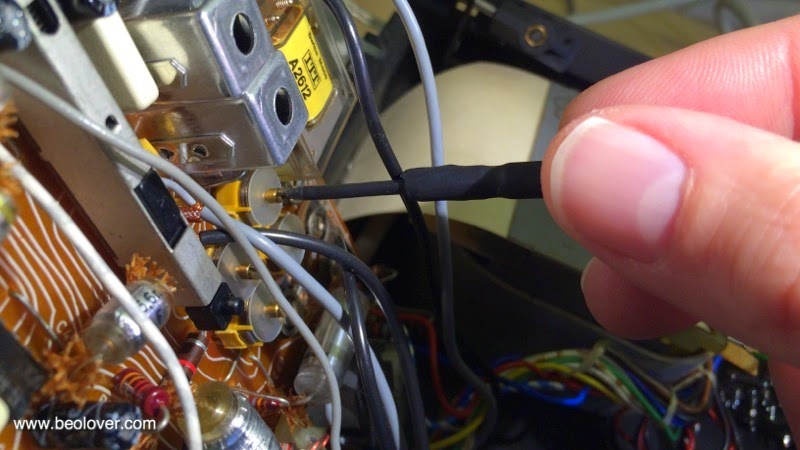 Unfortunately (if one does not have the special tool that fits into the trimmers from the solder side of the PCB - I might 3D print myself one someday...;-), one needs to lift the preamplifier PCB every time an adjustment is made, while the recording requires the board in place that the recording switch can be activated by the solenoid, and that the board is properly grounded. Hence, this is a bit an annoying process. Also the trimmers are very sensitive, i.e. there are a few adjustment cycles to go through until the bias is adjusted properly. 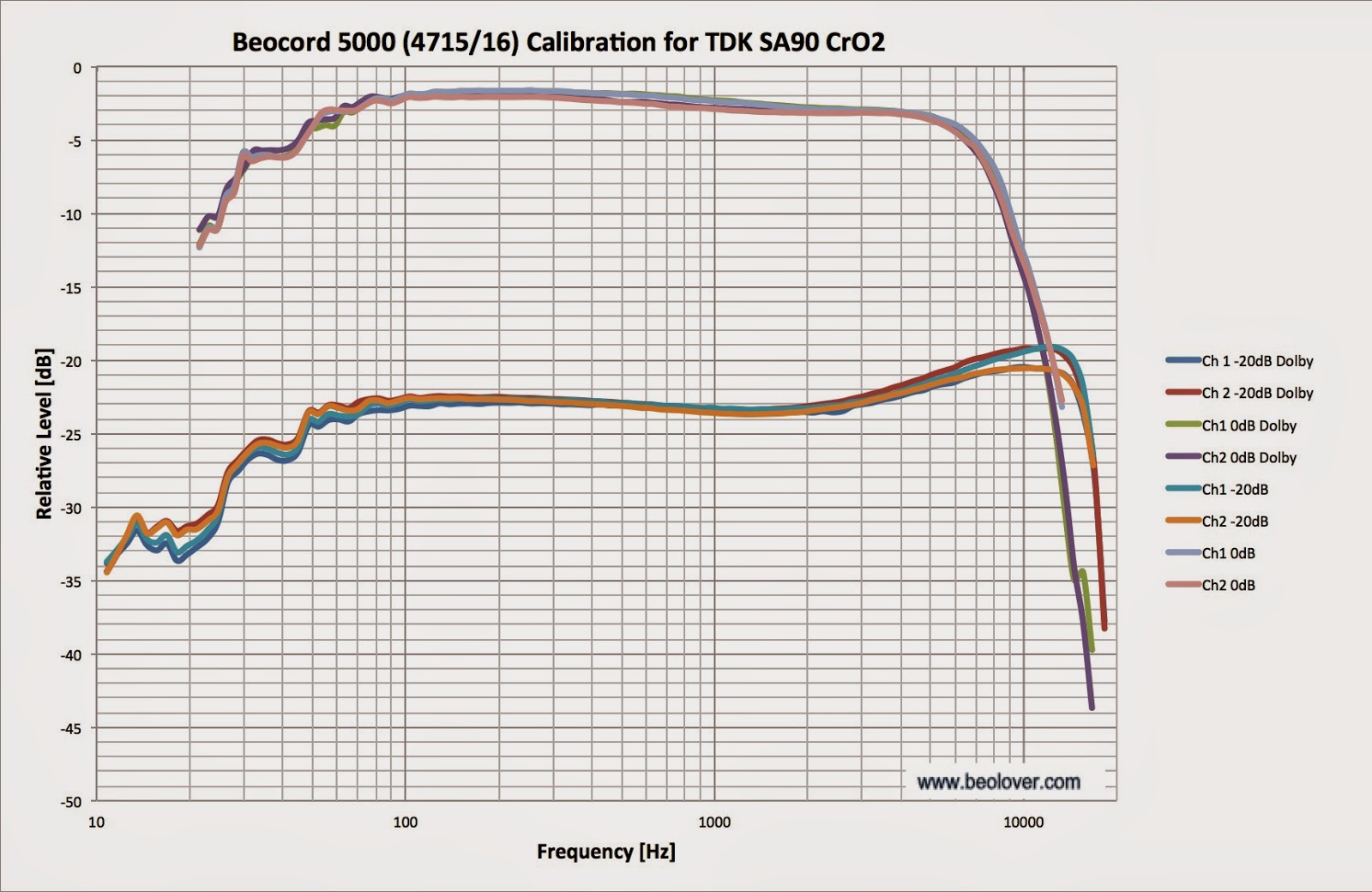 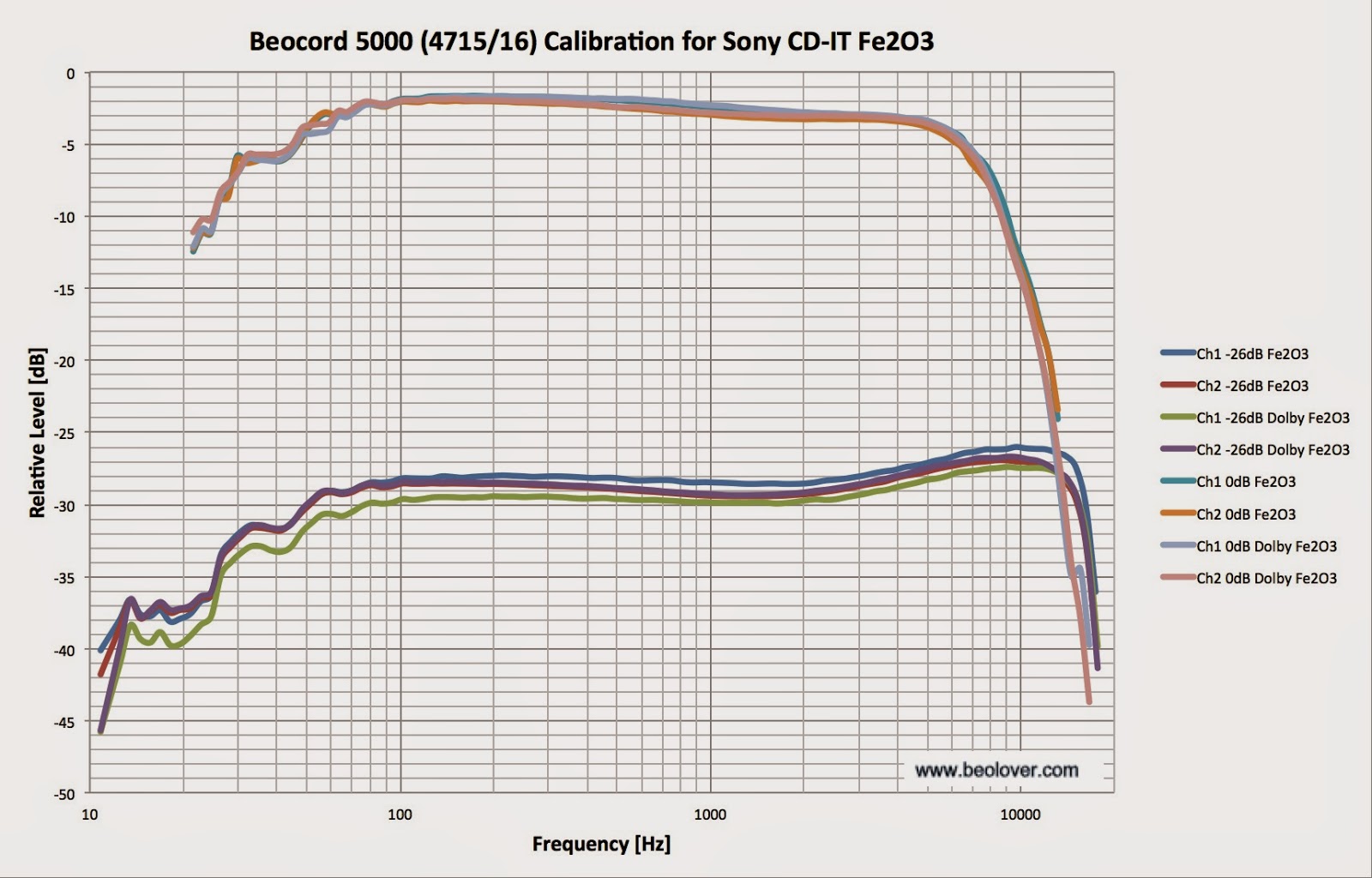 It is remarkable that there is little difference between the two tape types. This is probably a testament to the quality of modern Fe2O3 tape materials. As to be expected the low level (-20dB for CrO2 and -26dB for Fe2O2) are much better at high frequencies than the 0dB curves and reach smoothly to 15kHz. This difference between low and high levels is a common trait of all tape recorders. It is also nice to see that the Dolby B system does not seem to introduce significant distortions. The curves are almost indistinguishable from the non-Dolby curves.

It is interesting to compare these curves with some curves of high quality 3-head decks that are posted online. These curves show a surprising wide range of curve shapes, some even with oscillatory features in them. It seems that the Beocord 5000 holds its own, especially when considering that the measured 3-head decks are all much more 'younger', and that all have a monitor function, i.e. the response was measured during the actual recording process, which optimizes tape positioning etc...