After putting the drive unit back into the enclosure of the Beocord 5000 (4715) I started testing the basic functions. On first glance things were not too bad. It fast forwarded, rewound, played and stopped. However, after playing with it for some time I realized that the Auto Stop function would only work for a few minutes and then quit. The tape would reach the end and the drive mechanism would not quit...probably not good for the motor! Only turning the deck off for an hour or so would bring it back.

I also realized that the Pause function often would not work, i.e. behave inconsistently. Further experimenting showed that rewinding was considerably slower than fast forwarding, and that at the end of the rewind the speed would drop to levels that made me concerned it would just stop. Not what I expected from such nice two-motor drive mechanism. Also, I could not understand why the speeds should be different...practically the same friction should occur (except that the pulleys in the free wheeling mechanism that reverses the winding direction change - but I had lubricated them with a small drop of Ballistol when I took the drive apart, so they are pretty low-friction). Also, manually cranking the motor suggested that there was not much of a difference between directions in terms of torque, i.e. friction could not explain the difference.

So I started investigating. After much measuring this and that and comparing with the voltages stated in the circuit diagram I finally realized that one of the transistors in the Pause flip-flop (3TR27) seemed to have a problem. Its base measured -3.8V when paused and -10.8 when running. It should be -10.2V vs. -10.8V considering the Si turn on voltage of this transistor. And indeed, its sister transistor 3TR26 showed these values. I replaced TR27 with a 2N2222 NPN type and tried again. Low and behold, this fixed all issues. Out of a sudden Pause and Auto Stop were consistent and the reversing speed was normal. After examining the BC548B that I extracted, I had to come to the conclusion that most likely a bad solder joint may have been the problem - the transistor tested o.k...but of course it is difficult to tell...it also may have a heat related issue which only shows up after some time...Anyway, now it works! Analog networks! Definitely interesting to work on them.

For the record: After the repair, the measured winding times for a brand new TDK SA90 tape were about 85 sec in both directions. The auto stop time from the moment the tape would stop was ~7 sec.
Before exchanging TR26, rewinding took about 120 sec, while fast forwarding took about 85 sec. Auto Stop, when it worked was also ~7 sec.

Along the way I did some measurements on the Auto Stop function part of the circuit since initially I suspected the problem there. Initially, I did not understand the terminology in they 1977 circuit diagram. 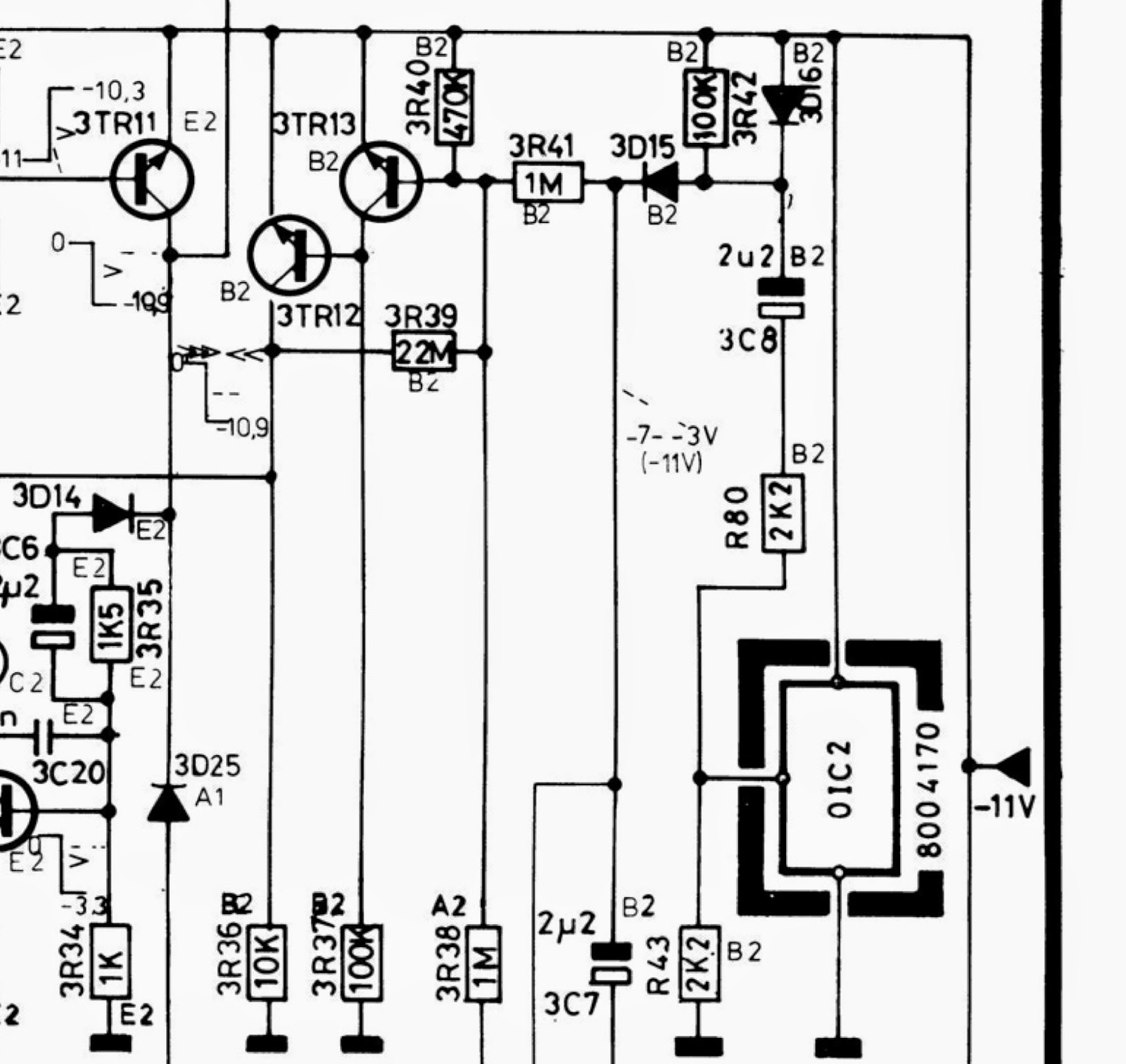 The 0 to -10.9V step at the collector of 3TR12 is actually meant to be a pulse. The >> << is apparently the indicator for this (Initially I thought it was some 'secret' reference to Fast Forward and Rewind..;-). So in the beginning I connected my multimeter, and did not see the expected voltage jump. Finally, hooking up my oscilloscope yielded the pulse: 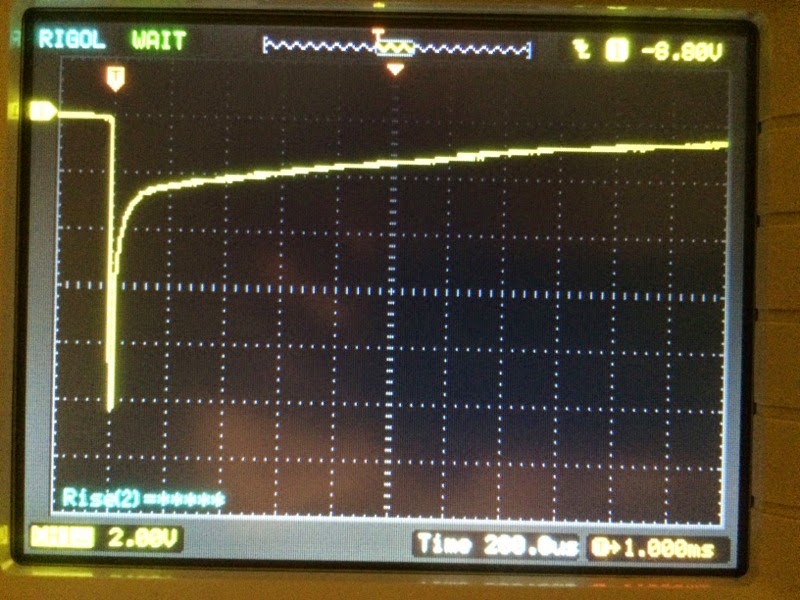 It is only about 10-20 us long while charging 3C5 (100nF) via 3R15 (120R). This makes sense since the time constant of this combination is just about 10us. But this is enough to briefly tug the base of 3TR4 and initiate the Stop function via 3TR5. 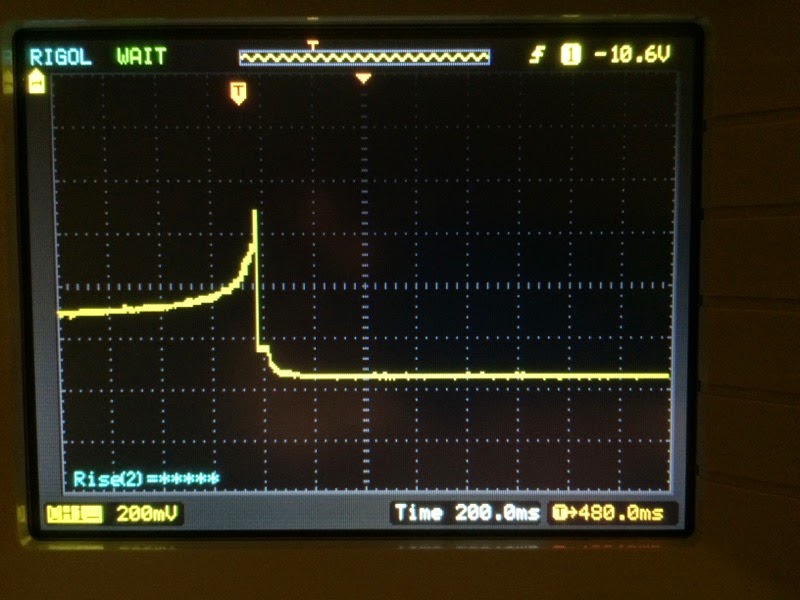 It is interesting to note that connecting the oscilloscope or a multimeter to either side of 3R41 (1M) resulted in a deactivation of the Auto Stop function due to the impact of the internal impedance of the measurement instruments. This network is pretty high impedance, i.e. one needs to be alert with regard to impedance impact on measurements and performance...

Time to try making a recording. Haven't done this in a few years, maybe I'll even make a mix tape...;-).