The next step was to check the main output transistors to see if there was an 'event' in the BM8000's previous life. I measured the resistance between E/C on all TIP141 and 146 on the heat sinks. It turned out that both channels are o.k....even though the left channel has blackened R236/7's, which is a sign for high current in these transistors....
I set out to exchange the electrolyte caps as well as the two trimmers in each of the boards (#5). The pictures show before/after: 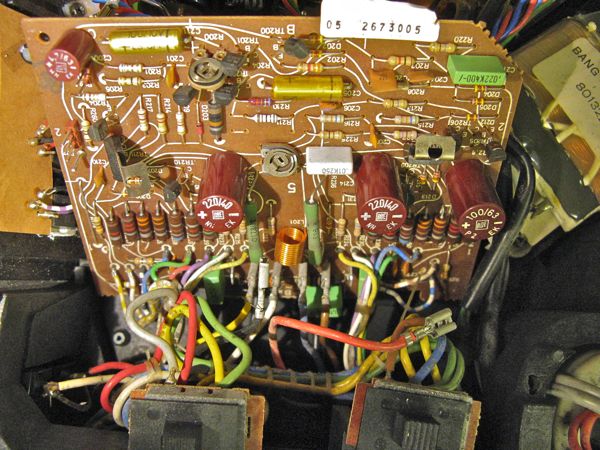 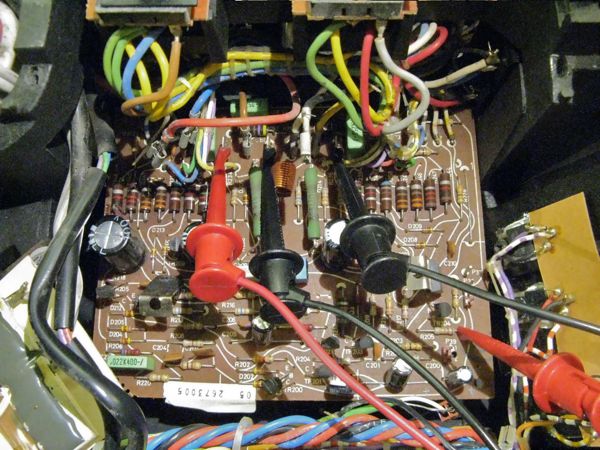 Once the components were replaced, I hooked the board up to three external power supplies with +54V (to 'red' lead connector on the board), -54V (to 'black), GND (to 'blue'), and +15V to pin 2 of connector 38 (I really connected to R205 for easier access). The current limiters were set to 200mA on each of the three supplies. Before turn-on I set R226 (the trimmer that controls the voltage of the bases of the main TIPs) to zero Ohms. This turns the output completely off, i.e. the current into the board is lowest/has the least potential to create mayhem. Then I connected a voltmeter to R236/7. After turning on the three power supplies simultaneously, the currents in the three supplies were near zero. So far so good!!
Then I started increasing the resistance in R226 until the prescribed 18 mV appeared on the voltmeter. The output offset trimmer will be adjusted when everything is plugged back together and the amp runs on the BM power supply.
For better control I replaced the original corroded single-turn R226 trimmer with a modern 11 turn encapsulated cermet 100 Ohm trimmer. Since modern footprints are smaller, I had to extend the slider pin a bit. This is shown here: 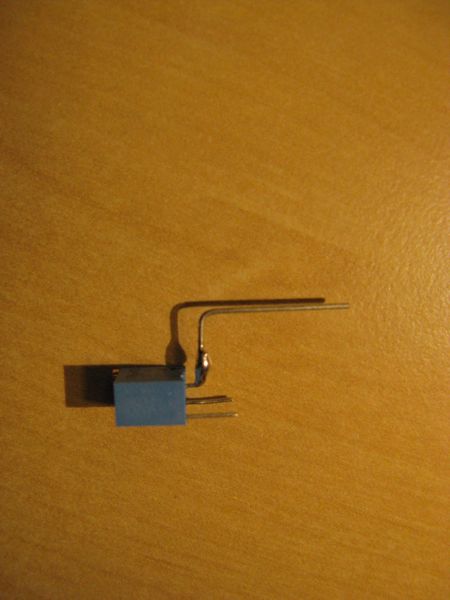 Now I did the same thing to the left channel. Board up, capacitors and trimmers removed and replaced. Start-up with the external power supplies etc...I attached the voltmeter and adjusted the current. Like the other board the external power supplies showed the following currents after adjusting to 18 mV:
+54V--> 0.1A
-54V-->0.11A
+15V-->0.01A
Unfortunately, soon after turning things on, the voltage increased to about ~21 mV, indicating that something may not be stable...
I reduced the voltage to 15 mV and began to monitor. The voltage again crept up over ~20 min to about 17 mV...I turned off, and let things cool down. Again on: Initial voltage at about 14 mV, then over ~20 min again up to ~17 mV. The right channel did not show this behavior. I guess this warrants further investigation.
Posted by beolover at 1:01 AM