After polishing the hood I thought I was done with this Beogram 4000, but not so. A last full performance check before boxing it up revealed a strange fault when ON was pressed with no record on the platter. The carriage would properly travel inwards in search of a record, but then before hitting the end switch ES the carriage would suddenly stop. Only pressing FF would release it from this state. However, then after letting the FF key go the carriage would immediately travel back without even touching the ES. In a healthy state the carriage should travel until the ES is activated and then it should return to the home position.
A closer look revealed that the carriage stopped right when it closed the MV switch that enables the end groove detection mechanism. Here is the relevant section of the circuit diagram: 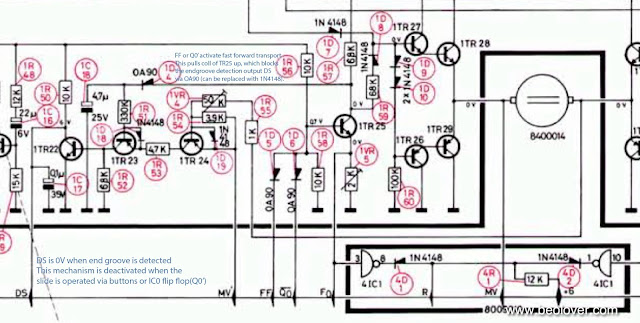 Here is how it works: Whenever the MV switch is activated by the slide, MV' and MV are connected in the diagram. This puts part of the voltage on the motor across BE of TR24. So whenever the motor revs a bit higher, such as when the needle enters the end groove, the transistors 24/23/22 are activated and DS finally goes LOW. This tells the control system that it is time to lift the arm and drive the carriage home. Now this mechanism is of course only useful when the needle is on the record and entering the end groove. When the arm is up and the carriage is driven forward or backward this mechanism needs to be disabled. This is achieved via D4 which feeds the collector of TR25 into the base of TR23.
The collector can only be high if FF is activated either by pressing the key or via Q0' which is LOW whenever the carriage is driven towards the center of the record after pressing ON. The tracking mechanism does not use TR25 since it directly goes into TR27/28, i.e. end groove detection is not disabled if the carriage tracks normally.

Further tests of the matter revealed that Q0' remained LOW even as the carriage stopped. This told me that the control system was still of the opinion that the carriage should move, hence the fault needed to be on the executive side of the system, i.e. right here in the MV circuit. I measured D4 from the back of the installed main PCB and promptly saw that it was open circuit, which killed the deactivation mechanism, and the end groove detection mechanism was active even with the arm up. After turing the board around I saw that the diode was cracked in half: 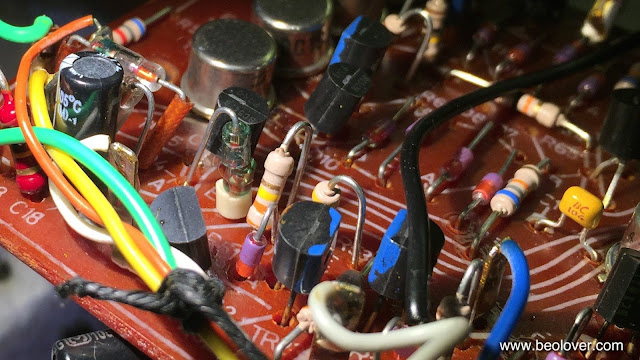 The original OA90 diode is a Germanium diode, but can easily be replaced with a modern 1N4148 Si signal diode since its only function is to block any voltage from the MV circuit to apply to the collector of TR25. Here is a picture of the 4148 installed: 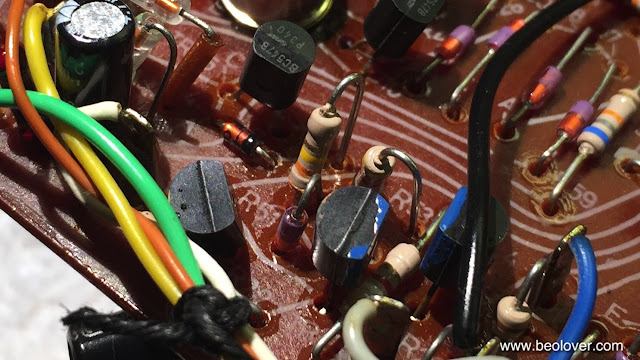 After this I replaced the board and gave the deck a test drive. All good again. Listening to Walt Dickerson's "To My Queen" while I write this, which is definitely one of my all time jazz favorites. O.k. maybe now it is time to finally send this 4000 back to its owner.