The last post left off with the cabinet being prepared for repair and the Beogram 8000 floating chassis components only needing a few remaining service manual checks.

The service manual checks I ran were for the fixed arm height to the turntable platter surface, the tracking force calibration and the tangential tracking sensor sensitivity adjustment.

On these checks I want to use the platter while making measurements but I don't want the platter to rotate.
In order to disable the platter drive but still allow the Beogram 8000 to operate you disconnect the P4 connector from the main board. 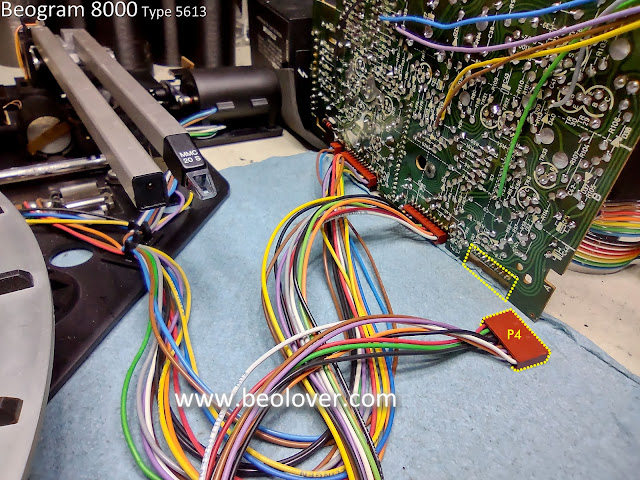 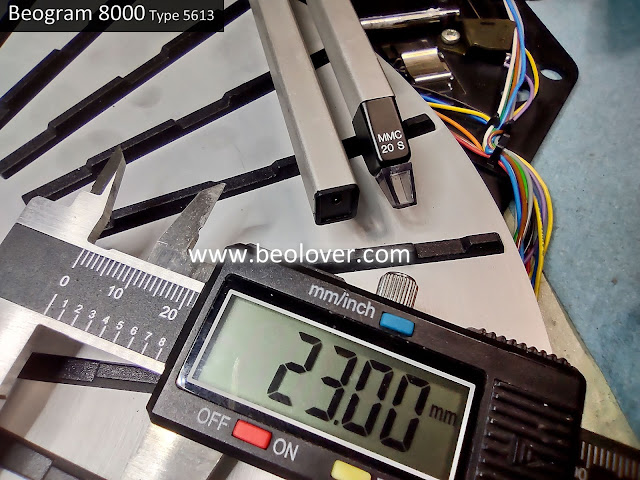 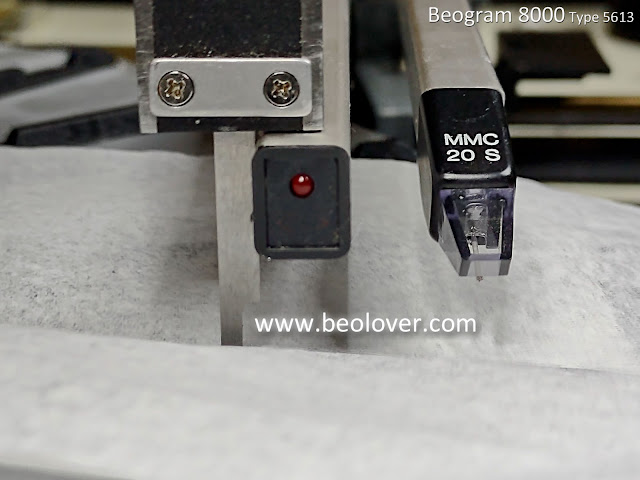 I like to set the tracking force adjustment knob (along the side of the tonearm) to 1 gram, then move the counterweight as needed to get a 1 gram reading on the tracking force gauge.
The most common setting for an MMC cartridge on the Beogram 8000 will be between 1 and 1.3 grams. 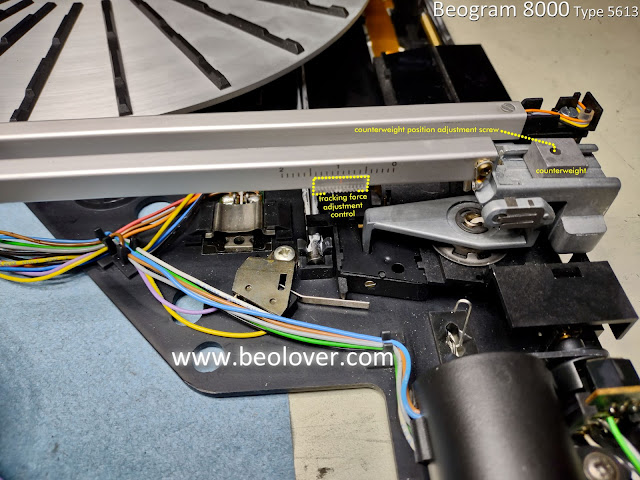 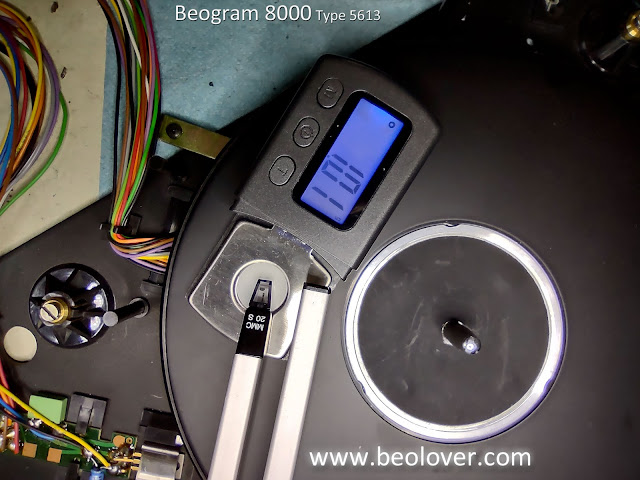 The last adjustment I had to make was for the Beogram 8000 tangential tracking sensitivity.
The tangential arm assembly is moved forward during record play by detecting when the record groove is taking the stylus inward towards the center of the record.

A metal diaphram bracket attaches to the tonearm pivoting base. As record play causes the tonearm to pivot, the diaphram moves and allows more light to enter the sensor.  The Beogram tracking circuit instructs the servo motor to advance the tonearm when some voltage threshold (from the sensor) is exceeded.  When the arm pivots back to its perfect tangential position, the circuit stops the servo motor again.

That is a simplistic description of how the tangential tracking works of course but important to note that the sensitivity of the circuit that detects and controls the servo motor is adjusted per the service manual.

The adjustment procedure is to place a record on the platter with the platter drive disabled (by disconnecting connector P4 as shown earlier).
Ideally one would have the B&O Test Record 3621001 and use Track #5.
I have never found that test record so I use two or three different test records to make my adjustments with.
The Beogram 8000 record play is started and the tonearm moved to one of the middle tracks where I lower the arm.
The servo motor should be still after setting down on a track since the platter is not moving.

Next, manually rotate the platter and observe when the servo motor first advances the tangential arm assembly.  It should occur between 1 and 3 revolutions of the record.  I like to set the sensitivity where it advances at 1 revolution.

After the first revolution the servo motor should continue to advance the arm assembly every revolution.

If the Beogram 8000 servo motor is not advancing within those limits the sensitivity of the tracking is adjusted using the adjustment screw on the side of the tracking sensor housing. 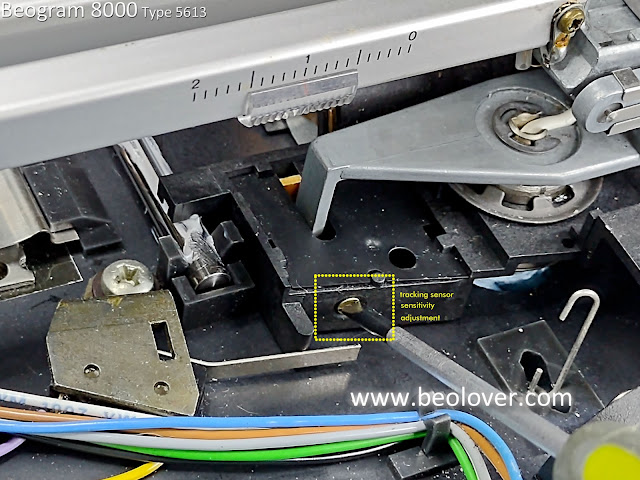 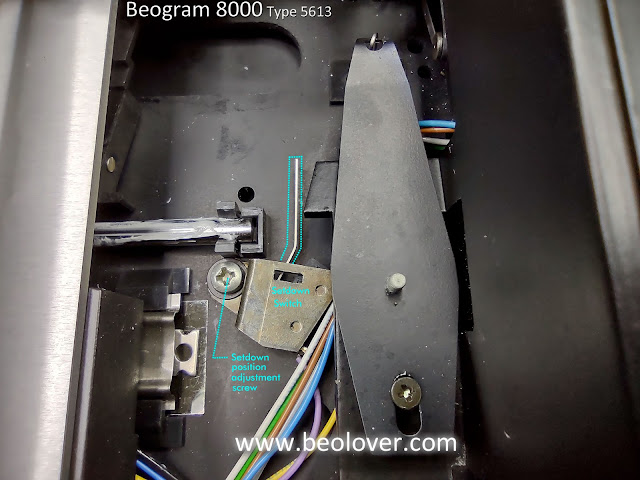 The record set down for a 12" (30 cm) and 7" (17 cm) record was good and the servo motor advanced through the lead-in grooves properly. 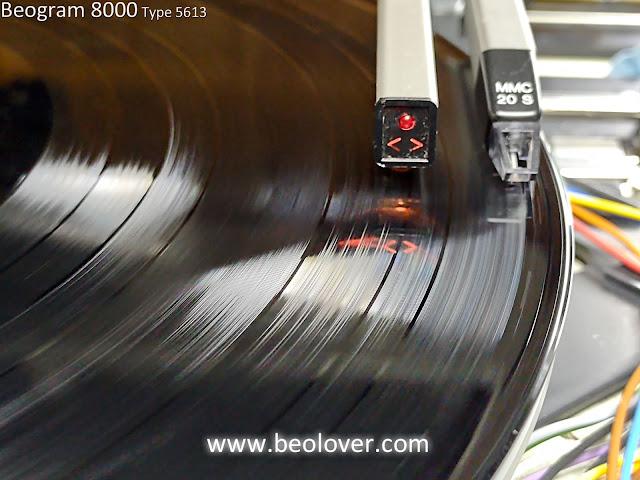 Next I checked the Beogram's handling of the run-out groove to make sure it detected the end of the record properly and returned to the parked (Standby) position. 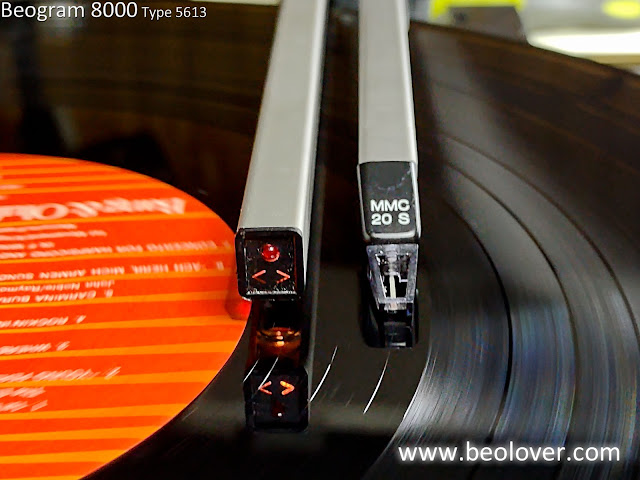 As expected, that was handled successfully by the Beogram 8000 uC.
A final functional test was to check how the Beogram 8000 handled a Pause in record play.
The Pause function invokes automatically if Pause is pressed during record play and the arm left hovering over the spot that was paused.  After a few seconds the Beogram will return the arm to the parked position but without the Standby "dot" displayed.  Instead, it displays a speed integer that the Beogram was at when Pause was pressed.

To continue from a paused record play event the Play button is pressed and the Beogram 8000 should return to the point in the record where Pause was engaged and begin record play there.

As I was performing the various Beogram 8000 service manual checks I continued with the cabinet reassembly. 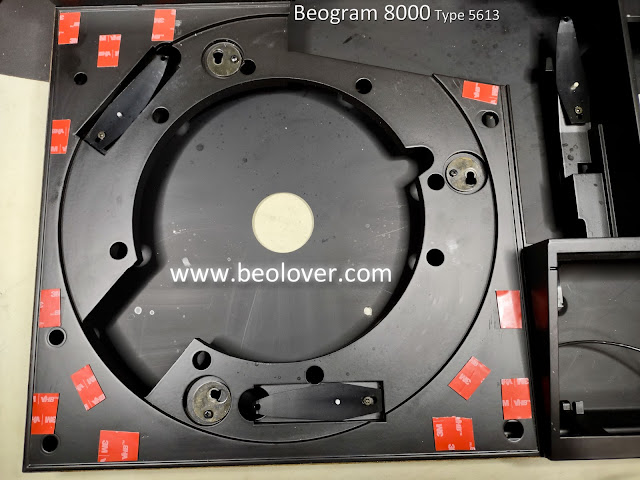 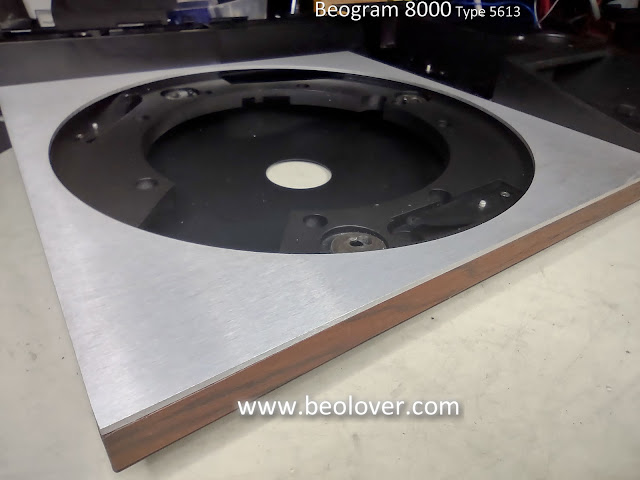 The next few steps were installing the floating chassis, circuit boards, transformer and control panel. 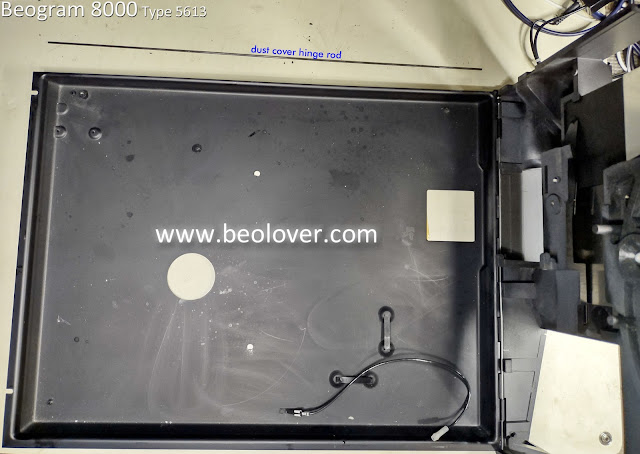 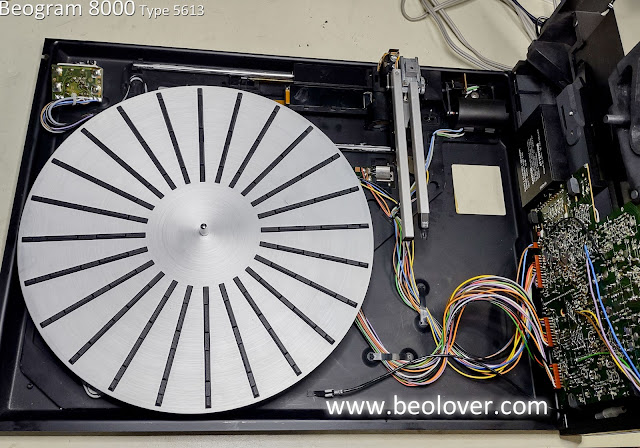 I closed the Beogram cabinet from its service position and engaged the three floating suspension spring clips. 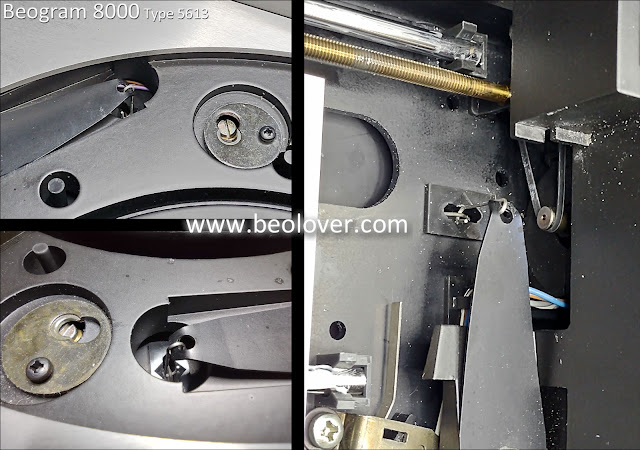 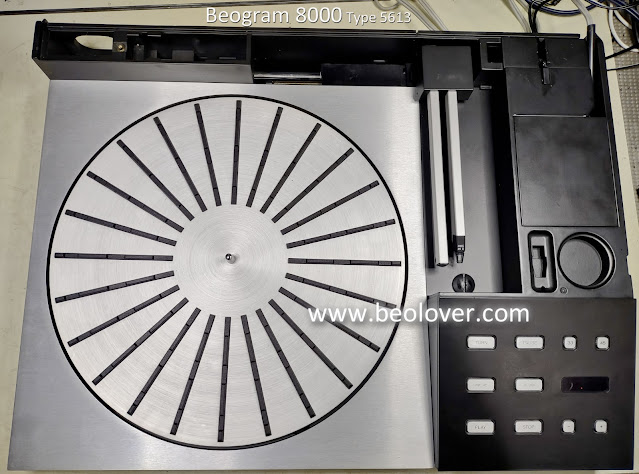 At this point I would usually already have the dust cover and tonearm compartment lid attached or would be doing that task here.

However, I ran into a problem with the dust cover assembly on this Beogram 8000.

In my earlier assessment I had seen that the dust cover was not assembled correctly but I thought the damage was minimal and would be easily fixed.

That turned out to be incorrect.

As this photo shows, the section of the dust cover where the dust cover damping hinge connects has a broken loop.  So does the loop on the rear cabinet bracket. 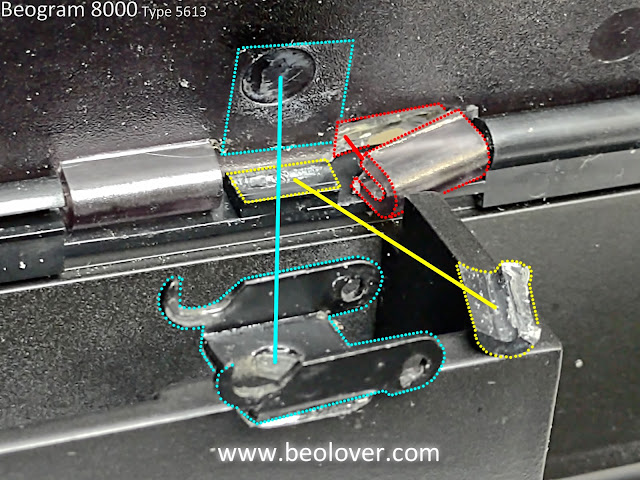 The hinge rod has to fit through the plastic loops and the two metal holes in the damping mechanism's metal bracket.

With the plastic loops broken (as seen in the photo) the dust cover function will not be reliable.
I attempted to epoxy the broken, plastic loops but even after 36 hours of curing, the epoxied joints did not hold up.

It is unfortunate as well that two key pieces are broken.
The dust cover assembly has a broken loop and so does the back plate of the cabinet.

My repair for this case is to replace the original dust cover and cabinet back plate with a couple of spares.  Luckily I have a set but have to glue the metal damping hinge for that dust cover back on.
The replacement dust cover also needs some polishing to try and remove some of the light dust cover scratches.
Meanwhile I can continue on with record play testing of this Beogram 8000 unit while I work on the new dust cover.

Posted by sonavoraudio at 2:32 AM