I left off the Beogram CD50 project having disassembled the unit to clean off old belt residue and replace the belt (for the CD tray mechanism).

While I had the CD50 disassembled I took a little time to examine the internal electronics and decide if I needed to replace any electrolytic capacitors. The usual case for vintage amplifier and turntable restorations is to replace all of the old electrolytic capacitors due to many (or most, in a lot of cases) being well out of tolerance at this point of their life.  The CD50 is now getting on thirty years old so the capacitors were a concern to me.

In checking with other CD50 restorers I found out that the electrolytic capacitors in the CD50 are usually still good so a complete replacement is not necessary.  Having never checked or replaced the capacitors in a Beogram CD50 I decided I would investigate myself.

My plan was to go through and pull capacitors, measure them and replace them if necessary.

The capacitors I examined are the ones on the three main circuit boards.
PCB 1 (Display and Key Control), PCB 7 (Servo) and PCB 8 (Decoder & Power Supply).
I am not going to disassemble the front assembly of the CD50 for any of the display boards there.

Here is a look at the three boards that have the capacitors I am going to look at.
This is how the components were oriented when the CD50 cabinet was first opened up. 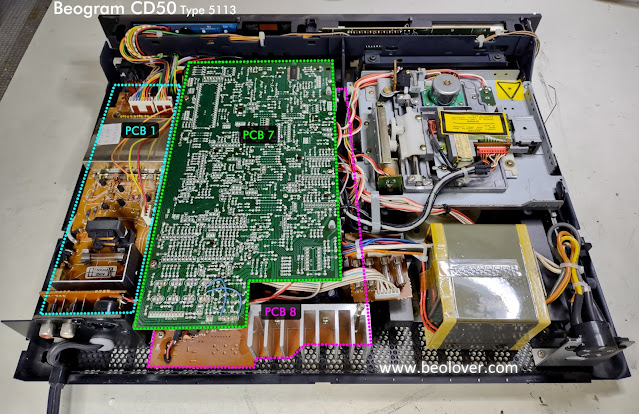 The work on the CD tray mechanism required quite a bit of disassembly to where I now have full access to the circuit boards I want to examine the capacitors on. 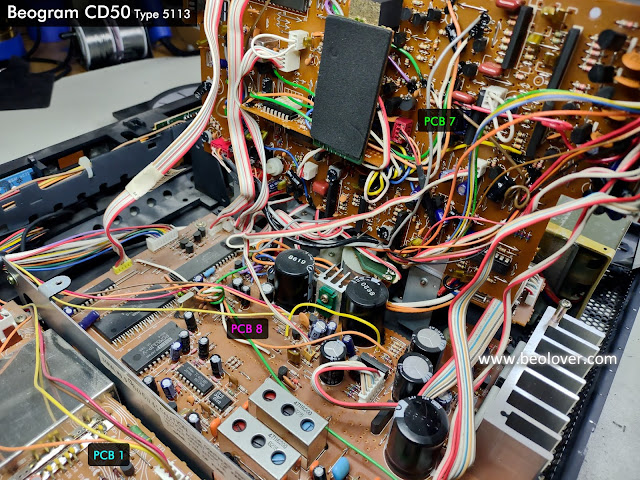 Starting with PCB 1...
Note: I removed the metal shield box from the processor IC to reveal the two electrolytic capacitors underneath. 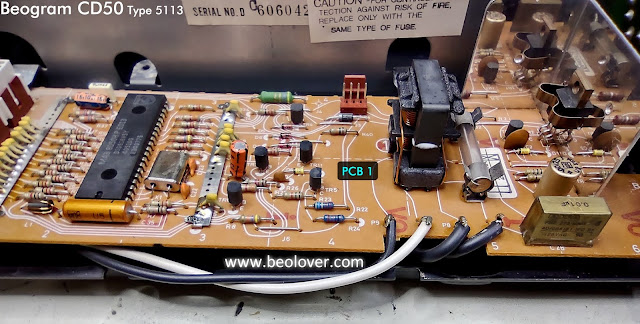 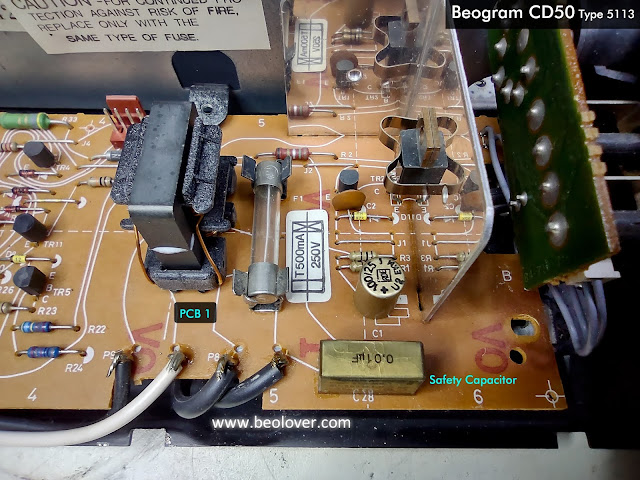 Starting with the the 1C1 100uF, 25V electrolytic capacitor I guess it was just good luck to try one that is out of tolerance right off the bat. 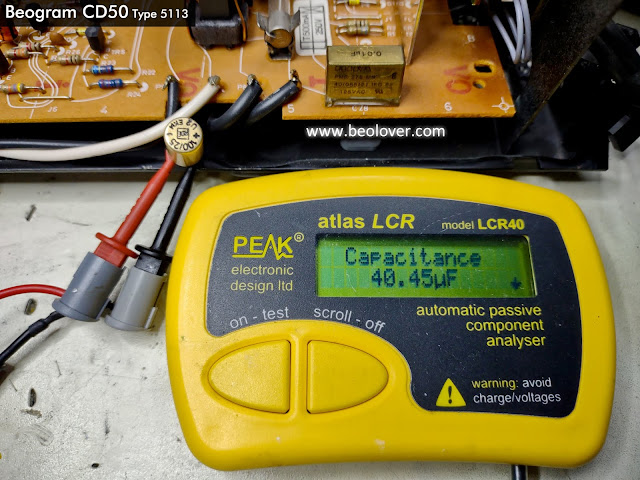 Definitely one to replace.
Right below it is the 1C28 safety capacitor. It isn't an electrolytic type capacitor but these capacitors are known to bust open when they fail and there are a few small crack lines in the device. It is better to go ahead and replace these now rather than wait for them to explode :-). 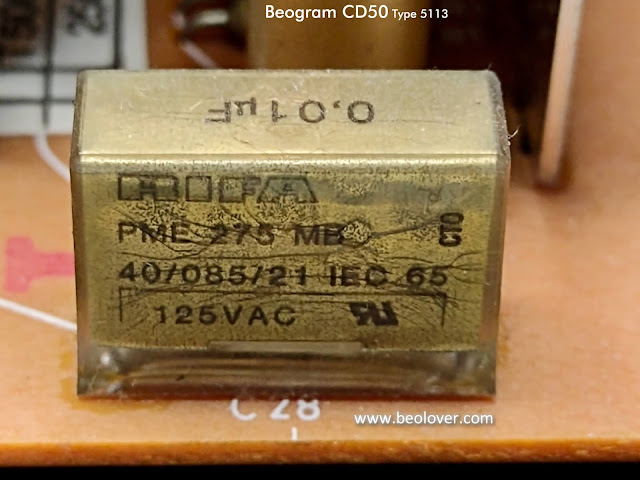 Here are the replacement capacitors installed. 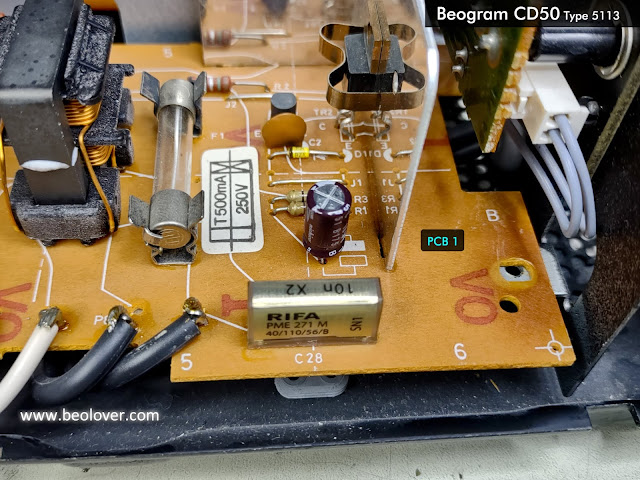 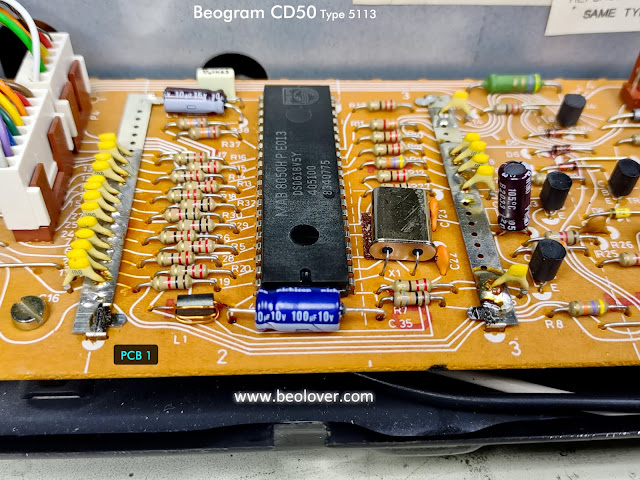 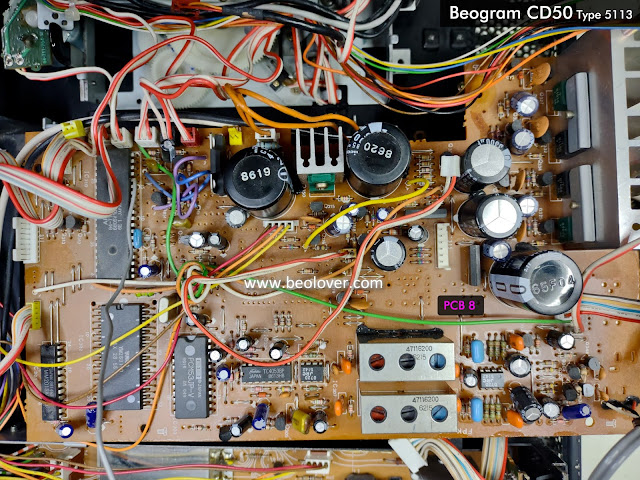 PCB 8 and PCB 7 have a lot of electrolytic capacitors.  I was prepared to replace all of them but it turned out that they were all still in spec. I did end up replacing all of the 100uF capacitors on PCB 8 like I did on PCB 1. The existing ones were in tolerance but a couple were far enough from the center value that I felt my new capacitors would be better to put in. Also, that way I know for certain those won't be a problem in the future. I also changed the 1000uF and 3300uF capacitors.  They also could have been left in place but I liked my replacement measurements better.

The rest of the capacitors on PCB 8 measured pretty much right on the specified value so I left them in. 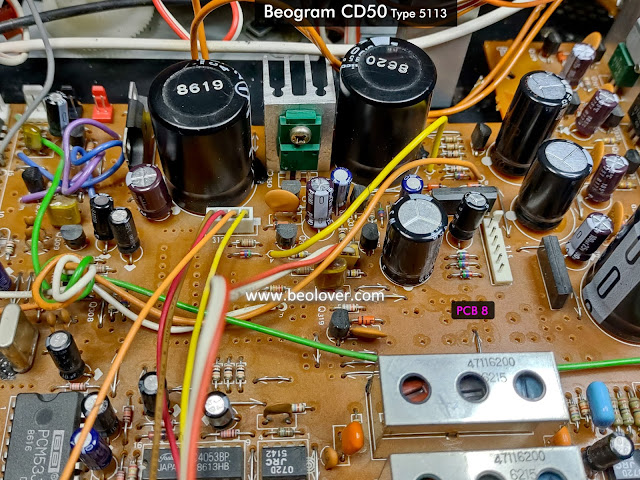 The last board I checked was PCB 7.
That board turned out to just be a capacitor value check only. All of the electrolytic capacitors measured really good. 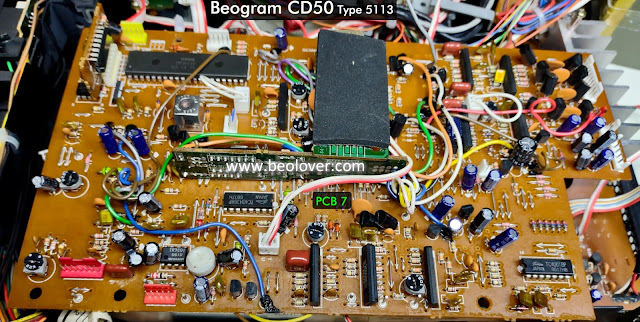 The next step is reassembly.
I took a lot of photos of the boards and their cabling when I was disassembling the CD50. That is something you should always do even if you know where all the parts go. You never know when you will want to go back and check exactly how things were connected before you started.

Here are the PCB 1, PCB 7 and PCB 8 boards connected back up. 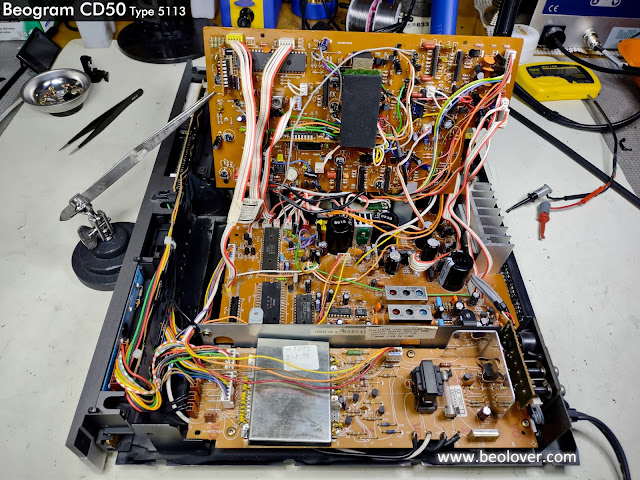 I plugged the CD50 in and the CD tray mechanism now works.
After that I loaded a CD and connected the CD50 DIN cable up to the workshop Beomaster 8000 that I keep open (and fully functional) on my workbench. 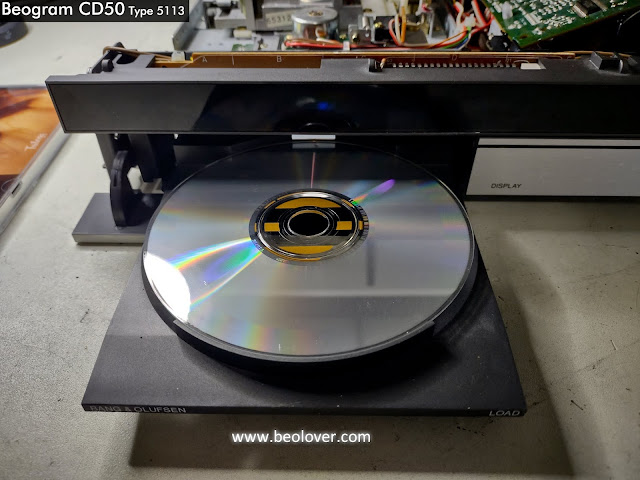 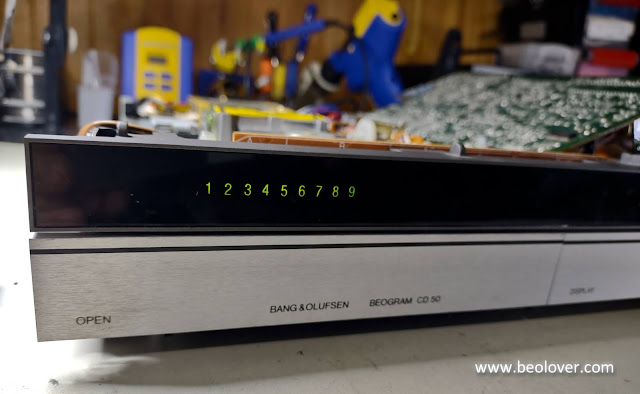 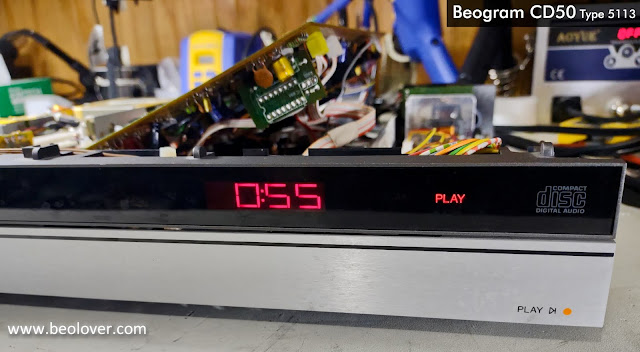 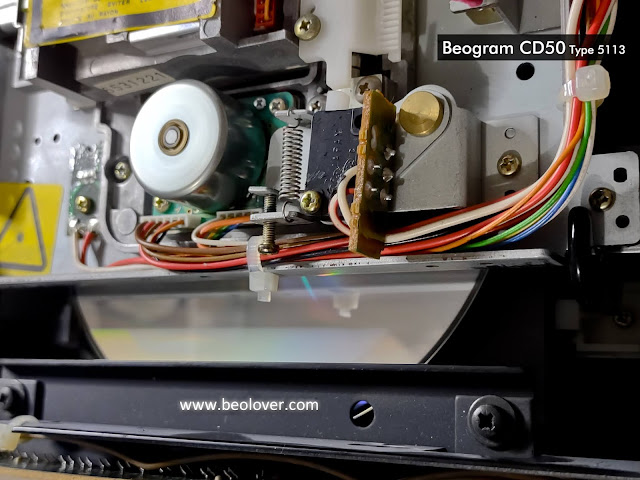 I let the CD50 play the entire CD.  It properly returned to standby mode after it was done.
It's always a great feeling to see a component perform correctly after a big reassembly task.

The next step is to check some voltages in the CD50 before moving it to a listening room and connecting it up to my Beomaster 5000.  Then I can make sure all of the remote control functionality works properly.
Posted by sonavoraudio at 1:17 PM