After a little over twenty-four hours running I stopped the Beogram and loaded the measurement logging data into my analysis software. The previous post yesterday showed that the Beolover RPM Measurment Tool logs a timestamp HH:MM:SS and an RPM measurement every ten seconds. Plotting this on a graph of RPM by time gives the following result. 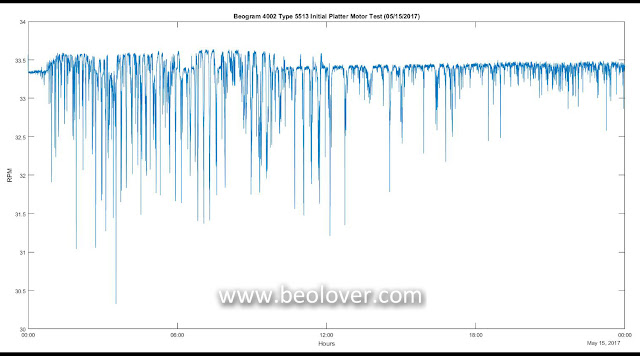 The top level speed for the selected 33 1/3 RPM turntable speed stayed pretty level but you can see quite a few dropouts down to a lowest speed value of 30.324 (at the three and a half hour mark).
Note that this result is consistent with measurements that Beolover typically gets on his initial testing for one of these motors.

Like Beolover's other Beogram DC motor tests, it will be interesting to see the result of this Beogram with a DC platter motor whose bearings have recently been re-impregnated with oil. I would also like to do that before doing any other restoration work on this Beogram so I can see the incremental effect each restoration task has on the motor stability.

Luckily I happen to have a spare Beogram 4002 motor that Beolover treated the bearings on already. So I'll install that motor in the Beogram and run the speed test again.
Posted by sonavoraudio at 10:33 PM