I thought this was fixed! But it wasn't! Last year I reported about a strange intermittent issue with a Beomaster 8000 that I was restoring: When switching the input to Phono it sometimes mixed in the tuner signal that both turntable signal and tuner signal were audible at the same time...a pretty useless situation. My investigation back then determined that there was a discontinuity around P82 on the uProcessor board, which occasionally caused the input switches on the preamp board to malfunction. P82 carries the control signals for the two electronic multiplexers that control which input is routed into the preamp-circuit of the Beomaster. I implemented a bunch of jumpers, shown here: 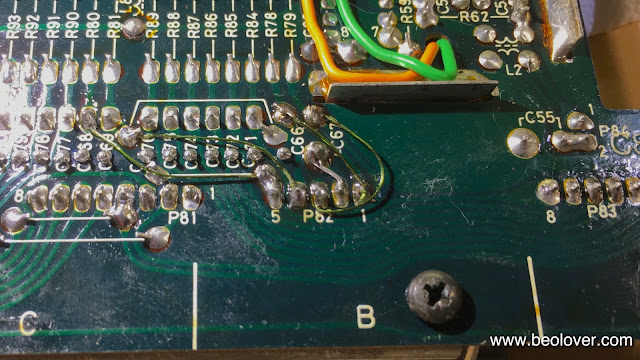 and the problem appeared to have gone away.

As it turned out recently, this was an illusion as the Beomaster again showed this issue when I tried to play a lovely 1950s vinyl by Cal Tjader of which I bought a significant number recently.

My initial thought was that maybe the ribbon cable that connects the input selector pins of the uProcessor to the preamp board had an issue, and so I ordered a custom manufactured 5-lead ribbon with appropriate 0.1" headers and put it in. Here is an impression of the end plugged into the uProcessor board: 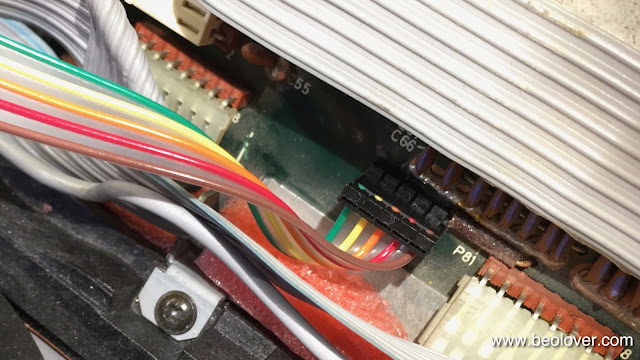 And a photo of the preamp end: 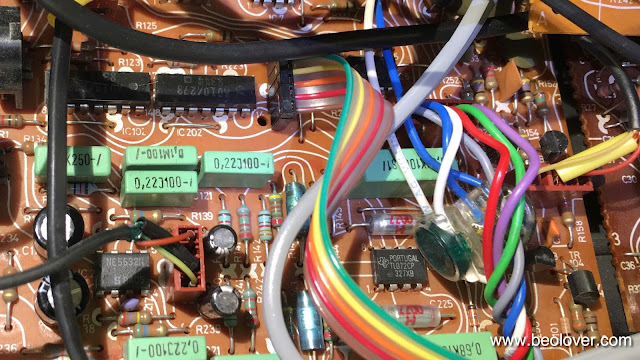 While this new cable made a great connection and looked very pretty, it did not cure the problem. But at least another potential root cause was ruled out.

Back to the bench it went. I opened it up (again) and wiggled P82, and there it was (again)...depending on the pressure on the brand new connector the input behaved correctly or malfunctioned. I took the board out and had a closer look. All the jumpers were in good shape, so the problem had to lie somewhere else. However, all the traces checked out o.k. (again) and so I was a bit at a loss.

I put the board back in and played the Beomaster for a while scratching my head. Then it occurred to me that such problems are often related to ground connection issues. I prepared a jumper cable from the preamp board to the uProcessor board. Then I induced the issue and subsequently made a separate ground connection between the boards with the jumper. And, eureka, the input out of a sudden behaved normally. With the jumper in place I was not able to produce the issue again. I took the board out again and inspected it more. And I finally understood how the grounding plane is setup on the uProcessor board. I realized that this board is actually a double sided PCB, even though it has no etched traces on the back side. However, they used the continuous Cu layer as a ground plane from which several connections are made through the board to the traces. This is hard to see since the surface just looks a uniform green and there is no obvious mention in the manual where they show the PCB layout. After this it became clear to me how the ground connection to the preamp board was made. This shows the pertinent part of the board: 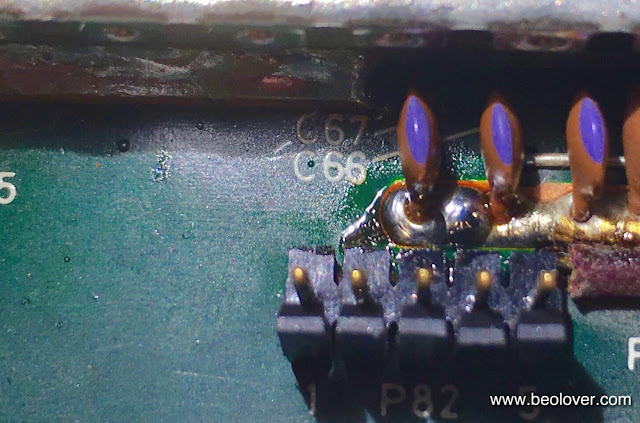 C67 connects through to the patterned side of the board and so makes the ground connection that connects to pin 2 of P82. The picture shown on top shows the backside of this area. I had soldered a jumper in from the C67 leg to Pin 2 of the header to bridge potential cracks in the trace connecting the two. What I did not consider was that the problem was rather caused by a 'cold' solder joint on the other side causing an intermittent contact. I resoldered the area and then the problem went away. Another demonstration that most control issues in the 8000 are caused by problematic solder joints on the uProcessor board.

Back to testing it for a bit longer, but I think it may finally be ready for its journey to its new owner in the UK.