It has been some time that I had to post something noteworthy of my B&O efforts. I guess this means that all my Beos are in a happily restored state. However, like with classic cars, one needs at least two of each no matter how perfectly restored they are. This showed last night when we indulged in one of the new Longmire episodes and suddenly in the middle of the show the Beomaster 8000 output died. A quick on/off cycle indicated that the ramp up relays on the main transformer did not switch anymore: The Beomaster was quiet like a lamb, but still turned the display on and off in an orderly way. This suggested that there was an issue with the communication between the microcontrollers and the relays. I switched out the Beomaster with one of my other units and we continued watching.

Today I opened the Beomaster up. After plugging it in and turning it on, the relays clicked like never anything happened. An intermittent problem...don't we love them?? Well, on the other hand this suggested immediately that there was a simple contact issue somewhere in the path between the responsible microcontroller (IC4) and Relay 2 on board 7. I slightly bent the microcontroller board back and forth, and promptly the relays cut out again. I followed the path from the plug to the microcontroller with my multimeter (IC4 pin #16 should pull the line to the relays down to ground when the Beomaster 8000 is on). What I found was that the via that connects the trace from pin #16 through the board right above the pin of the microcontroller had become an intermittent contact. The photo shows the three vias (in the center of the pic between "9" and "C97"). Please, note that getting there requires removal of the bottom part of the shield can that limits the RF emissions from the processors - this can be done by carefully inserting a screw driver in various positions around the can and turning its blade, thereby prying the lid off without bending it. 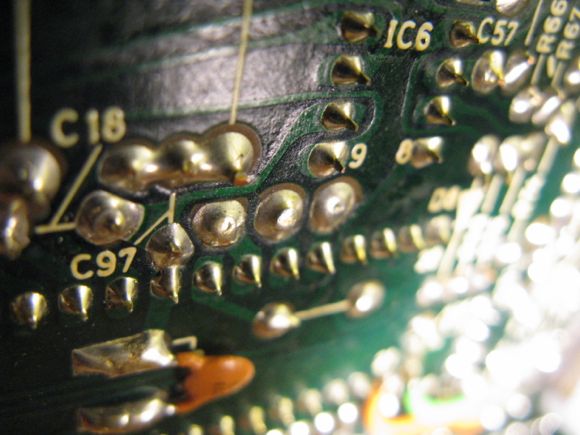 I had a similar problem before with the first Beomaster 8000 I restored. That one would out of a sudden go into stand-by, and not wake up anymore. In that case the pin #14 via was the culprit. I think the lesson here is that a complete restoration of a Beomaster 8000 should include the preventive measure of resoldering these vias.

Fixing was quick: I put small dabs of flux paste on the vias and then simply heated them until liquid with my soldering iron (at 380C). This restored the Beomaster to its original reliability and it is now happily back in our living room.