Here we go again. My second Beomaster 8000 lived happy in the living room for about 8 months. We used it everyday, and it performed like new. After all, it had a full recap and restoration and also looks basically like new! Well, now it sat on the bench again. The issue: When cranking it up above 2.9 the left channel suddenly cut out, while the right one behaved normally. I swapped it out with BM8000 #1 and we partied on on that afternoon. It is like with classic cars: You need at least two if you want continuous service...;-). Today I opened it up. The problem was quickly identified:

The volume is digitally adjusted via a 6 bit attenuator made by Analog Devices. This AD7110 chip is able to attenuate the input signal in 1.5 dB steps based on a 6 bit digital input. This gives it 64 attenuation steps, which would amount to a total of 96 dB attenuation. However, the design of the chip assigned the highest four numbers (1111XX) to an infinite attenuation. With 000000 being fully open, this gives us an attenuation range of 88.5 dB in 59 steps. This explains the 0.0-6.0 volume scale of the Beomaster 8000. The beauty of this design is that the volume display directly correlates to the binary information sent to the chip. Each ±0.1 step corresponds to a ±1 change of the binary number sent to the chip. Form follows function!

Knowing the above, the fact that the volume cut out at 2.9 immediately suggests that the most significant bit (MSB) of the 6 bit data bus was not connected anymore. A glance on the circuit diagram of board 4 shows that pin 3 (the MSB) is pulled up with a 220 Ohm resistor to 5V. According to the circuit description this is a precaution to prevent the AD7110 from opening up fully if the data bus is disconnected. In this case MSB would be set to 1 through the resistor, effectively causing an attenuation of 48 dB, preventing potentially disastrous effects should a speaker be connected in this circumstance. I concluded that the MSB must have gone open circuit, resulting in a permanent MSB=1 setting due to the resistor. Hence, after passing from 2.9 to 3.0 the attenuation reverted back to 88.5 dB. In presence of the right channel blasting loudly, this appeared as a complete loss of the left channel. In fact, after disconnecting the right speaker, the volume on the left channel recovered to the 3.0-equivalent level when increasing the volume from 3.0 to 6.0, confirming the hypothesis.

The problem was easily fixed by cleaning the pin header contacts at the left channel AD7110. The location of the chip is shown here: 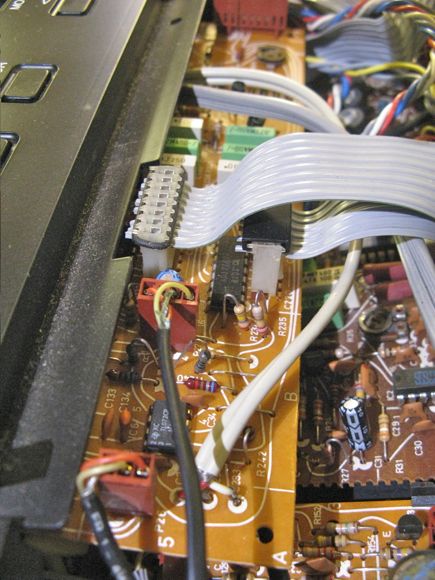 The two ribbon cables connect directly to the AD7110 for each channel. The right plug is next to the AD7110 regulating the left channel. This picture shows the chip and the 6 headers connected to the bus pins of the chip: 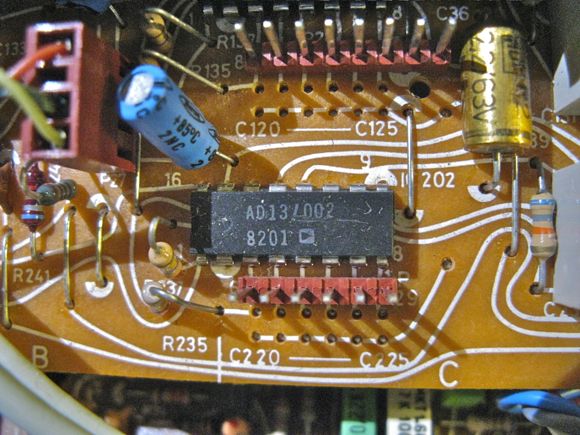 It is strange that the chip is not labeled AD7110, but rather AD13/002 8201. But the pinout seems to be exactly that of the AD7110. Anyway, after cleaning the pins of the header (I also bent them a bit alternatingly up and down to increase the tension in the female connector), everything was fine, and the Beomaster is back in the living room!
It is interesting to note that this chip was apparently $10 in 1981(see Analog Dialogue 14(2), pp. 7, 1980 - http://www.analog.com/library/analogdialogue/cd/vol14n2.pdf) if purchased in the "100s", i.e. a single chip would have run about $20. Adjusting for inflation this corresponds to maybe $50 in todays dollars. This helps explaining why these Beomasters were quite expensive back then (but also quite advanced for the time!).