I was just about getting bored about Beomaster 8000 #4...it seemed it only had 'standard issues', which is nice as a soldering exercise, but nothing beats the 'detecting' if there is a new previously unknown problem! After fixing the displays and the output stages everything seemed great, until I turned on the tuner. While the frequency rotary encoder properly dialed in the desired frequency, the tuner itself did not really care about this setting. Basically, all I got was white noise no matter what frequency I selected. Oh well...a quick measurement of the tuning voltage yielded that it was either at the low end or at the high end but never in between...then after some playing around I noticed that when I set the freq close to 91.7 MHz I could hear some radio stations 'zooming' through.

Strange! Monitoring the tuning voltage showed that if I set the freq slightly above 91.7 the tuner would more slowly ramp the freq to 108 MHz, and when I set the freq slightly below 91.7 it would reverse course and go down to 87 MHz. In fact, after a while I was able to actually dial in stations with some stability by just very slightly changing the frequency above and below 91.7 and thereby driving the tuner slowly up or down.

Reading the "Product Description" about the tuning mechanism revealed that the microprocessor rams the tuning voltage up or down depending on whether the dialed in frequency is higher or lower than the actual tuner frequency. This is used to stabilize the tuner, but also to change the frequency. Such a mechanism requires feedback. In this case this feedback is provided from the tuner board via plug P84 to the u-controller board (#9). Here is the relevant circuit:

The orange tags are my measurement points (see below). After the transformer L2 the signal ( arrives at the preamplifier input of the prescaler chip U264B. I do not have a fast enough oscilloscope for a proper 100MHz measurement, but by 50MHz Rigol gave me a blurry 10mV sine wave at Pt.1. A better way to detect the presence of the signal was to use a signal analyzer. I hooked its 50 Ohm input up via a 10x oscilloscope probe to reduce the load on the signal. This is what I got: 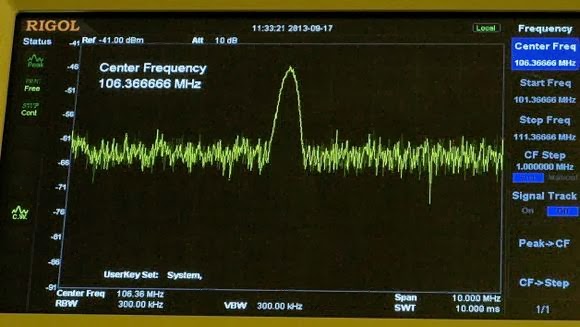 The U264B chip is necessary to divide the 100MHz range tuning frequency down to something the slow 2 MHz microprocessor (IC4) can actually count. It also amplifies the signal with its preamplifier. After the 1/64 prescaler the frequency is in the 1.5MHz range. This signal comes out at pin 7 of the U264B (Pt.2). This signal now has a ~600mV amplitude, but a ~4.3V offset. Here is a oscilloscope shot measured on fully functioning Beomaster 8000 #2 (on the presently open Beomaster #4 this signal was absent suggesting that the U264B is fried. Judging from the above described behavior it also suggests that IC4 is programmed to 'think' that an absent frequency feedback signal represents 91.7 MHz): 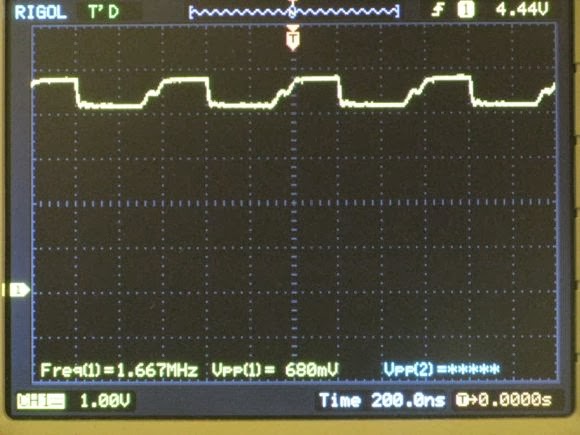 The PNP transistor TR5 has its emitter hooked up to 5V, i.e. the 4.3 to 5V output signal of the U264B is able to turn this transistor on and off. This results in an amplification of the signal at the collector of TR5, and now we have a standard 5V square wave signal, perfect for the flipflop CD4013. Here is an oscilloscope shot from the collector: 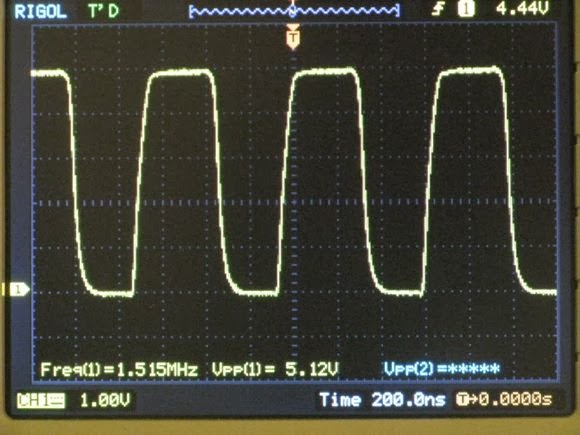 This signal is fed into the flipflops in the CD4013, which are in series to affect a further 4x reduction of the frequency, i.e. now the signal is about 400kHz. This is how the CD4013 output looks like: 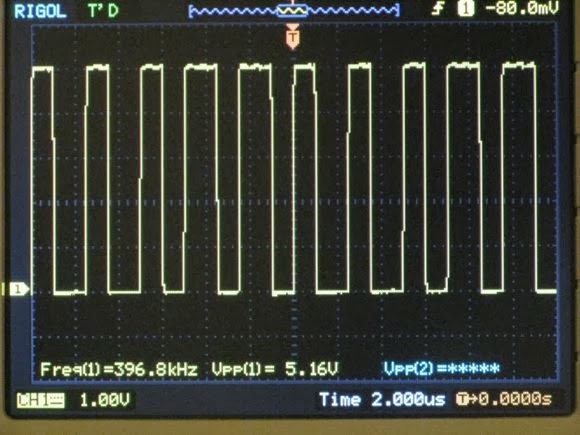 This is the signal that is sent to pin 21 of IC4, the frequency counter feedback input.
Now I am waiting for some NOS U264B chips from Germany where someone is selling off his hobby kit. Lucky me! I will report back once I put in a new chip. I hope this will fix it.