I bought a 4th Beomaster 8000 recently on ebay. It was listed with the usual "nothing happens when I plug it in, probably the fuse needs replacement" statements, which deterred many bidders, i.e. I got it fairly cheap. Externally it is pretty good, making it a worthwhile (my wife appears to have a different definition of 'worthwhile'...;-) project.

Today I finally got around to looking into it. A first look at the fuses on board 7 indeed revealed a blown 10A fuse (F2). F3 was o.k. This immediately suggested that probably one of the output stages burned out due to a non-contact quiet current trimmer.

I opened the Beomaster up and disconnected the power to the output amplifiers (red and black leads that connect to the boards via tabs) securing the plugs with some tape to prevent them from making accidental contact when the power is on. Then I replaced the fuse with the proper 10A quick acting type and plugged the Beomaster in. A good sign: the decimal point LED in the volume display came on, while nothing else happened.

Then I tapped one of the radio preset buttons. The Beomaster came alive, but showed strange displays: 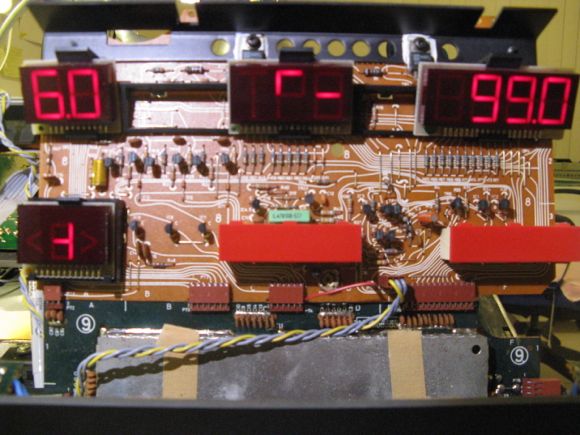 The volume came on at 6.0, i.e. full throttle. I reset it to 2.0 with the volume store button, which seemed to work with the usual blinking of the display during the storing process. We will see if this fix is permanent or if there is some problem. The frequency display showed a local station, i.e. the radio might be o.k. Turning the rotary encoders showed that these two displays are o.k. w/o missing segments...a rarity. The other two displays showed garbage. Usually one would think that some segments are dead. However the perfect performance of the other two displays suggests that there is a deeper lying problem needing further investigation. Let the fun begin!
Posted by beolover at 10:47 PM