Today I checked out the output stages of my 4th Beomaster 8000. The blown fuse indicated some trouble there. Indeed a visual inspection of the two output amps revealed two darkened R236/7 power resistors, a telltale sign that the output burned out at some point. The right channel seemed to look pristine. I removed the heat sinks with the output transistors. 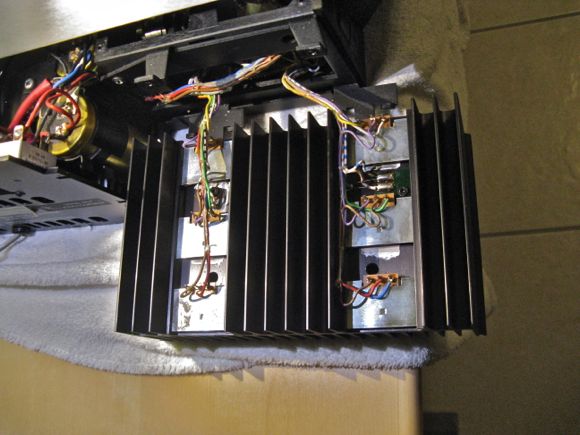 To make sure I used my multimeter to measure the resistances in the 6 output transistors of both channels. 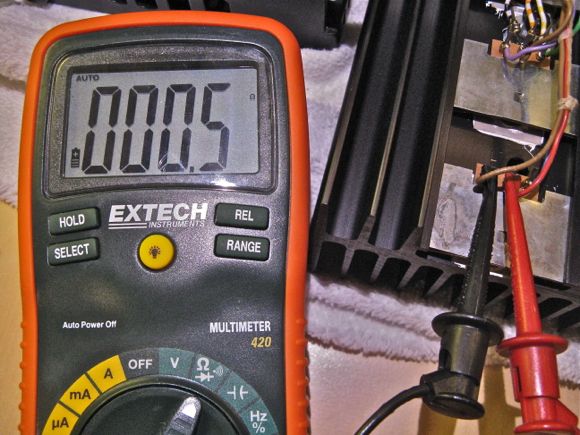 On the right I measured high resistance values (several 100k) in the emitter-collector circuit, while on the left the resistance was less than 1 Ohm, indicating a full short circuit between the power rails.

Next I rebuilt the left output board with new electrolytic caps and a 11 turn 100Ohm trimmer for the quiet current adjustment (see post http://beolover.blogspot.com/2011/09/output-stages-testrecap.html for details on this procedure). Then I replaced the 6 output transistors (3x TIP141 and 3x TIP146). This is one of the more painful Beomaster 8000 repair procedures since one needs to extract the old transistors and then squeeze the new ones in under the springs with some heat sink compound, which always turns into a mess. I recommend to use vinyl gloves for that. Here are the dead transistors after extraction: 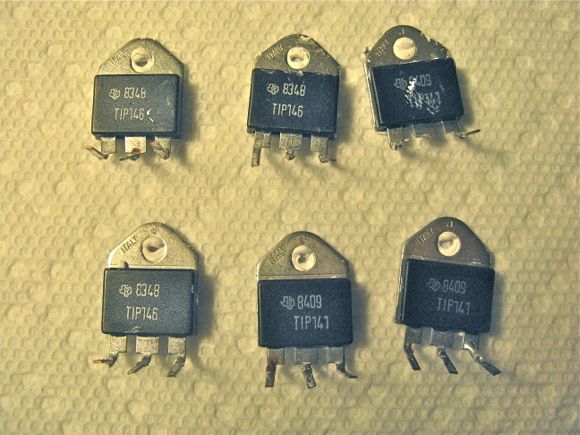 Interesting to see that they were made in Italy...the good old days. The new ones that went in were from Malaysia.
The next step was firing up the left channel with bench power supplies (see again http://beolover.blogspot.com/2011/09/output-stages-testrecap.html for details). By the way, there is no problem with first turning up the +15V supply, and then slowly ramping the ±54 supplies to their max voltage, while watching the current (I usually keep the current limiters on the supplies close to turnoff to make sure that nothing adverse happens during this test)

The currents into the board (at 18mV across R236/7) were a bit higher this time:

Not sure why this difference...at any rate it seems the output is working again properly. After 30min the temperature on the heat sink was just slightly above ambient...like it should be.
Posted by beolover at 1:16 AM