I finally had some time to get back to the Beomaster 8000. All that was left is to rebuild the display boards with SMD LEDs and to fix the keyboard (the TP2 button only worked intermittently, and that is the important button in the days of the iPhone as it allows to select the only input not used for its magnificent siblings, the Beocord 9000 and the Beogram 8000). Anyway, here a few pictures from my latest display repair process. I posted several times about displays in recent months, and if you care to pull them up, you can clearly see my progress in this matter. Here now, what I finally consider an acceptable solution to this fairly tricky issue with these units:

I used the same process to remove the red covers and white 'light conduits' (for lack of a better word) that I discussed earlier (I basically cut off the small plastic discs at the bottom of the PCBs with a scalpel, which immediately allows to remove the covers). Here a picture of the frequency display board after scraping the old LEDs off: 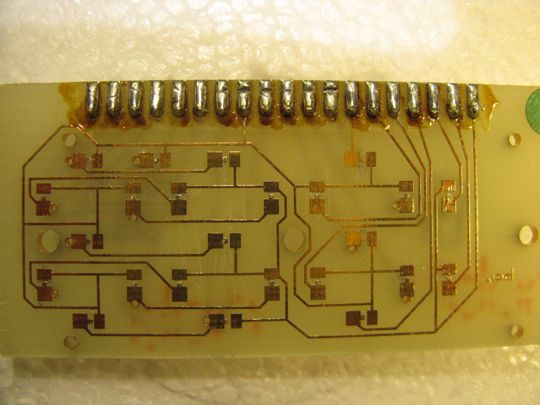 This picture shows the input selector board. Compared to the first two Beomaster 8000s that I refurbished this one shows a soldermask (green). Another 'advance' of this board generation is that the solder pads are now coated with another metal. Unfortunately, this metal coating did not survive the test of time too well, and it flaked off in several places when I removed the old LEDs. This is shown in the detail shot below. 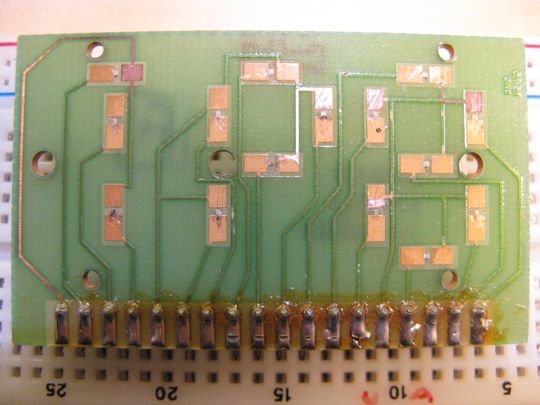 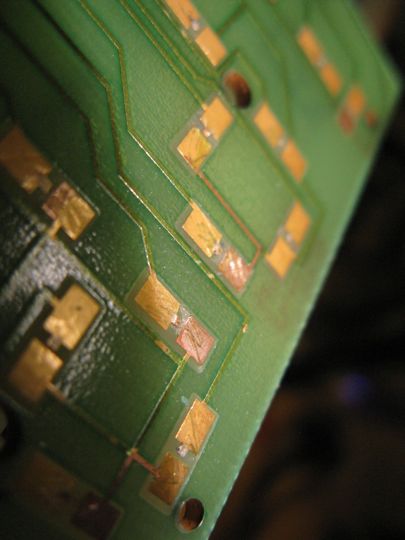 I scraped the flaking parts off as good as possible to create a stable surface to attach the SMD LEDs to.

Here some pictures of the boards with soldered LEDs: 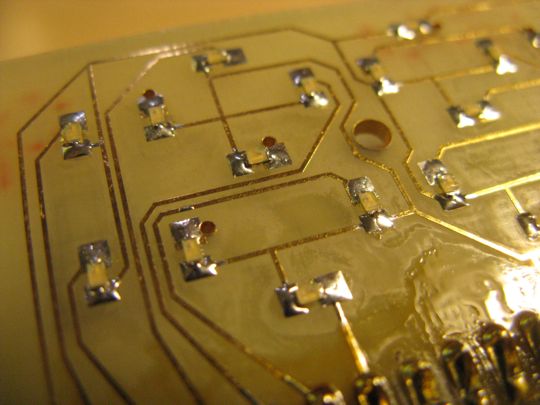 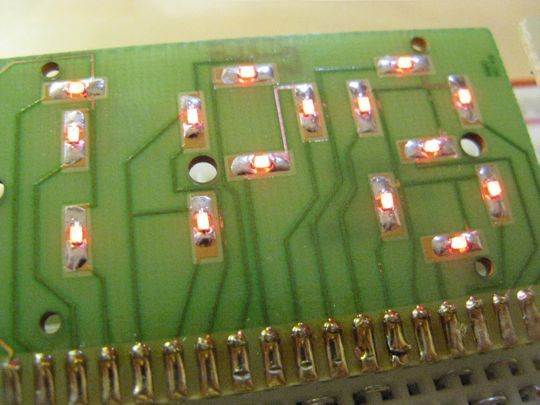 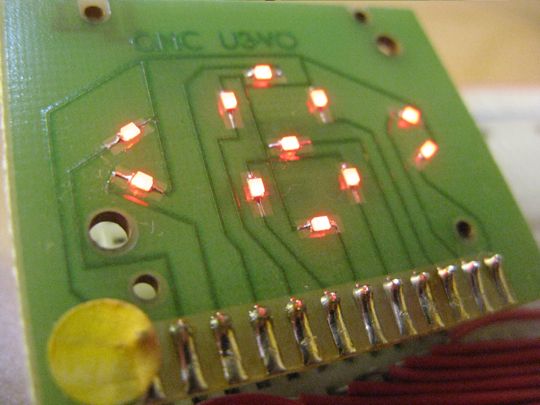 Nothing really new here, except that practicing improves skill...;-). I used MG Chemicals No Clean Flux Paste (8341-10ML) and standard Kester .4 mm solder wire (SN63PB37 #66/44). While it says "no clean" these boards defintely should be cleaned from residue in an Ethanol bath.

Now to the assembly process. This is the part of the process that did not satisfy me when I refurbished the first two Beomaster 8000s. Since there is no other way to get into the displays than to cut off the plastic discs that hold the red covers in place, the reverse process needs to inadvertently involve some kind of glue. Since I wanted to be sure that I could open the displays another time in case some of my solder joints would fail etc...I previously elected to attach the covers with Scotch tape. However, this did not look pretty enough in my opinion.
Another issue is that the 'light conduits' need to sit tightly on the PCB to eliminate optical crosstalk between individual LEDs. This is especially annoying when the Beomaster is off in a dark room. In this situation the single lit standby LED has a halo in the adjacent LED segments if the light conduit is not attached perfectly (o.k. I admit here that this type of concern is a sign of a severe B&O addiction, but what can one do??)
Here is what I cam up with for this set of displays:
This picture shows the light conduit of the volume display in place with a skirt of 5% window tint foil applied to stop light emission into the display-surrounding space 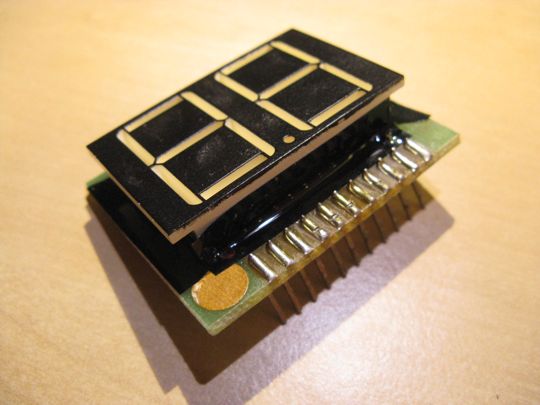 Seating the red cover squeezes the foil into place forming a tight light seal around the display block: 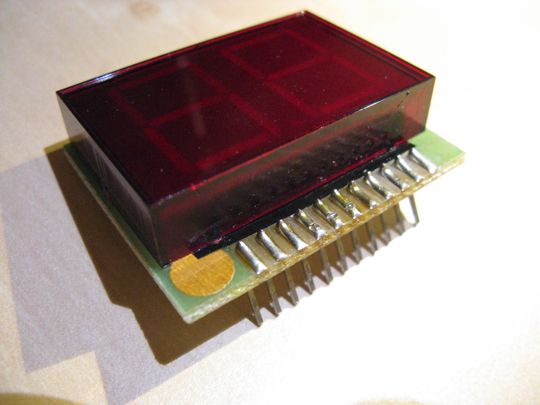 The last part of the process is to somehow fix the cover in place. Instead of taping it, this time I put dabs of super glue gel on the tabs of the covers where they emerge on the bottom side of the PCB. Then I put small squares of transparency foil on these glue areas. this has the effect that the glue is squeezed a bit into the surrounding space, similar to the plastic discs that I had to cut off to remove the covers. This is shown here: 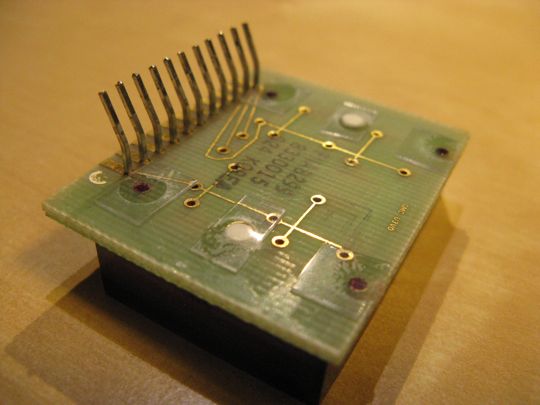 Once assembled I pressed the entire thing together between two thick cardboard pieces using two carpenter's clamps as shown here: 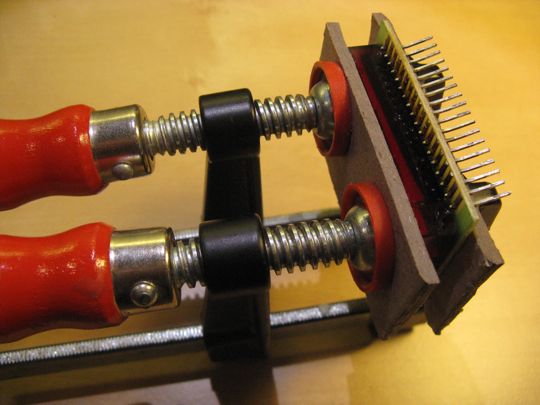 After about 2 hours I removed the clamps and the displays were ready. Here some shots when I ran them on the breadboard set-up for a final test before reinstalling them in the Beomaster 8000: 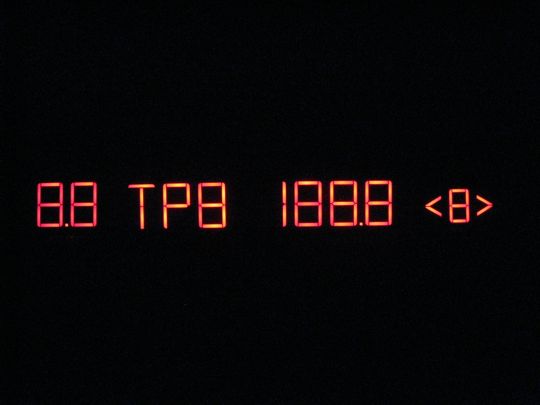 Note the absolute darkness around the displays...no more halos. I should add that I also blackened the backs of the PCBs to stop light emission there, too.

After testing for 24 hrs I reinstalled the displays in the Beomaster. Before reinstallation I adjusted the display voltage to reduce the intensity to a level similar to the original displays like I described earlier here:

This is a nice and fast method to get the intensity right without having to change all the current limiting resistors of the LEDs.

On to the keyboard!