I declared 'mission accomplished' after restoring a Beogram 8000 recently, and I sent it back. After about 2 weeks I received an email describing some strange behavior, where it would shut down during play, but sometimes only very briefly and then start up again etc...
The Beogram was sent back to me and I had a look. First I was not able to reproduce the issue, and after playing more than 20 albums, desperation set in. So I gave it a bit of impatient rapid play and stop and other buttons, hoping to provoke a reaction. And after a while, indeed, it gave me a signal. The display showed this after it returned home after pressing STOP: 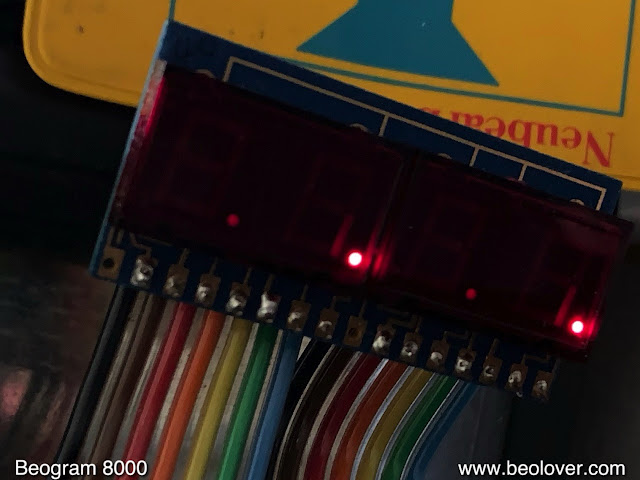 The dot on the right should not be on! This encouraged me to continue pressing buttons and I got this: 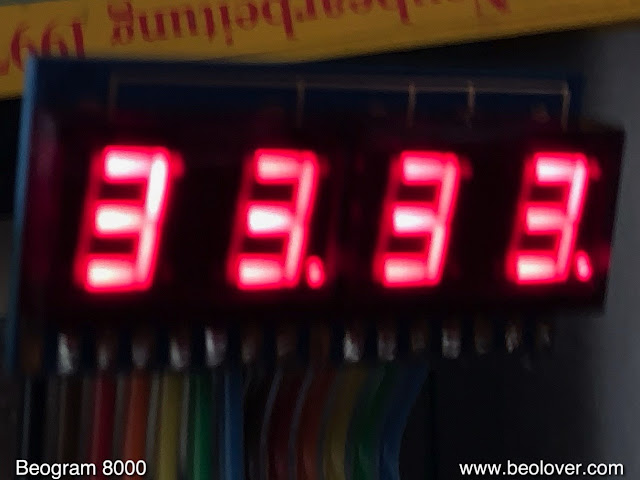 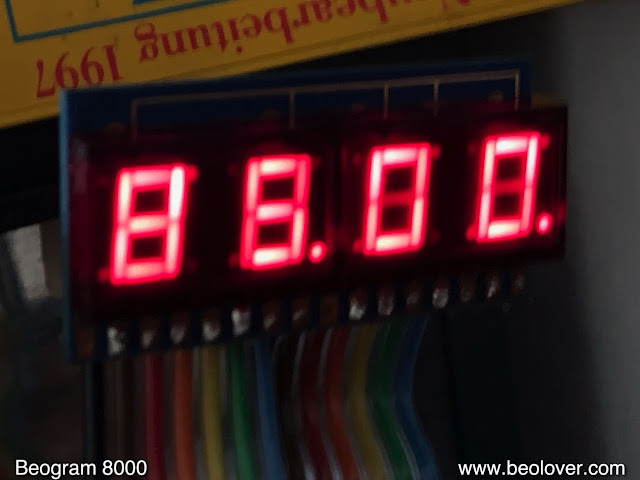 After each of these display readings I was only able to go back to normal after pulling the power plug and reconnecting. I continued working it for a while, and finally I got it to loose power briefly, and then it came back on. So I started thinking there must be a problem with the 5V supply. The 800x often has power issues, but mostly due to bad capacitors or bad solder joints on the headers that connect to the transformer block. Of course I already had re-soldered these headers and installed new capacitors, i.e. these standard root causes could be ruled out.

Since the issue seemed to be based on very brief outages or brown-outs that confused the processor, I needed to find a way to monitor circuit nodes for brief voltage dips while playing with the buttons. I decided to use the external interrupt pins (2 and 3) of an Arduino nano board, which I outfitted with a npn transistor and a 20k resistor on one pin to be able to sense higher than 5V signals, so I could also go between the transformer and the 5V regulator. After the 5V regulator the voltage is stabilized, i.e. Arduino pins can directly be connected. LEDs were used to signal power drops on each pins. This shows the board: 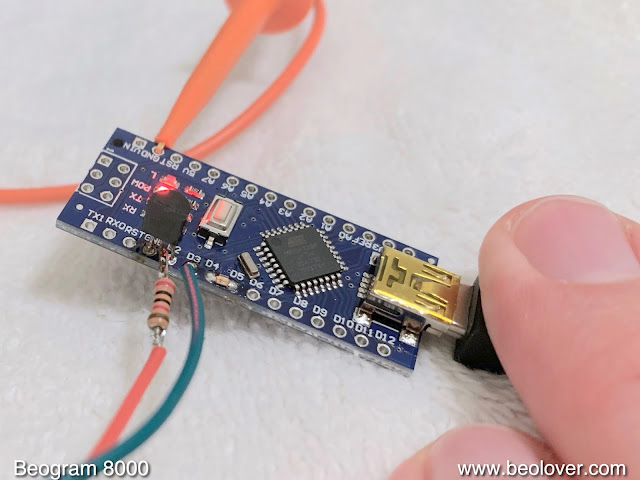 First, I connected the two pins to the green marked nodes in the circuit diagram to test if the 5V chain was interrupted between regulator and the plug that connects to the micro controller can:

After I was able to produce another failure the Arduino told me that on both green points the voltage briefly dropped to zero. This verified my power outage hypothesis, but did not show me where it occurred. Suspecting a bad regulator, I connected the transistor-buffered lead to the red marked spot right at the transformer-facing side of the fuse holder.
I played the buttons again, and again, and after a long time, I was still not able to reproduce the problem anymore, while before it took me always less than 5 min! This indicated to me that I might have had accidentally fixed the issue when soldering the test lead to the solder spot on the board: 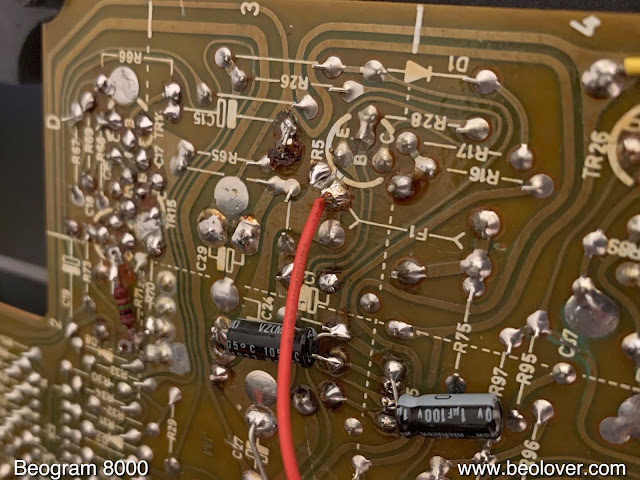 It turned out that this solder spot serves to connect a black jumper wire between the fuse holder and the 5V rectifier: 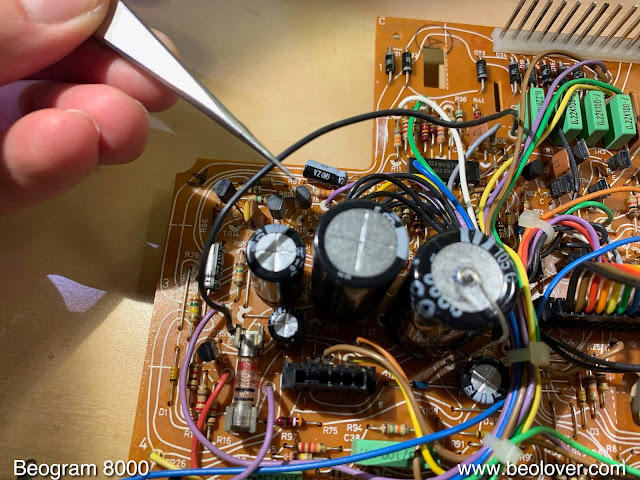 So I suspected that the wire had a bad connection, and re-soldering the solder point while tacking on the measurement jumper accidentally fixed the problem. I replaced the back jumper with a new one, and had a closer look at the connector: 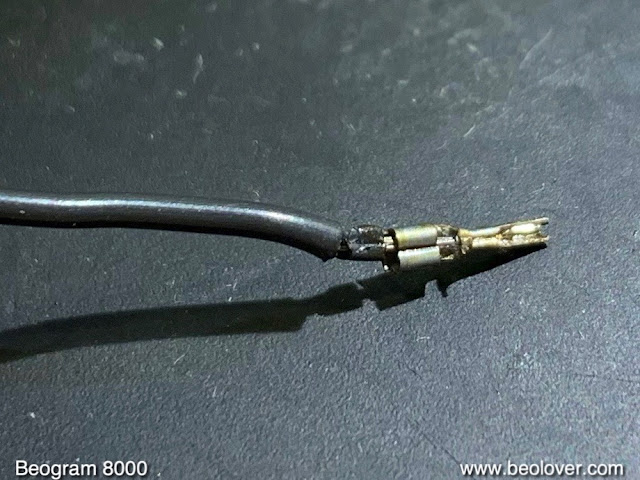 Indeed, the wire had pulled out a bit from the solder terminal, but was now soldered to the terminal. I suspect that some of the solder I put on the point during attaching my Arduino jumper managed to go inside the terminal, which fixed the intermittent contact.
Therefore, in conclusion, I think that the wire was loose, but still stuck inside the solder terminal, and the intermittence of the 5V supply was caused by vibrations when I pressed the buttons in quick succession etc...I will play it for some longer, but I am pretty confident that this problem may have been fixed with the new wire.