My recently developed BeoloverRPM device determines the measured RPM via the time it takes between the 'ribs' on the platter to cross the sensor field of vision. It is simple math to determine the RPM from that, and I was pretty confident that my measured absolute RPM numbers were accurate. However, there is always the possibility of human error, and so I was itching to test the BeoloverRPM on a microprocessor controlled Beogram 8002, which should have a very good RPM accuracy and stability.
So the Beogram 8002 that I just resurrected was in the 'right place at the right time' for this! I used my most recent version of the BeoloverRPM that can be set up on top of the aluminum plates, i.e. the Beogram does not need to be put into service position for a RPM measurement. I did two measurements, for 33.33 RPM 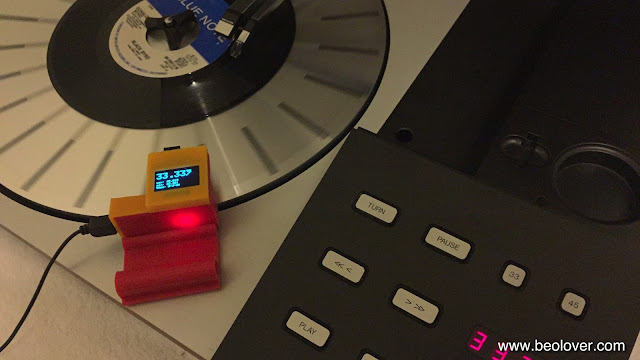 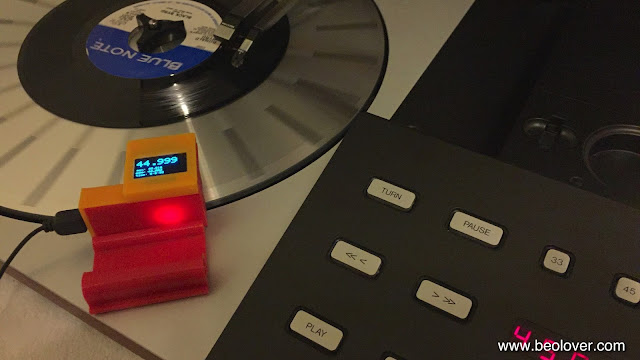 I measured a RPM performance curve for a few minutes while having my 7" test single (Donald Byrd: Black Byrd) on it. This graph shows the curve in comparison with a DC motor Beogram 4002 (5513) in perfect condition: 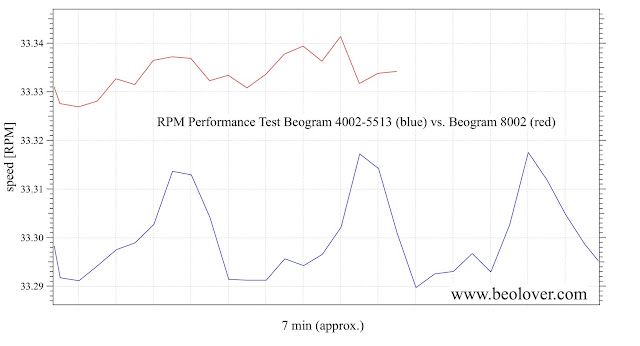 The red curve on top was measured on the Beogram 8002, while the blue curve below represents the performance of the 4002. We see that both units have a periodicity in their RPM, but the 8002 has a noticeably smaller variation than the 4002. The periodicity itself is unavoidable in a feedback-based control system since a PID mechanism needs some change to be able to operate. The art of designing such systems is to get the change as small as possible, while still being able to run the mechanism in a stable way.
But we clearly see here that a microcontroller based feedback system is superior to an analog system that depends on temperature, component tolerances and probably the moon phase (that was a joke...;-). In practical terms this difference is probably not perceivable by a human ear, but the 8002 definitely represents progress. I am curious to see how the AC motor Beograms perform in comparison...stay tuned for the next episode of this exciting unfolding story...;-)