I received another Beomaster 8000 this week. Let the fun begin! I was told that the heat sink would quickly get hot and automatic shutdown would occur after a few minutes. So when I got it the first thing was to check the main fuse (which was o.k.), and then open it up. The two output boards (#5) looked normal, but the right channel showed slightly browned R236/7 resistors, a telltale sign for a  troubled quiescent current adjustment trimmer (R226).
Here is the right and the left channel before rebuilding: 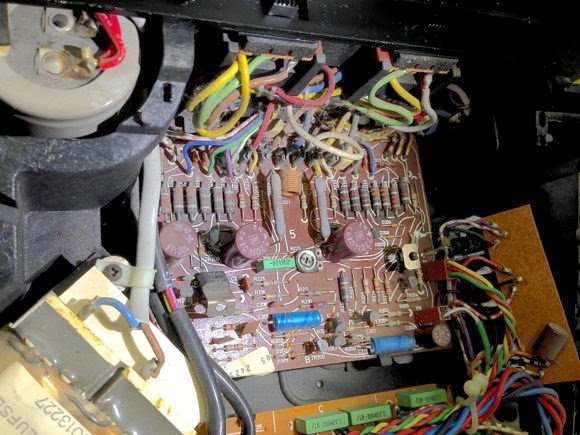 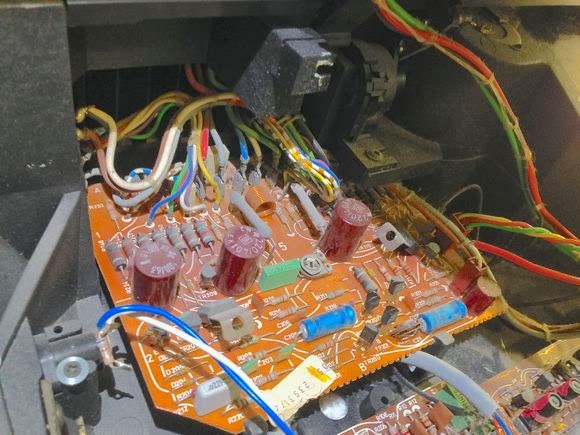 So the first order of business was to rebuild the two boards. I always do both, since these trimmers are always corroded and in danger of going open circuit, which causes immediate burn-out of the Darlingtons. I replaced the trimmers with 12x precision encapsulated trimmers, which give a much better current stability over time. The caps are 105C 2000hrs types...these boards get a bit warm during operation...
Here are the boards after refurbishing: 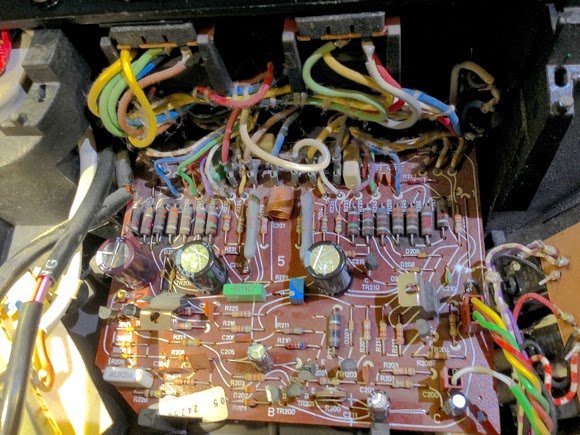 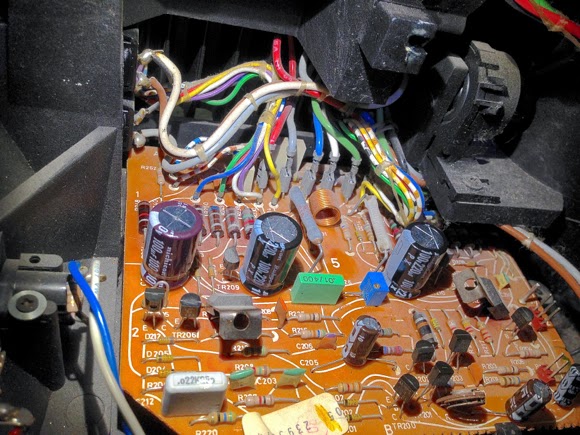 After this procedure, I usually start the boards up with current limited bench power supplies to ensure that no dramatic events occur. Here is the right board with the power jumpers. When doing so it is important not to forget to also apply 15V to the constant current source (TR208/211), otherwise the output does not open up. 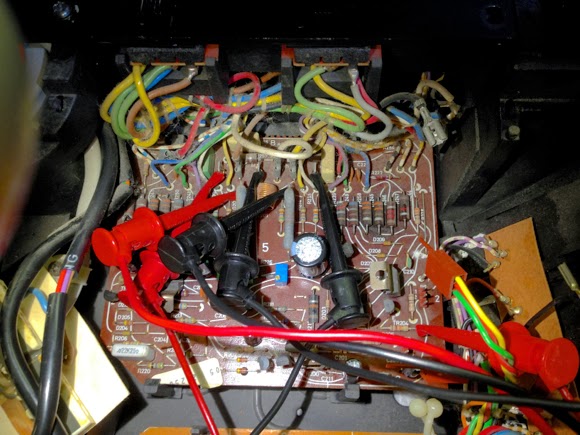 I did this first for the left channel, and I got the characteristic 100mA per voltage rail after adjusting the quiescent current to the prescribed 18mV reading at test points TP 200/201, which showed that the amp was working properly.
On the right side I did the same, and it almost behaved like the left channel. However, after a few turns of the trimmer, I was not able to exceed ~14mV between TP200 and 201. Even when completely maxing out the trimmer (100Ohm), this value would not budge. Under normal circumstances, the current would dramatically increase when exceeding about 35 Ohms.
Something was wrong on the right side!
The question was what! I poked around and measured the DC grid around the Darlingtons. I found that the voltages around IC205 were much too low: -1.4V on the emitter (should be -21V), -2.8 on the base (spec: -22.2V), and -2.1 (spec: -38.8V) on the collector. Very strange! I initially suspected that IC205 was damaged, and removed the cooling tower, and the heat sink. Then I checked the ICs with the component tester of my trusted Fluke 97. Both IC205 and IC206 looked pretty normal, i.e. they showed tentative diode curves between all pins. I thought at that point that they might be o.k. after all. But something was wrong as the low voltages around 205 suggested.
Strange! I removed the left channel heat sink and did the same measurements. And indeed both IC205 and 206 looked somewhat different on that side, but still like diodes....not very conclusive. I suspected a problem with the measurement, since the components were connected to the circuit around them.
I decided to replace 205 with a pristine TIP146. I ramped the power supplies up, and nothing had changed...this meant that 205 was o.k. So I put the wires back on the original one, and replaced 206.
Here is a pic with the temporary 206 replacement (note the TI logo on the chip - NOS from ebay!!): 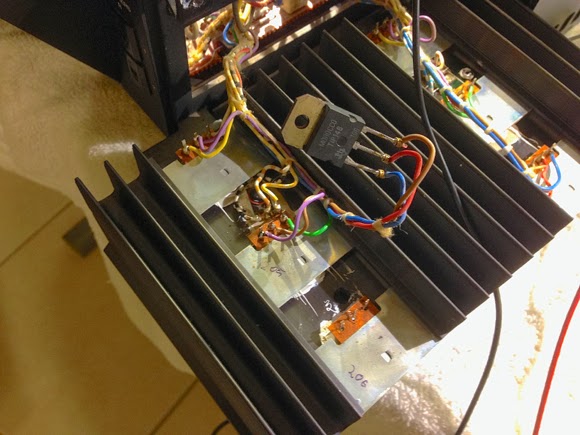 This fixed the problem. All the voltages around 205 were restored. I checked the original TIP146 after removing the wires, and it turned out that CE was completely open circuit. This explains the low voltages around 205. If 206 is off, this drives the voltages around 205 up towards ground. This is the first time that I experienced an OC Darlington in a Beomaster 8000. Usually it seems they just burn out and go completely conductive through CE, which usually causes the fuse to blow.
Anyway...Enough for today! Next step is an orderly replacement of 206 and then some more testing.