Beomaster 6000 Display Repair - Practice Does It!

I decided that I also needed to put new LEDs into the input/program selector display of my Beomaster 6000 to make both displays appear exactly the same. There is a very slight color difference between the old and the new SMD LEDs...the new ones are very slightly more orange...I am thinking one could probably fix this by using a bluish filter instead of the gray one I put into the frequency display...well, something for the next days. Now on to replacing the LEDs:

After removing the display and opening it up, I scraped the old LEDs out with a scalpel. This works very well. If it is moved parallel to the pads, it is virtually impossible to damage them. Then I studied a few more SMD soldering videos by Norman Mier on You Tube. I used his "dry tack" method to first fix the LEDs in place. To do this one first places a generous amount of rosin on the pads. Then grab the LED with precision tweezers and put it in an aligned location between the pads. Then take a very small amount of solder with the iron tip and briefly touch one side of the LED. After doing this with all of the LEDs, I then did Norman's "put solder wire halfway across the SMD tab to be soldered, and move the tip quickly in from the outside towards the pad". I held the tip for about 0.5 sec in place touching the LED to ensure good solder flow and bonding. The temperature of the iron was set to 340C. Here are a couple of pics of the result-much nicer than the mess I generated with the frequency display: 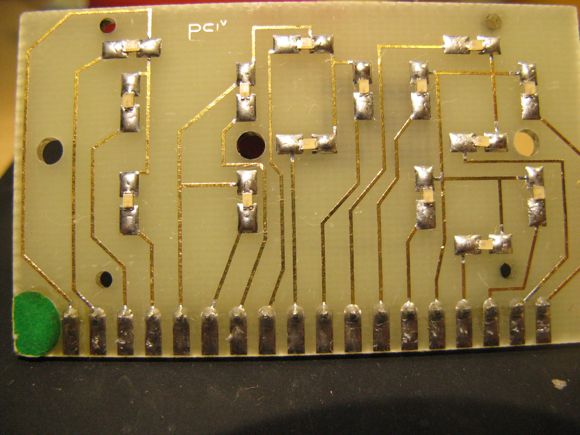 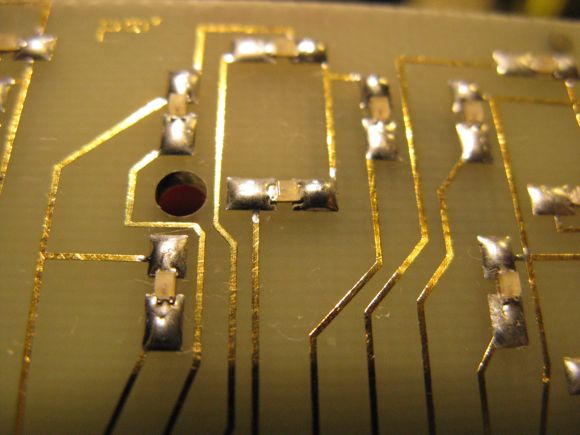 Even if some of the LED pads appear to be not coated by solder on the pic, they are. It seems that the pads usually only get a fairly thin coating during this soldering process. I tested the LEDs for mechanical stability with a tooth pick, and I was not able to damage the bonds even with quite some force.
Here is a picture of the display running. I plugged the pins into the female plug of an old parallel computer cable. The female plug at the other end of the cable was then connected to a breadboard's pos and neg rails with individual breadboard jumpers. 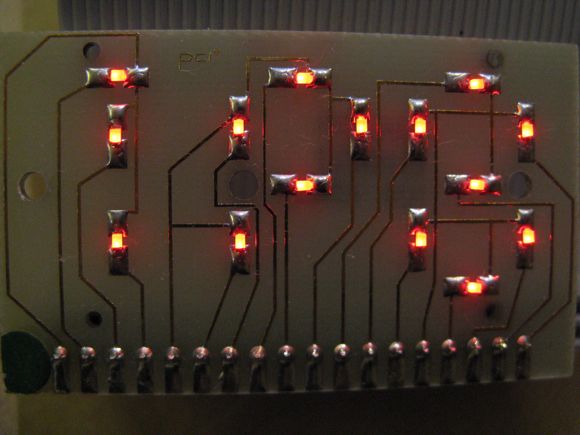