Here is a photo of my test leads connected to the main board of the Beogram 8002. 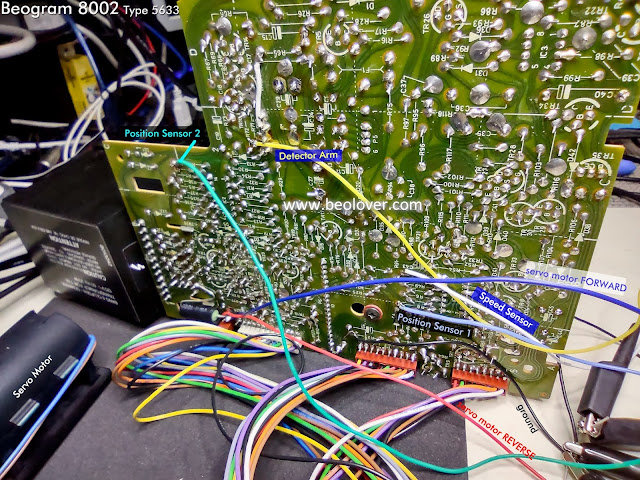 I have test leads for six Beogram 8002 signals -

My oscilloscope has four channels so I will just monitor what is happening on the servo motor and the position sensors first.

As a reference, here are the signals when the Beogram 8002 is parked in the Standby mode. 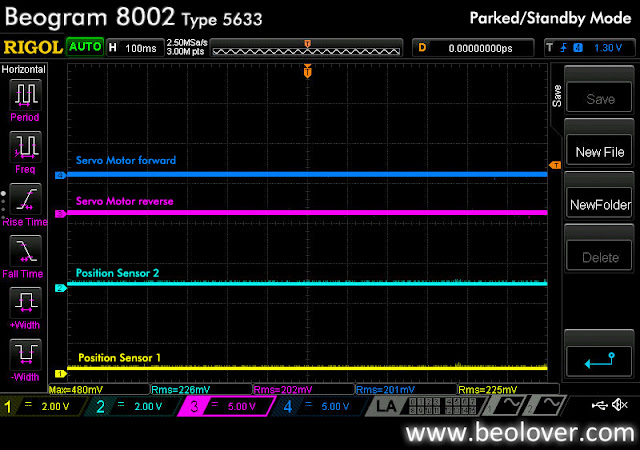 Pressing the Play button drives the Beogram tangential arm assembly forward and disengages the SO switch.
Notice there is a designed delay from when the SO switch disengages and the position sensors start to cycle. 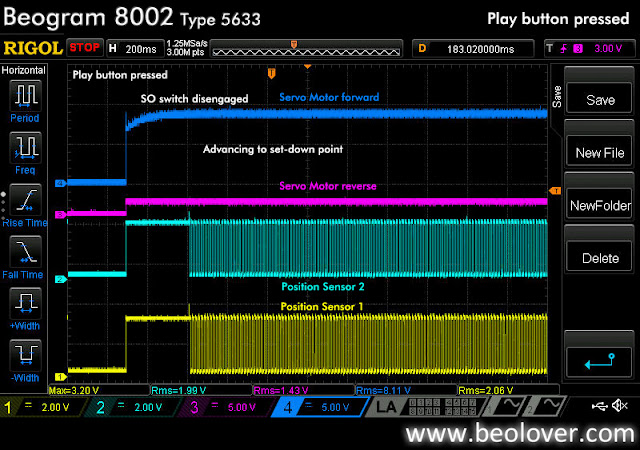 The servo motor advances the tangential arm assembly and detects a record on the platter.  The servo slows down the advance as it reaches the set down point and stops to lower the tonearm. 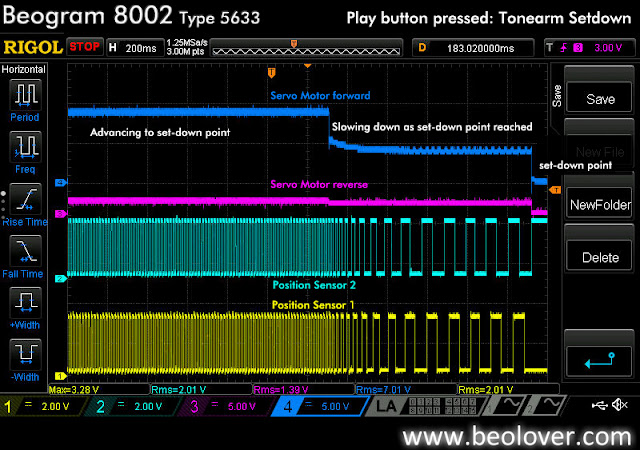 Once the tonearm sets down the servo will advance again as the tonearm moves through the lead-in groove of a record. 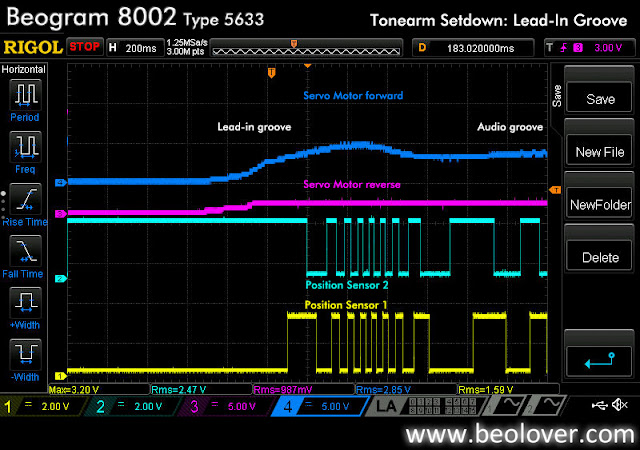 There will be periodic activity on the position sensors and servo forward voltage as a record plays and the Beogram keeps the tonearm tangential to the record. The position sensor signal pulses will vary depending on how much compensation the servo motor is told to adjust for by the tracking sensor. 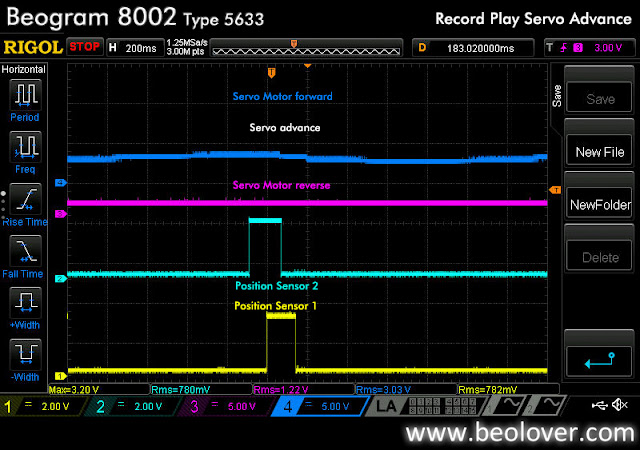 When the end of the record is reached the servo motor moves the tonearm through the run-out groove and stops. The motor reverses and begins the return of the tangential arm assembly back to the Standby mode position. 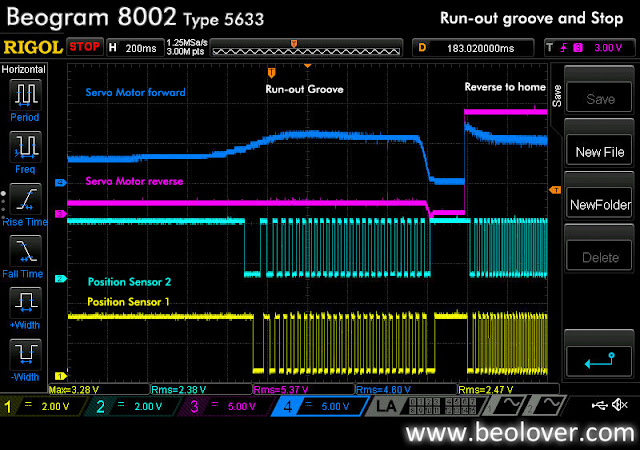 The reverse to home (or Standby position) can also be initiated during record play by pressing the Stop button. 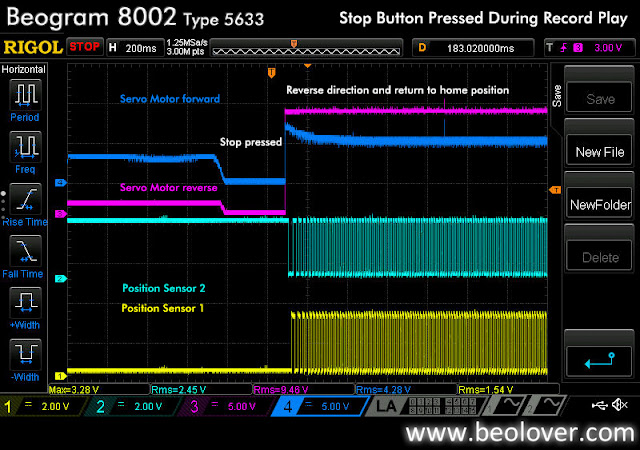 Another action that results in a return to the Standby position is when the fast scanning button is used to move the tonearm forward until the maximum forward position is reached. 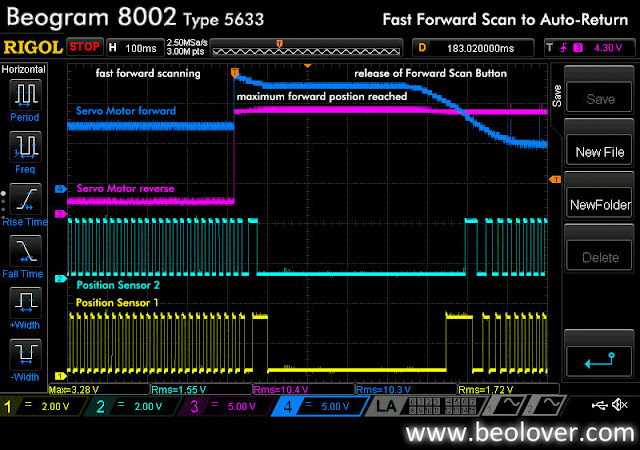 The Beogram 8002 servo control drives the tangential arm assembly back to home where the SO switch is engaged. 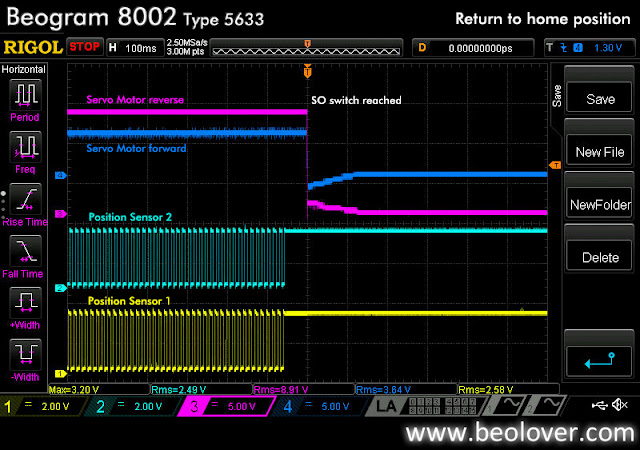 To look at the platter speed sensor and the arm detector sensor I swapped out those test leads with the two oscilloscope leads I had been using to monitor the servo motor.

I will just show one photo with these connected.
This photo shows the Beogram scanning for a record.  The position sensors show the tangential arm assembly is moving.  The speed sensor shows that the platter is rotating (at 33.3 RPM) and the arm detector sensor is showing pulses that indicate there is no record on the platter. Next I changed two of the oscilloscope probes to measure the forward servo motor command and the Beogram tracking sensor.
That meant adding the Tracking Sensor signal probe wire to the main board. 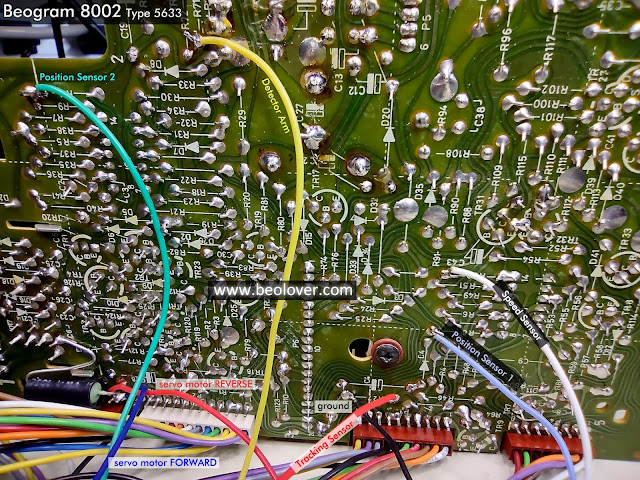 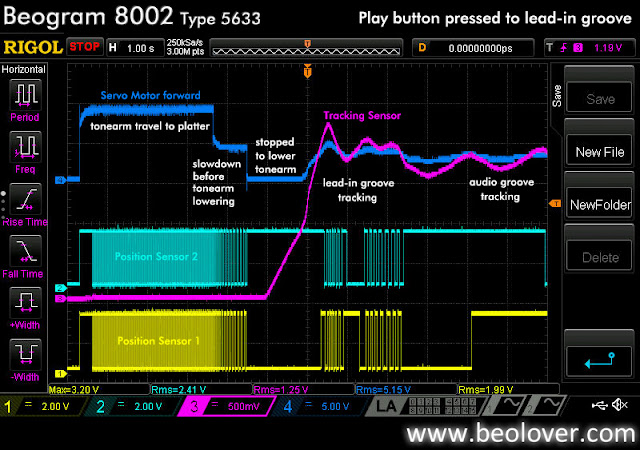 The following picture is the same scenario as the previous one except this is set to capture the first second of the press Play button event.  The position sensors don't begin counting until about 300 milliseconds after the tangential arm assembly starts moving. 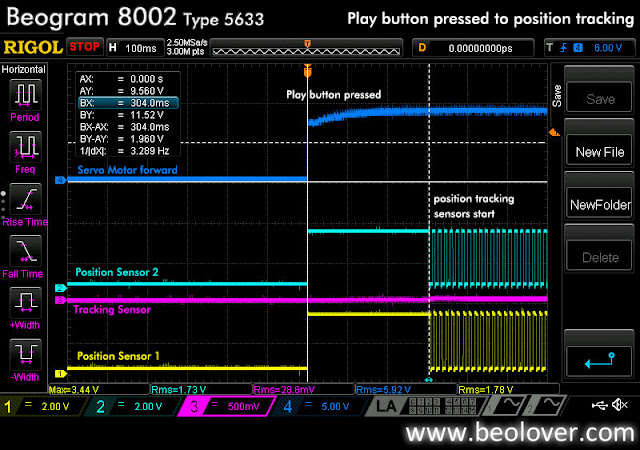 This picture is of typical record play events over a 12 second period. 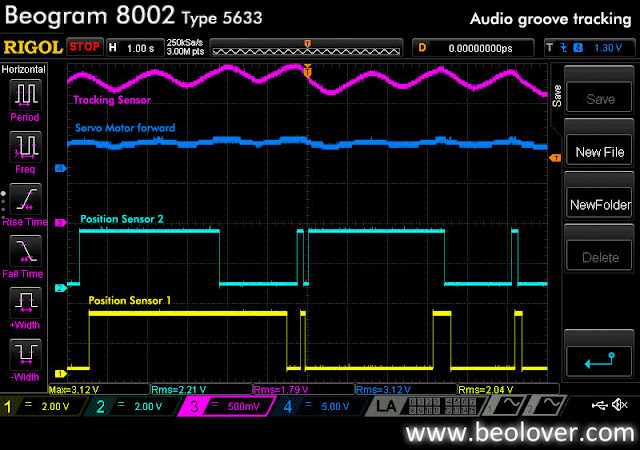 Finally, this is a picture of the end of record run-out groove event. 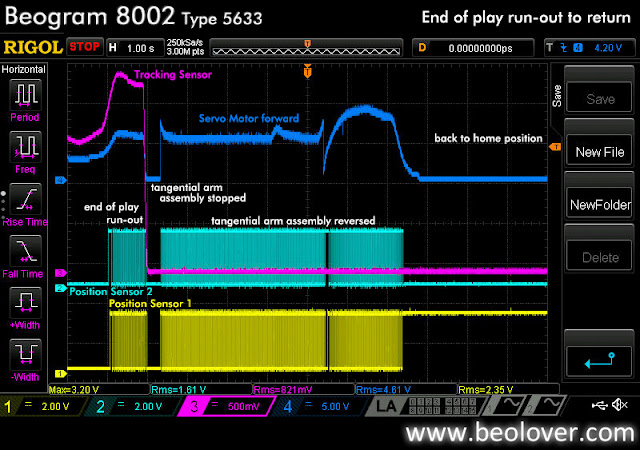 I am ready now to do some minor work on the Beogram 8002 cabinet and reassemble this turntable for the listening tests.
Posted by sonavoraudio at 8:58 AM